This Middle Eastern staple belongs in your refrigerator.

Yasmine Maggio
Associate Editor
Yasmine is an Associate Editor at Serious Eats. Her work has been featured in Women’s Health and on L’Officiel USA, and she recently graduated from New York University with a master's in journalism. You can find her at Bleecker Street Pizza on any given weekend.
Learn about Serious Eats' Editorial Process
In This Article

A plate of labaneh, drizzled with olive oil and sprinkled with za’atar, brings me back to my childhood, when I couldn't stand the stuff. It was often served as one of those meals of last resort, when there was nothing else to eat—there was always a tub of labaneh taking up real estate in our fridge. To me, it was boring, but my mother, who grew up in the Middle East, could eat it every day.

Not long ago, however, while I was sick, on antibiotics, and looking for a probiotic food to eat, I stumbled across the familiar sight of a tub of ARZ labaneh at the grocery store, so I decided to give it another shot. When I got home, I spooned some onto a plate, drizzled it with olive oil, gave it a sprinkle of sea salt, and scooped up a bit with a piece of toasted sourdough bread. My first bite was a surprise—why had I been so quick to dismiss labaneh when I was younger? Its pure dairy flavor, enriched by the fruity olive oil I'd skeptically poured over the top, salty and tangy all at once, was irresistible; instead of the memories of bland, we-have-nothing-else-to-eat meals, I found this simple plate of cultured dairy to be comforting and familiar, but also very, very good—incredibly good, really—to eat.

A Middle Eastern staple, labaneh is a savory dairy product that’s typically served at breakfast and enjoyed with pita bread; it's sometimes rolled into balls, marinated in oil and herbs, and served as a snack. (You'll sometimes see it spelled labneh, lebnah, labne, or labni, among other spellings, but labaneh is transliterated from Palestinian dialect and is the most accurate and closest to modern Arabic.) While labaneh is easy to find at Mediterranean restaurants and Middle Eastern markets, I've only started seeing it stocked in mainstream grocery stores more recently. If you see it at your local market, you're in luck; I recommend picking some up.

Labaneh is often classified as a “yogurt cheese.” It has a thick texture, similar to that of cream cheese, and a tanginess that lands somewhere between cream cheese and yogurt. Though made in the same way as yogurt, labaneh is traditionally made with goat's milk and is strained for longer, helping it achieve that thick, spreadable consistency—ideal for schmearing with a spoon and creating swirls in which olive oil can pool.

Reem Kassis, Palestinian cookbook author and Serious Eats contributor, notes that labaneh has been around since at least the Middle Ages. “Kitab al Tabikh is the oldest Arabic cookbook on record, and in it there are references to countless kinds of dairy byproducts [like] yogurt, cheese, labaneh, jameed, and more. Essentially, since humans learned how to sour milk into yogurt, this variation has been around.”

How Does Labaneh Differ From Other Dairy Products?

Aside from being strained more than other yogurts, Reem notes the second main difference is that labaneh is salted and distinctly more sour. “At least a good goat’s milk labaneh should be,” she says. “Many brands on the market today are not authentic labaneh, and are more of a thick-set Greek yogurt with minimal salt.”

How to Make Labaneh

If you can’t find labaneh at the grocery store, you can easily make your own at home with goat's milk yogurt or full-fat Greek yogurt (though it won’t have quite the right flavor if you use the latter), a fourth of a teaspoon of salt per cup of yogurt, and a cheesecloth. Drape a couple layers of cheesecloth in a bowl, spoon the yogurt in, sprinkle it with the salt, then bring up the sides of the cheesecloth and tie it into a tight, neat parcel; suspend the cheesecloth around something like the neck of your kitchen faucet or a cabinet handle, with the bowl placed underneath to catch any expressed liquid, for several hours. Alternatively, you can place the cheesecloth in a colander set inside of a bowl and allow it to strain in the fridge, anywhere from several hours to a day and a half, until it's reached your desired consistency. The longer the yogurt is left to drain, the thicker it will become; thicker labaneh is easier to roll into balls, if that's what you' prefer to do with it. You can also adjust the salt levels to suit your taste.

How to Serve Labaneh

Reem serves her labaneh the same way much of the Arab world does: spooned into a bowl with a well of olive oil in the middle and some za’atar on the side (though many choose to top it with the za’atar). “A lot of people have started experimenting and topping it with all kinds of things, from roast vegetables to salads,” she says. “Its used in Arab cuisine largely for dips and spreads, and there are many recipes for labaneh dips.” When served in this way, labaneh is most commonly scooped up with bread.

Aside from a classic plate of labaneh with some bread, or even just eating it with a spoon (one of the reasons it doesn't last very long in my fridge—it's that satisfying!), you can also use it in place of other types of cheese, spreading it on a sandwich or rolling it into balls and tossing them into salads. Due to its tangy, salty flavor, Reem doesn’t recommend baking with labaneh, and notes that it’s only traditionally used in baking applications as a topping for manaqeesh, a type of flatbread.

“At the end of the day, real labaneh is a salty, tangy, very thick yogurt, so it’s meant for savory applications, not sweet ones,” Reem says.

These days, when I open my fridge and see the tub of labaneh, it seems to make the other stuff in there pale in comparison, especially when I’m not feeling inspired to prepare a meal. Though I serve it a smidge differently than my mother—drizzled with olive oil still, but sprinkled with salt and black and Aleppo peppers, and served with some sourdough bread—that tub doesn't seem like its taking up otherwise valuable fridge real estate. The familiar design on the package, with its Arabic script, is a reminder of the deliciously comforting food it contains. And now, just like my mother, I could happily eat labaneh every day. 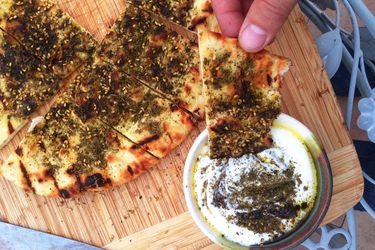