A quick primer on the sweet soy sauce that's beloved in classic Indonesian dishes, but capable of so much more.

Pat Tanumihardja
Born in Jakarta to Indonesian-Chinese parents and raised in Singapore, Pat Tanumihardja has been a food and lifestyle writer for over two decades. Her cookbooks include Farm to Table Asian Secrets (2017), The Asian Grandmothers Cookbook (2012), Asian Pickles at Home (2020), and Instant Pot Asian Pressure Cooker Meals (2020).
Learn about Serious Eats' Editorial Process

In my house, kecap manis, or Indonesian sweet soy sauce, is called "Opa sauce," in honor of my dad, my son’s opa. We call it that because my dad pours the thick, coffee-colored condiment over everything—fried fish (normal), steak (somewhat normal), and spaghetti (not so normal)—much to my mom’s chagrin.

My dad’s tastes in food are simple: He likes Asian food, and he likes it cooked by my mom. Any other dish can be fixed by drowning it in kecap manis. When my dad travels, he carries a miniature bottle of it, just like those airplane-sized Jim Beams and Johnnie Walkers, in his waist pouch, tucked in nice and snug next to his passport and wallet.

While I’m not quite as zealous in my use of kecap manis as my dad is, for me, and for Indonesians all across the globe, it’s an integral element of the food we grew up eating. Its unique flavor—part bittersweet caramel and part savory soy sauce—makes it as versatile as it is alluring: It’s both a necessary ingredient for many of the most famous dishes in Indonesian cuisine, and a wonderful complement to the flavors of any number of other cuisines from all around the world.

What Is Kecap Manis?

Kecap manis (also spelled the Dutch way, ketjap manis) is widely understood to be a local riff on Chinese soy sauce. In fact, the word kecap is derived from the Cantonese word koechiap, or "sauce," which is also the root word for the more-familiar-to-Americans ketchup.

Other kecap varieties include kecap asin (the Indonesian version of the salty soy sauce you probably have a bottle of in your fridge), kecap hitam (black or dark soy sauce), and kecap ikan (fish sauce). You can read more about soy sauces around the world here.

No one knows for sure when the original kecap—kecap asin, or "salty sauce"—was introduced to Indonesia. But printed materials dating back to the late 1600s describe the sauces saio ("shoyu") and catchup, both of which refer to soy sauce, being brought to the UK from the East Indies, now Indonesia.

It’s believed that kecap manis was invented sometime in the mid-19th century. When Chinese migrants settled on Java, Indonesia’s most populous island, they realized the local Javanese had a sweet tooth. So the Chinese added gula merah, or palm sugar (called gula jawa in Java), to soy sauce, and kecap manis was born.

It's since become a foundational element of Indonesian cuisine, and a huge industry unto itself: In his book History of Soybeans and Soyfoods in Southeast Asia, soy expert William Shurtleff reports that kecap manis accounted for 90% of the country's total soy sauce production as of 2010.

The kecap manis that’s available today is about 10 to 15% liquid soy sauce; a mixture of sugar and water makes up the rest, which accounts for its pronounced sweetness and syrupy consistency, and spices are sometimes included as well. The combination of sugar and soy sauce is responsible for kecap manis's opacity and deep black color, as opposed to soy sauce’s relative translucency and amber coloring. And the use of palm sugar specifically is key, furnishing smoky, savory undertones and caramel-like notes similar to those found in molasses, along with a richer color and unique aroma. Though many other Asian countries produce their own versions of sweet soy sauce made with white sugar, in my (completely unbiased) opinion, these qualities set kecap manis well above the rest.

How Kecap Manis Is Made

Many of the kecap manis producers in Indonesia today are second- and third-generation family businesses. Making it is done in two stages: brewing the soy sauce, followed by adding the sugar and other flavorings.

Soy sauce for kecap manis is produced in much the same way as traditionally made Chinese soy sauce and Japanese shoyu—namely, by using natural fermentation processes. Soybeans are cooked (and, afterwards, sometimes combined with roasted wheat); mixed with a mold culture of Aspergillus oryzae, or koji, called kapang in Indonesian; fermented in brine to build the sauce's deep-brown color and umami flavor compounds; and pressed to separate the solids from the liquid, leaving raw soy sauce behind.

The soy sauce is then combined with melted palm sugar, and, depending on the producer, herbs and spices, such as lemongrass, galangal, star anise, and/or makrut lime leaves, are steeped in the mixture.

Although over 50 different brands of kecap manis are produced in Indonesia and the Netherlands, only two brands are readily available in the US: Cap Bango and ABC. Conimex, a Dutch brand, is sometimes sold at specialty Indonesian stores. The ABC brand is more common in Asian markets, but I always pick Cap Bango, if available, for its thicker consistency and sweeter, more full-bodied flavor.

How to Use Kecap Manis

As we've already established, kecap manis is an essential component of some of Indonesia’s most famous dishes. More sweet than salty, it’s typically used alongside regular soy sauce, fish sauce, and/or salt for seasoning in traditional Indonesian cooking. Many Indonesian families—diaspora included—keep two bottles on hand at all times, one in their kitchen for use as a seasoning during cooking, and one on the table to serve as an all-purpose condiment.

The inclusion of kecap manis is one of several key features that distinguish nasi goreng, or Indonesian fried rice, from its Chinese-style counterpart. Beyond simply satisfying my Javanese sweet tooth, kecap manis balances out the saltiness of the many savory ingredients that go into the dish—which include regular soy sauce or fish sauce, but also shrimp paste (terasi), chili paste and/or sliced chilies, chicken, shrimp, and, if I'm cooking, often the Chinese sausage called lapcheong.

Similarly, babi kecap, an Indonesian-Chinese version of hong shao rou, or red-cooked pork, and one of my favorite childhood comfort foods, is defined by the use of kecap manis. While hong shao rou is usually made with sugar, light and dark soy sauces, Chinese cooking wine, and spices like star anise and cinnamon, my mom’s babi kecap consists of braised pork belly flavored simply with kecap manis, soy sauce and/or salt, and white pepper, then served over white rice and jazzed up with fried shallots on top. (All of these are simple tweaks you could make to our recipe for Shanghainese Sticky Red-Cooked Pork Belly.)

The peanut sauce accompanying gado-gado—a salad of sorts, made up of fresh and blanched vegetables, including long beans, cabbage, bean sprouts, and more, mixed with elements such as fried tofu and hard-boiled eggs—has kecap manis mixed into it, for a salty-sweet flavor profile. My mom’s ever-popular chicken sate (satay) owes its deliciousness to a mixture of kecap manis, crushed peanuts, chopped garlic and shallots, and the juice and leaves of makrut limes, which she uses as both a marinade and a glaze. The sugar in the kecap manis helps to give the sate a pretty, burnished sheen through repeated bastings as the meat is charred over a charcoal flame.

Kecap manis is also added to soto ayam (chicken turmeric soup), in much the same way hoisin sauce is swirled into Vietnamese pho, and I like to float chopped bird chilies and shallots in a dish of kecap manis to serve as a dipping sauce for fried fish. And Indonesians everywhere will often simply drizzle it over a fried egg and rice.

But you don’t have to restrict your use of kecap manis to Asian dishes. I like to marinate steak with a mix of soy sauce, kecap manis, and black pepper, the sweetness of the kecap manis eliminating the need for brown sugar or honey to intensify the meaty flavor of the beef. As with sate, the sugar content also promotes browning, giving the steak a lovely burnished crust.

For the same reason, I'll use it to marinate beef and pork for stewing, patting the meat dry before browning it; if you like your stews and braises tinged with sweetness, you can also add a glug of kecap manis to the stew itself. (I usually pour it in after I've added tomato paste and Worcestershire sauce to the base of a beef stew recipe.) Sometimes I’ll simmer together kecap manis, a touch of sherry, and butter for a sauce to serve alongside steaks or roasts.

Whole sides of salmon or arctic char—preferably skin-on—can be salt-and-peppered, grilled, and glazed with a mixture of sweet (kecap manis), tart (lime or lemon juice), and spicy (cayenne or hot sauce) at the tail end of cooking. Or, skip the glaze and simply squeeze lime halves over the cooked fish, then serve with a mixture of kecap manis, garlic, cilantro, and more lime juice. The sweetness of kecap manis and the brightness of citrus play nicely together, producing a balanced flavor profile that’s not too cloying.

If you want to start building an appreciation for kecap manis, the simplicity of nasi goreng makes a great introduction. With that in mind, I've attached a basic recipe for the dish here. The use of terasi adds a big hit of umami that sets nasi goreng apart from Chinese-style fried rice, but if terasi proves hard to find, the uniquely sweet-savory profile of kecap manis will still make this version of fried rice exceptional. 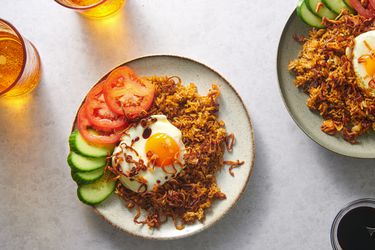 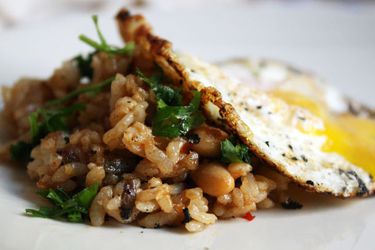