"What exactly is Icelandic food?" was the most popular question I was asked after returning from a week in Iceland. (Second place goes to: "Did everyone look like Björk?") To answer the first, the basic diet hasn't changed too much since the Viking Age, though of course chefs have become more imaginative with preparations over the years. The mainstays include: lamb, skyr, potatoes, fish, and other seafood. A lot of seafood. And how could they not being surrounded by bountiful Arctic waters of cod, haddock, monkfish, herring, skate, lobster, and salmon.

Minke whale is also swishing around up there, but eating whale is a little more complicated for many visitors. You'll see minke on menus—skewered as kebabs, in steak form, or seared like ahi tuna. And Icelanders will let you know that minke whale is not an endangered species, but for some visitors, it's still whale and that's a full-stop no-way, while others use the "I'll just try it once" rationalization.

I'd rather not get into the ethics of whaling here. An Icelandic chef handed us a bite and said, "here try this," so we did. The taste is somewhere between tuna and beef, but it really depends on who's preparing it. It can be overgrilled, tough and chewy with a pretty rank fish-oily flavor. Or if it's cured then lightly seared, like the preparation we tried at Fiskmarkaðurinn ("Fishmarket") in Reykjavik, it has a much more delicate flavor with a silky, reddish-purplish rare center.

So, that's whale. Let's move on to something less controversial: skyr. SKYR! The third most popular question from people was, "Did you eat skyr everyday?" And the answer would be a big fat yes. Actually, there's no fat in skyr. Made of pasteurized skimmed milk and a bacteria culture similar to yogurt (note: it's technically not yogurt, it's a soft cheese), skyr is rich and thick, but very healthy and not heavy-feeling. It has a wonderfully creamy, spoonable texture and tastes somewhere between tart Greek yogurt, creme fraiche, and soft-serve.

Icelanders eat skyr everyday, anytime: for breakfast, as a snack, in drink form (called "drykkur"), as a dipping sauce ("skyr-nnaise"), or with sweet toppings for dessert. They've also been known to sling it at the house of parliament during protests and wrestle in skyr at nightclubs. Is there anything skyr can't do?

Another iconic Icelandic food: the hot dog, or "pylsur." So why does everyone obsess over Icelandic hot dogs? Aren't they just hot dogs? Well, they're made with lamb in addition to the usual pork and beef parts. The lamb presence deepens its flavor, and even under a deluge of condiments, you can taste the lamby funk at the end. It was also by far the snappiest hot dog I've ever eaten. Like, you can hear the casing suh-nap as you bite.

The most famous pylsur kiosk is in downtown Reykjavik across from the harbor. It's called Bæjarins Beztu Pylsur, which translates to "the best hot dogs in town." Order it "eina með öllu" (one with everything) for the works: a sweeter brown mustard ("pylsusinnep"), ketchup, raw onions, crunchy deep-fried onions (see "Cronions" in the slideshow), and a mildly tangy remoulade. You could also order it "Clinton" style with just mustard, as the former U.S. president did on his visit in 2004, but they made fun of him in newspaper cartoons later for such a plain order. (How could you say no to fried onions?)

Lamb, that special flavor-boosting ingredient in their hot dogs, is one of the nation's greatest points of culinary pride.

Icelanders will tell you their lamb is better than any other lamb in the world, and it is really, really good. Probably because they let their sheep merrily roam free in the highlands and valleys to much on grass and herbs before being corralled in the winter. The result of such a luxurious life is very tender meat with a gently gamey flavor. We ate lamb one night with a Moroccan guy who said his mom's lamb was the best, until that night in Reykjavik (Moroccan Mom, you never read that).

There's plenty of meat available in Iceland that we didn't try: horse, reindeer steak, sheep's head, and fermented shark. (Ever see the No Reservations episode in Iceland where Anthony Bourdain calls fermented shark the worst thing he's ever—ever, ever—eaten?) The "try it once" rule didn't apply here for us.

SE editor Robyn, however, did head over to Fljótt go Gott, the cafeteria at the BSI Bus Terminal in Reykjavik known for its sheep's head, when she visited in 2009. Singed and de-brained then boiled, the sheep's head ("svið" in Icelandic) comes with mashed potato scoops and mashed turnip. If you're going to eat sheep's head in Iceland—and that includes the tongue, eyeballs and ears—it should be at Fljótt go Gott.

"Icelanders don't eat the brain, as far as I know. It only takes about a minute to eat the parts worth eating. The best part was easily the tongue," said Robyn.

Moving on to the list of "cute birds that seemed too cute to eat, but then we ate them" was the puffin. Just look at that guy. Could you really eat such an adorable horn-billed seabird? I didn't think so either, but then he was part of a special multi-course meal, so we tried him...and kind of really liked him. "Lundi" in Icelandic, the puffin meat is usually smoked to taste almost pastrami-esque, or broiled in liver-like lumps.

While you can find all of the above land and air animals on menus, the emphasis is still on the sea. In addition to eating fish for main meals, Icelanders snack on harðfiskur, what's basically fish jerky. The wind-dried haddock, which they usually spread with butter, comes in various forms: as thin chips, feathery-soft strips, or brittle crunchy pieces.

A word of caution about harðfiskur: this stuff is really fishy. The scent brought me right back to feeding my goldfish those orange flakes from the pet store in first grade. That's how fishy it smells. We had to double-bag the harðfiskur leftovers to avoid fish-air in our little rental Suzuki. And SEHQ is still Febreeze-ing out the smell after I brought some in.

Somehow after a whole week, we left without trying pönnukökur, the Icelandic pancakes. (If only the president of Iceland had invited us over to eat them with him!) They're thin, sweet, and usually rolled up with jam, powdered sugar, or cinnamon, similar to crepes.

As for sweets, black licorice, as with the rest of Scandinavia, can be found all over the candy aisle—in swirly shapes, in chocolate bars, in long laces and ropes. You'll also find its harsher, crazier cousin: salt licorice.

If you're into that assertive black licorice flavor, then you might like Iceland's national drink, Brennivín . Nicknamed "black death," the caraway-flavored schnapps is reminiscent of Aquavit but not as deathy-tasting as you'd think. It's customary to drink a shot after some fermented shark. We opted to skip the shark and sipped it neat. Skål! (That's the Icelandic cheers.)

Potatoes, in general, are a staple vegetable in Iceland (and distilled for all that Brennivín). Because of Iceland's long, harsh winters, their crop growth is very limited. Much of it happens in greenhouses powered by geothermal energy—the same energy responsible for the steamy, mystical Blue Lagoon! They yield gorgeous veggies you might think they came out of California but were actually grown in towns like Hveragerði, or "the Blossoming Town."

This is just an introductory guide to Icelandic cuisine. There's plenty more we didn't try, plenty more you should fill us in on here. My one very basic piece of advice for people visiting: eat as much fish as you can. With such an active fishing industry, it was probably caught that morning. Also, skyr. Eat it all the time. And again, it's technically not yogurt.

Have you ever been to Iceland? What'd you think of the food? 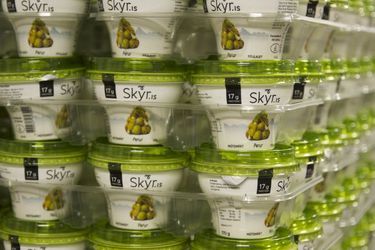 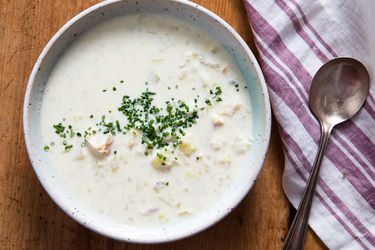 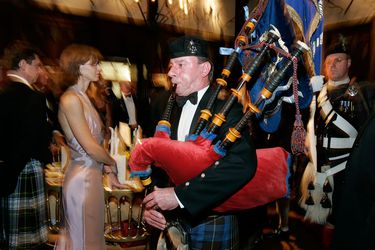 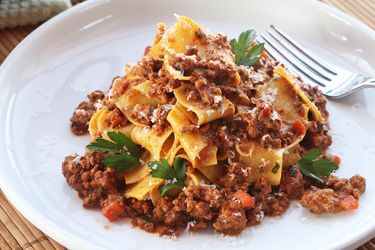