There are so many misconceptions surrounding absinthe, and it's time to set the story straight. Today, I'll discuss some history and clear up any confusion you might have about the difference between absinthe and pastis. And because we're here to drink, I'll finish with a collection of five essential absinthe cocktails to make at home (or order at your favorite bar.)

When I wrote about gin, I mentioned that there are two types: distilled gin and compound gin. Distilled gin is made by taking a mix of fermented grains and aromatic herbs and then distilling them together to make gin. In some cases, distillers take grain alcohol, steep the juniper and other botanicals in it, and then redistill the mixture.

Compound gin is made by taking vodka or grain alcohol and steeping juniper and other botanical herbs in it until it tastes, well, ginny. Bathtub gin is made this way, and you can find recipes online and even gin-making kits for the home that use this method.

Absinthe can be made using similar methods. Distilled absinthe is made by steeping herbs and botanicals in grain spirits before distillation. (I'll have more detail on that in a moment.) "Compound" absinthe is known as cold-mixed, and it's made just like compound gin. And like compound gin, it generally has harsher flavors than the distilled product.

As with gin, stick with the distilled product.

Distilled absinthe starts with high-proof neutral grain spirits. The anise, wormwood, and other botanicals are macerated in the spirits for 12 to 24 hours, in the pot of an alembic still. Then, the spirits and botanicals are distilled together. The essential oils of the botanicals vaporize along with the alcohol before condensing together into liquid.

Absinthe at this stage is clear and can be sold this way, as absinthe blanche. Most absinthe, though, has an additional maceration stage. A fresh batch of herbs (commonly, hyssop, melissa, and petite wormwood) are added to the spirit, which is then gently warmed. This process imparts subtle additional flavors and the green color for which absinthe is known. The color comes from chlorophyll in the herbs; absinthe's traditionally high proof comes about because chlorophyll will break down in lower-proof spirits, turning the drink a muddy yellow or brown.

A good absinthe will have a licorice flavor from green anise, and if that's not your thing, well, I understand. But a really good absinthe will carry other herbal flavors as well, balanced with the anise, resulting in a bittersweet spirit tasting of licorice and herbs. In addition to green anise, absinthe contains sweet fennel, grand wormwood (more on that in a moment), and other herbs, such as hyssop, angelica, and peppermint.

Absinthe may be either green or colorless, but do your research. A green absinthe may have that color from the natural herbs uses in its production, or it may be artificially green. A proper French absinthe will have a light olive color. If the spirit looks bright green, like Midori, it's probably artificially colored.

Although absinthe is sometimes called a liqueur, it's more accurately a spirit, as it doesn't contain any added sugar.

Although a lot of rumor and innuendo surround the drink, absinthe is simply an anise-flavored spirit, created in 18th-century Switzerland as a medicinal tonic. It became popular in France during the 19th century; though we think of it as a drink enjoyed by artists, writers, and musicians, it was commonly quaffed by French persons of all classes.

What really stoked its popularity, though, was the phylloxera epidemic, which virtually destroyed the French wine industry in the late 1800s. French drinkers turned to absinthe when stocks of wine ran low.

Today, we know that wormwood, despite its reputation as a hallucinogen, has no such effect in absinthe. Historically, people thought it did, and that misconception lasted until pretty recently. Wormwood contains thujone, which was thought to have psychotropic effects. (Thujone has a similar molecular structure to THC, the active psychotropic substance in marijuana, leading some to believe it acted the same way on the brain; we now know that it doesn't affect the brain in the same way as THC.)

Studies done in the last decade or so, however, revealed two things. First, thujone does not in fact cause hallucinations. (It can cause convulsions and even death, but the dosage needs to be far higher than you'll find in absinthe. If you wanted to kill yourself with thujone, absinthe isn't the way to do it; you'd die of alcohol poisoning first.) Second, thujone only appears in absinthe in trace amounts. Since thujone is also found in oregano, sage, and some species of mint, you're as likely to consume it at Olive Garden as you are at The Old Absinthe House on Bourbon Street.

Even so, absinthe developed a reputation at the tail end of the 1800s as a drink that made people crazy and sick. Why? A couple of reasons. First, the sheer popularity of the drink drove unscrupulous producers to take shortcuts; the industrial dreck they made was somewhat poisonous.

Second, even well-made absinthe—hell, especially well-made absinthe—is high in alcohol content. See, the chlorophyll that colors the drink is volatile; it breaks down easily and quickly in lower-alcohol concentrations. This results in absinthes that are muddy and unpleasant. Absinthe must be at least 60% alcohol by volume to preserve the color; many are even higher.

So, what made people sick? It wasn't the wormwood. It was the alcohol. Try drinking shot after shot after shot of overproof rum or vodka. By the time you're done, you might act a little nutty too.

Bans on absinthe began to topple around the world in the early 2000s, as manufacturers and aficionados petitioned government agencies to reevaluate the science of absinthe making. Dozens of brands are now in production around the world.

What's the Difference Between Absinthe and Pastis?

Nevertheless, misconceptions about wormwood, coupled with the violent behavior that accompanied nights of drinking a 125-proof spirit, led officials in France, much of Europe, and the United States to ban wormwood from alcoholic beverages. Unfortunately, the major absinthe houses had a lot of money at stake, so in 1932 one of them, Ricard, developed a wormwood-free variation on absinthe, called pastis.

Pastis is distinct from absinthe in a couple of other ways, though. Not only does it lack wormwood, it also lacks the green anise that lends the licorice flavor to absinthe. Instead, it uses a milder flavoring, star anise. Pastis contains added sugar, which makes it a liqueur instead of a spirit, and it's bottled at 40% alcohol by volume, instead of absinthe's 60%+.

Although today, several different brands of absinthe are available on the U.S. market, it can still sometimes be hard to find. The best brands, I should add, also tend to be a little pricey. (I personally like Kübler, Obsello, and Vieux Carré Absinthe, as well as Marteau, La Clandestine, and Lucid; I've heard good things about Leopold Brothers, Vieux Pontarlier, and St. George, but I've never tried them.) You can substitute pastis in place of the absinthe in most absinthe cocktails; indeed, for nearly a century, bartenders had to do just that.

But if you have the wherewithal to find true absinthe, I think you'll find that its unique flavors make these cocktails simply taste better. Shall we get drinking?

The Sazerac may be the most common gateway to absinthe cocktails. I'd guess that many people who've never had absinthe in any other form have had it in a Sazerac. The marriage of flavors in this drink is nearly perfect. The spicy nature of rye whiskey is softened ever so slightly by simple syrup. Peychaud's bitters provides an anise note that complements both rye and absinthe. You might think that having anise in both the bitters and the absinthe would be redundant and overpowering, but the secondary flavors in Peychaud's are traditional bitters flavorings: warm spices and gentian for bitterness. These help tame the licorice notes of the absinthe.

The absinthe is definitely noticeable in the Sazerac, but even licorice haters will usually agree that it harmonizes so well with the other ingredients that it's easy to enjoy.

Not much more than an enhanced rye Manhattan, the Remember the Maine is another good gateway drink for absinthe novices. The cherry liqueur adds a soft, mildly sweet and fruity taste, whereas the absinthe provides, as Paul Clarke noted in this space a few years ago, a "hint of savagery."

You'll note that the first two drinks I've mentioned are rye cocktails. This isn't accidental: rye pairs up very well with absinthe. For those who want to experiment with using absinthe in other drinks, try using an eyedropper to add small amounts to other rye cocktails and see what works for you.

Likewise, if you're at your local farmer's market, and you find the herbs anise hyssop or tarragon, try making an herbal simple syrup from them and then flavor a rye old-fashioned with them. They have subtle anise notes that also taste great with rye.

Well-balanced, not too boozy, the Corpse Reviver No. 2 is a perfect hair-of-the-dog drink, and that's precisely why it was invented. The CR2 offers gin, Lillet, lemon, Cointreau, and a drop of absinthe to make a drink that's as refreshing at brunch as it is bracing right before dinner. The anise in this drink is subtle, but it still doesn't get lost behind the other ingredients.

Another drink in which the absinthe is an accent, the Pan American Clipper uses apple brandy, lime juice, and grenadine, with a hefty 3 dashes of absinthe. The absinthe really tastes great with these fruity flavors, which leads to another hint about using absinthe in cocktails: anise-flavored spirits are excellent with fruit. Think of how often star anise is used in pies and cobblers.

Incidentally, the Pan American Clipper, in addition to being delicious, has one of the best names around, harking back to an era when transoceanic air travel was glamorous and exciting.

The drinks I've mentioned above mostly use absinthe as a tertiary ingredient, a flavor enhancer that adds herbal notes to the drink while complementing the base spirit and other ingredients.

For those who want to try a drink that lets absinthe's freak flag fly, though, this drink is for you. It's a simple affair: absinthe stirred with simple syrup or sugar (and an optional hit of anisette), then shaken with ice and strained into a glass filled with crushed ice and topped with soda water.

In New Orleans, where absinthe has always been big, and where, some say, it remained clandestinely available even during the ban, the absinthe frappe is a staple.

What's that, you say? I've left out the absinthe drip? Sure, I have. It requires an absinthe spoon (though a cocktail strainer will work in a pinch) and either an absinthe fountain or a patient hand. Frankly, it's kind of a pain, but I know that some people love it.

Okay, here's how you make it:

Add the water slowly so that it has time to dissolve the sugar. As the water enters the absinthe, it releases oils in the drink that causes it to louche, or cloud up.

Are you an absinthe lover? How do you drink it? 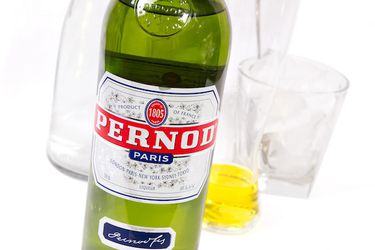 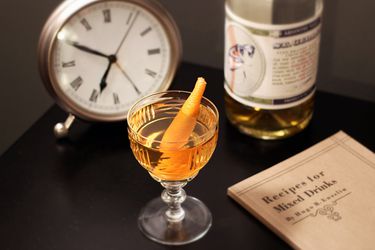 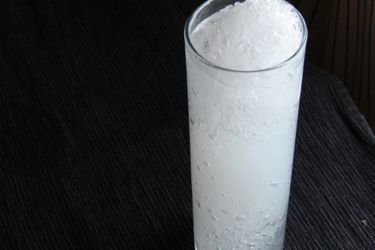