My daily poison is two shots of espresso with a dollop of condensed milk. I've been drinking the stuff forever (my grandma makes very potent coffee with pantyhose—otherwise known as "the sock"—and also introduced me to the pleasures of dipping Marie biscuits and fluffy white bread in said brew for breakfast). Last week, my colleagues walked in on my coffee ritual and did a collective double-take.

"What's that?" they asked, "You don't use creamer? What about half-and-half? No sugar? Not even fake sugar?"

I had to explain that I like my coffee uber-strong. That the average percolated coffee reminds me of the water used to wash out the coffee machine. And that I find condensed milk ideal for enriching coffee because it does so without diluting the flavor of the coffee.

As it turns out, my colleagues have never used condensed milk in anything other than the likes of Key lime or lemon meringue pie, fudge, flan, and random candies. I have therefore taken it upon myself to spread the good word on condensed milk: its versatility, its economy, its utter gloriousness.

My absolute favorite use of condensed milk is in coffee, of course. Hot, or iced, Asians and Europeans have a common love for very strong coffee with little frou frou. The iced version, I've been told, tastes like the equivalent of a double scoop of vanilla ice cream melted into a coffee milkshake - just think of the calories (and arteries!) saved with just one tablespoon of condensed milk in a double shot of espresso.

My second favorite use of condensed milk is to whiz a generous dollop of it with the flesh of a ripe avocado and a handful of ice to get a Pinoy favorite: avocado milkshake. Don't knock it before you've tried it—the stuff is rich, creamy, and compelling. And so is a simple avocado when halved, pitted, and cradling condensed milk in its hollows—one minute of prep and you're ready to dig in.

In Chinese restaurants, a common dessert is fried mantou or buns served golden brown, crisp-crackly on the outside, fluffy soft on the inside, and piping hot all over. These are dredged in an accompanying bowl of condensed milk by eager diners trying not to burn their fingers (or mouths).

The same condensed milk treatment is given to crepes and roti prata (flaky, many-layered flatbreads, crisp and rich with ghee - what I like to call the "Asian croissant"), which act as vehicles for delivering milky goodness.

Thick toast griddled over a charcoal fire, then slathered with peanut butter and liberally drizzled with condensed milk is a Hong Kong cha chaan teng (tea house) institution. As you can guess, the concoction is sticky, rich, and sweet enough to leave one feeling slightly queasy—unless shared with fellow dessert fiends. A more restrained version can be made at home: simply make toast and drizzle with condensed milk. You could of course, up the ante by making French toast. Or Nutella-stuffed, banana French toast. In fact, Nestlé even makes convenient squeeze bottles of the stuff to facilitate no-mess drizzling.

At roadside ice-cream carts in Asia, ice-cream sandwiches (a slice of white bread enveloping scoops of Neapolitan ice-cream) can be ordered with healthy lashings of condensed milk atop. And if that doesn't cool you off enough, you can go on to order shaved ice desserts drizzled with rainbow hued syrups and yet more condensed milk.

But the one use of condensed milk that surprised even my espresso-and-condensed milk-loving/maniac alfajor-baking Argentinean housemate is as a shortcut to making dulce de leche. Seriously. Instead of standing over a stove and stirring milk and sugar for hours, waiting for it all to reduce to a beautiful, buttery caramel, you can simply pressure cook condensed milk - while they're still in their cans. The recipe is simple: Remove the paper liners on the cans, submerge the cans completely in water. Pressure cook the cans - 30 minutes for a more spreadable product (for sandwiching lemony shortbread before rolling in desiccated coconut, for instance), and 20 minutes for a more pourable product (to replace boring old buttercream on cake). The cans won't explode, I promise. But you have to be patient and wait till the cans are completely cool before opening.

And then, it's just a hop, skip, and flourish of a can opener before the grand harvest. Oh, and here's a tip: condensed milk is way cheaper in ethnic grocery stores. For some strange reason, the cans usually run upwards of $3 each in my local Safeway, but the same Nestlé brand (albeit with Chinese and/or Vietnamese characters) retails for only $1.40 each at Ranch 99. Make sure you read ingredient labels though—some brands of condensed milk contain palm oil. You want to be sure to get the pure milk and sugar ones as I'm fairly certain that the palm oil will mess with your finished dulce de leche! 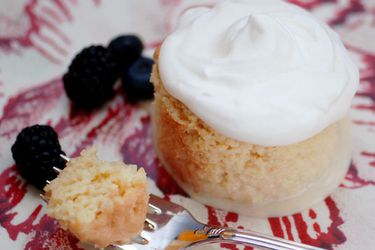 What to do With Leftover Condensed Milk 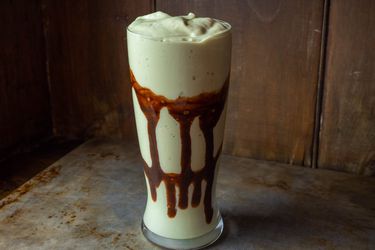