I use January recipe testing as an excuse to eat all sorts of things that are bad for me. Aside from the quesos, meatballs, and stuffed peppers, the entire month is really just a chicken wing gorge-fest. I could think of endless ways to cook up my favorite of all party foods, and in the span of the past few weeks I've grilled and fried six different variations. Each of those had their own glories to bask in, but the one that excited me the most are these spicy cumin wings.

Ever since my first taste of spicy cumin lamb noodles at the now-infamous Xi'an Famous Foods in the subterranean Golden Mall in Flushing, Queens, I've been infatuated. The earthy and pungent cumin of Middle Eastern influences mixes with more traditional Chinese ingredients like soy sauce, garlic, and sherry to create flavor that's wholly unique and incredibly crave-worthy.

Over the summer I took my first stab at bringing that flavor home with grilled spicy cumin lamb skewers, which succeeded in getting a close approximation what I set out to recreate. It's been a recipe that's been in my mind a lot since I first cooked it, and in the midst of this wing mania I had going on, I saw an opportunity to bust it out again and see how it would adapt to chicken.

I had to take a step back from my original recipe at the outset to make it meet the unique challenge that is wings. Those lamb skewers mixed all the spices and wet ingredients together as a marinade, which worked well for lamb, but I was afraid that soaking chicken in it would add too much moisture to the skin and result in flabby wings. So I split the recipe in two parts, putting most of the spices together as a rub, and using the liquids as a finishing glaze.

Into the rub went the required hefty portion of cumin*, ground Szechuan peppercorns, salt, and baking powder—which helps in getting a crispy and textured skin on ovn or grill-roasted wings. I coated full wings in this mixture, set them on a wire rack, and let them air-dry in the fridge overnight (another technique to aid in crispy skin).

*I originally added whole cumin seeds to the rub as well, but those all fell off during cooking, so I left them out of the final recipe.

As the wings rested, I had ample time to contemplate what to do with the sauce. I knew it needed soy sauce, sherry, and garlic to get the overall flavor profile I was aiming for, but I decided to take things a little further this time around.

To ensure maximum spiciness, I started the sauce off by slowly cooking red pepper flakes and garlic together in a bit of oil. To the infused oil, I added soy sauce, sherry, rice vinegar for a bit of tang, and a little sesame oil for that roasted sesame undertone. The sauce was certainly packed with flavor at this point, but I worried its thinness wouldn't effectively coat the wings later on, so I let the mixture simmer until it was thickened into a light glaze, which simultaneously concentrated its intensity.

To grill the wings, I went with my tried and true method of setting them over indirect high heat until they're browned and crisped. Since these were whole wings, though, I first skewered them, stretching them out along the wooden stick to make sure as much skin was exposed as possible to help create a consistently cooked and crunchy skin.

As the wings finished their time on the grill, they weren't quite as crisp I'd hoped. So to give them a little more crunch and color, I quickly set them over direct heat until they developed some attractive grill marks.

Then, just before pulling them off the grill, I gave each wing a brushing of the glaze, which turned them from a dry earthy yellow to a glistening, attractive brown.

Man, were these wings something else. They pack enough heat to give your lips a little tingle, but not so much that it masks the cumin centerpiece. The sauce has a great salty and sour depth that achieves the same intoxicating flavor combination of that original influential dish, albeit in a bold and different balance that seems more fitting for a wing. As much as I love this recipe, I can see them being a challenge for those unfamiliar with the spicy cumin gospel. But hey, that's why there's a game day wing to fit just about every taste out there. 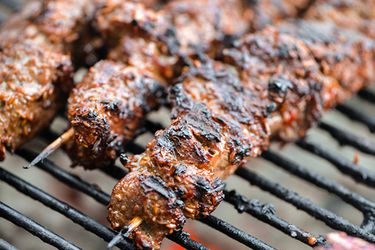