An improved setup for skewers brings these grilled wings closer to the heat, while a marinade based on Turkish hot pepper paste infuses them with roasted-chile flavor.

When I decided to work on a series of grilled-meat-on-a-stick recipes, I asked my Serious Eats coworkers to list their favorite skewered foods, in hopes of finding some dishes that could be mined for recipe development. Our editor, Sho, always a source of great ideas, replied to my request almost immediately: "Grilled Turkish chicken wings. They're ridiculously good."

I was instantly sold, but, having never been to Turkey, I needed him to fill me in on the details of these chicken wings. Sho proceeded to explain how he had eaten more than his share of these wings when he was last in Turkey, having sought them out after reading Kenji's mouthwatering report of the best things he ate on his own visit to Istanbul a few years ago.

In his account, Kenji describes the wings, called kanat and found in most Turkish kebab shops, as being "marinated in chiles and spices" before they're "threaded on skewers, [and] grilled over charcoal." After pressing Sho for a from-memory description of the spices and chiles that he thought went into the marinade ("hot pepper paste and cumin"), along with some YouTube and Instagram recipe-sleuthing deep dives, I gathered a spread of usual-suspect Turkish pantry ingredients and began experimenting.

It would have been foolish to try to faithfully re-create a marinade for a dish that I had never actually eaten myself, so I set out to just make a really tasty version of my own that fits with the spirit of the wings that Sho described to me.

The marinade that I came up with starts with biber salçasi, a Turkish pepper paste that's sold in both sweet and hot varieties. Seeing as these wings are meant to be spiked with chiles, I opted for the hot version. Biber salçasi is a great base for a marinade; it has a thick and sticky consistency similar to that of tomato paste, and a deep roasted-chile flavor that packs plenty of slow-building, mellow heat, but also some sweet sun-dried-tomato vibes.

A little smoky isot pepper (often labeled urfa biber or Urfa pepper here in the States) and paprika round out the chile notes, and a touch of pomegranate molasses provides sweet-tart balance to the heat, while also giving the marinade some viscosity. Minced garlic and chopped fresh parsley bring freshness to the mix, and it all gets brought together with a healthy glug of extra-virgin olive oil.

After stirring everything together, I set a portion of the marinade aside to use as a dipping sauce for the wings once they finish cooking on the grill. The remaining marinade gets tossed with fresh chicken wings that have been split into flats and drumettes.

I let the wings marinate for at least one hour and up to 24 hours. Marinades are really just surface-level flavor treatments, but that's not a letdown with chicken wings, since there isn't a ton of meat on them to begin with.

After marinating, I thread the wings onto pairs of metal skewers that are set a little over an inch apart. This double-skewering method, used at Turkish kebab shops, makes the wings much easier to move around on the grill, which in turn means you can cook them at an even rate.

If you've ever spent most of your time at a cookout flipping wings one by one with a pair of tongs, then you'll appreciate the efficiency of this dual kebab-spearing method. Because they have different shapes, and cook at slightly different rates, make sure to thread the flats and drumettes on different sets of skewers.

Thread the flats between the two bones on each piece, bunching the pieces tightly together. For the drumettes, alternate the orientation of the pieces on the skewers, so it's like they're sleeping head to toe in a cramped tent.

Once all the wings are skewered, it's time to grill. I highly recommend taking the time to set up the improved kebab-grilling rig that I've developed, making sure to adjust the distance between the bricks to accommodate the length of your skewers.

For these wings, you can either cook them directly over the coals, as with my al pastor skewers, or on top of a mesh wire rack set over the bricks.

I arrange the lit coals for two-zone direct-fire cooking, then rest the skewers over the bricks, with half of them directly over the coals and the other half on the cooler side of the grill.

Turn the wings over the hot side constantly, until the skin on them has begun to char. Then switch them over to the cooler side of the grill, and move the cool-side skewers above the coals to char them up.

This constant movement helps manage flare-ups, while keeping the cooking time to a minimum. You're looking to get a decent amount of char on these wings, so don't be afraid of occasional flare-ups licking up the sides of the skewers. You just don't want them to be engulfed in flames.

Once the wings are just cooked through, get them off the grill and let them rest for a few minutes, which allows them (and the hot metal skewers) to cool down slightly. Slide the wings off their skewers, and serve them up with the reserved marinade for dipping.

This recipe has been updated with guidance on how to prepare it using a gas grill.

Isot pepper is often labeled urfa biber or Urfa pepper in the United States and is also available at Turkish markets or online. If it's not available, simply omit.

This recipe was specifically developed and tested using a high-heat skewer-grilling setup. Converting this recipe to a standard charcoal or gas grill is possible, but will change recipe times and instructions in ways it hasn't been tested. If you do want to use a standard grill, set it to direct charcoal grilling/all burners on high heat, and cook until wings are lightly charred and cooked through. Gas grills tend to be less powerful and more uneven than charcoal, so we highly recommend a device like the GrillGrate to improve heat intensity and evenness of heating.

The grilled wings are best enjoyed immediately. The marinade can be made in advance and refrigerated for up to three days. The wings can be marinated for up to 24 hours. 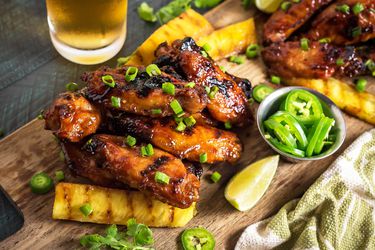 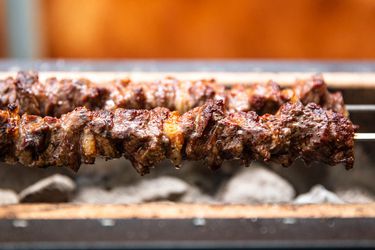