If you want to make Korean-style barbecue at home, beef galbi is a good place to start.

Sasha Marx
Senior Culinary Editor
Sasha is a senior culinary editor at Serious Eats. He has over a decade of professional cooking experience, having worked his way up through a number of highly regarded and award-winning restaurant kitchens, followed by years spent in test kitchens for food publications.
Learn about Serious Eats' Editorial Process
(6)
0

When we published a list of our possibly unpopular, but very correct food opinions, it felt really good to get some long-held weight off my chest, including my stance that American barbecue is overrated. Like camping, I like the idea of American barbecue—unfussy, communal feasting centered around large pieces of meat is definitely something I'm very into—but once I'm in it, I quickly transition to being over it. I like when the smoke is imparted to food with a can't-quite-put-your-finger-on-it restrained touch. With American barbecue it's front and center. I quickly hit the palate fatigue wall, and I've come to terms with the fact that it's just not my bag.

The thinness and large surface area of LA-style galbi make it a great cut for marinating (which is a surface-level treatment), and quick, direct-heat grilling. Unlike the spicy-sweet profile of Korean barbecue dishes like buldak (Korean fire chicken), beef galbi is a dish that focuses on the balance of sweet and savory. Soy sauce is the backbone of the marinade, providing salinity and umami; it also gets sweet notes from fresh Asian pear and brown sugar; allium bite from onion, garlic, and scallions; subtle bitterness from sesame oil and seeds; and background floral heat from fresh ginger and ground black pepper.

Flanken-style beef short ribs are thin, long pieces of short rib that have been cut crosswise through the rib bones. They can be found at Korean markets, where they are usually labeled "LA-Style Galbi," or can be cut to order at good butcher shops. 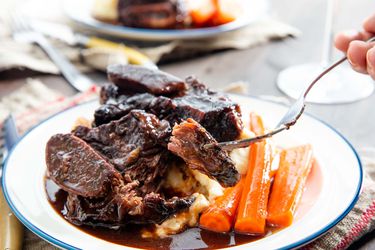