J. Kenji López-Alt
Culinary Consultant
Kenji is the former culinary director for Serious Eats and a current culinary consultant for the site. He is also a New York Times food columnist and the author of The Food Lab: Better Home Cooking Through Science.
Learn about Serious Eats' Editorial Process
2:52

I've been close friends with pozole rojo—the Mexican meat and hominy soup flavored with dried red chilies—for years, but only vaguely acquainted with pozole verde, its heartier, greener cousin that comes from the mountainous state of Guerrero. I'd made Rick Bayless's version from Authentic Mexican years ago, and was familiar with the one Diana Kennedy writes about in Mexico: The Cookbook. When my wife, Adri, and I were in Mexico City last year, I was hoping to get a few educational tastes of it, but alas, it was not to be.

If you've ever cooked that great Bayless recipe, you'd know that it's a beast. Dried hominy soaked and cooked for hours. Pork and chicken simmered, skimmed, and picked. Pumpkin seeds toasted. Tomatillos boiled. Sauces blended and seared, soup seasoned and combined. And nearly all of it takes place in separate vessels, making cleanup a huge chore. The truth is, unless you've got the day off, cooking pozole on a Thursday is nothing more than a sueño imposible.

The first step was to strategize a cooking order so that I could reduce a four-pot recipe down to a single Dutch oven, and that meant toasting pumpkin seeds first. Not every green pozole recipe contains pumpkin seeds, but I love their nutty flavor and the creamy texture they lend to the soup when puréed. They also help to keep the soup smooth and emulsified, which is good news: it means I can skip skimming off excess fat down the line. Pumpkin seeds need to be toasted in a dry pot, so they're the first to go in. I toasted three ounces of seeds until golden brown and fragrant (be careful: they pop as they toast!).

I emptied out the skillet and turned to my meat and vegetables.

The vegetables are straightforward: tart tomatillos as the base, along with chilies (I used a mix of poblano, Anaheim, and jalapeño, though you can use any combination you'd like), and an onion. Choosing a single meat to use as the base of my soup went a long way to reducing its complexity, and since chicken cooks so much faster than pork, I decided to stick with chicken. I tried various cuts before settling on whole legs, which are cheap, cook fast, offer plenty of flavor and body to the soup base, and stay moist and tender even after reheating the soup multiple times. (This is important because for complex recipes, I like to make enough to last for several meals.)

Whether you're making pozole rojo or verde, the basic technique is to make a broth, then separately purée your main flavoring ingredients into a salsa, which you then use to season the soup. My first thought was to skip this step and simply puree everything in the pot together, but without any sautéing or charring of the vegetables beforehand, the soup lacked complexity.

For my next batch, I skimmed off some chicken fat and added it to the Dutch oven. A little stock came along with it, but it quickly evaporated as the fat heated up, leaving behind a layer of concentrated proteins that started browning on the bottom of the pot. Once that layer of proteins was deeply browned and the fat was just starting to smoke, I poured in my puree, followed by the remaining stock.

Pozole is almost as much about the soup base as it is about the garnishes. I like to serve it with diced white onion, diced avocado, diced radishes, thinly sliced hot chilies, and chopped fresh cilantro leaves at the table so that your guests can customize to their hearts' content. (Pro tip: cut the garnishes while that chicken is simmering!) 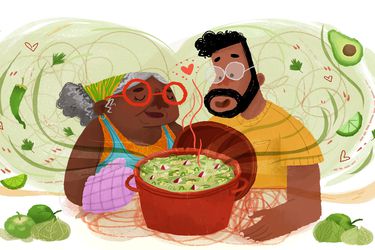 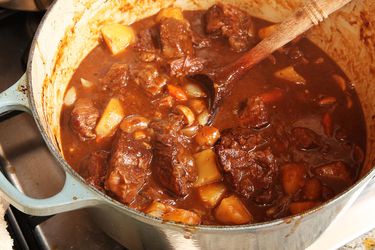 Stew Science: Is It Really Better the Next Day?