Ramen Shack is the most exciting place to eat ramen in the United States, and it will close on March 31.

On March 31, 2019, Keizo Shimamoto's Ramen Shack served its final customer, and the most exciting place to eat ramen in the entire country closed its doors forever.

It was always an unlikely endeavor: a ramen shop with no true home. Before Ramen Shack opened as a "permanent pop-up" at its current location, it had roamed around the city as a pop-up of a more conventional kind, first at the Smorgasburg in Queens in the summer of 2015 and then at other Smorgasburgs and places like Lumpia Shack in the West Village. Fans were obliged to keep track of its wanderings via Instagram and would dutifully make the trek to wherever Shimamoto set up shop, however briefly.

On September 27, 2016, Shimamoto dismantled the wooden booth he'd put together for Smorgasburg, designed to look like a traditional Japanese food stall (called yatai), and put it back together in a slightly different form in the entryway of a commercial kitchen in Queens, across the street from the Queensbridge projects. While it took away the guessing game of where the Shack'd show up, it was still wise to check social media for updates and announcements, since the hours were inconsistent. Initially, it was only open from Tuesday to Friday, from 11 a.m. until 7 p.m., although some days it would shutter at four.

There was always something unreal about the operation, which was reinforced by the combination of its odd hours, its location, and the undeniable quality of the many items on the menu. It seemed either too good to be true or an only-in-New York enigma: Ramen that could comfortably hold its own in Japan served in a space that was the size of a large vestibule. Every time I walked through the door, I wondered if the ramen could possibly be as good as I remembered it. When it inevitably was, I wondered how long the restaurant would last—a few years or 15, it seemed like it could go either way.

It's difficult to describe to someone who's never been, or even someone who's only been a few times, just how extensive the Shack menu is. Even during the early Smorgasburg days, the menu would offer 10 different bowls, with optional additions of a marinated egg or wontons. At its peak, the Shack was offering 17 different daily bowls, along with a special ramen for each weekday, in addition to a "B-side" menu of riffs and experiments, and the menu would change all the time. After going there as frequently as I was able for four years, often ordering two bowls at a time, I still haven't tried all the bowls Shimamoto has made. Even more surprising was that not a single one was ever less than good, and they were very often wildly superlative.

And yet, to call Ramen Shack a restaurant seems a little absurd; even the word "shack" seems inapt for what it is: A makeshift counter that can almost comfortably seat six on stools. At the sole window in the space, right by the entryway, is a ledge and a squat bench, offering four very svelte or three larger customers some additional seating. Over the counter hangs the original Ramen Shack sign from the old yatai, and it's angled down in such a way as if to say, "This is it." Past the sign, it's all kitchen: prep tables, pots, flattops, and sinks, in an area large enough to cater a small wedding.

Six napkin dispensers, several caddies for chopsticks, a few bottles each of vinegar and rayu (spicy chili oil), and a couple shakers of black pepper are the only other amenities, aside from a large tank of complimentary mugicha, or barley tea, from which customers can serve themselves. The walls are decorated with a few press clippings, a calendar, a vintage Japanese ad that's been altered to tout a hamburger, and a laminated timeline of the evolution of tsukemen, or dipping noodles; there's also a strip of stickers, of the kind you'd find on a skateboard, on the door. There’s no bathroom for customers.

I've often thought the Shack has largely flown under the radar of most prestigious food publications and critics because of its location or its decor. To me, at least, what it lacks in other areas is more than made up for by the menu, but I can also see how parts of the Shack's appeal can seem too deep in the weeds of ramen geekery to even professional food writers, even if I believe that the brief era in which Shimamoto ran the shop will prove enormously influential for American ramen.

The shop's influence isn't just a function of the quality of the ramen Shimamoto produces, nor is it merely that the Shack has become a place of pilgrimage for ramen nerds. Rather, it’s because he showed it was possible to produce representative examples of a range of ramen styles, some of which have never appeared in America, like his take on the style of ramen popularized by Shinasoba Tan Tan Tei, an influential Tokyo shop that opened in 1977; it’s because he models the kind of obsessive focus on improvement that every ramen shop should aspire to have; finally, it’s because he makes his own noodles.

Shimamoto's shoyu ramen is a perfect example of all three of these reasons. I can still remember how novel it was to find a pitch-perfect chintan shoyu sold from a rickety stall at a Smorgasburg in 2015. At the time, there was no other bowl in the city like it, and one of the elements that stood out most to me was how well the menma, or fermented seasoned bamboo shoots, had been prepared. The noodles, flat and perhaps half the width of tagliatelle, were perfectly suited to the broth, made chewier by a technique known as "temomi," which translates badly into "hand-rolled" but means, essentially, scrunching the hell out of the noodles by any means possible.

What's most remarkable about that bowl of ramen is how it has changed. Whereas the original bowl's greatest virtues were its simplicity and the synergy of its components, the shoyu ramen on the menu today is defined by an understated complexity. The chicken and dashi broth blend has just enough body from extracted gelatin to give it a pleasing texture, but not so much that it interferes with the clear marine notes provided by kombu and smoky katsuobushi; the soy sauce tare, or seasoning, is rich with more dried fish notes, and a hint of earthiness from dried shiitake; the ample amount of chicken fat on top is offset by a subtle hint of yuzu. And those old, flat noodles, which at the time Shimamoto was buying from a noodle manufacturer, have been replaced by thin noodles that are both slippery and light, which he makes himself at his noodle company, Shimamoto Noodle.

Every one of the options on the Shack's menu has undergone a similar evolution, and I’d argue the reason it's so exciting to return to the Shack isn't just to try whatever new thing Shimamoto has added, but to discover how he’s tweaked old favorites, almost always for the better. But it’s the noodles that truly set the Shack apart from all other ramen shops in the US. It’s not just their quality, which is very good; it’s the variety that Shimamoto appears to be compelled to produce, going so far as to make a specific noodle to go along with bowls of ramen he'll feature on the menu maybe once a week, at most. Contrast that with the heavy reliance of ramen shops across the country on Sun Noodles; even though Sun Noodles makes a great product and will tailor noodle recipes specifically for some lucky shops, its dominance has inevitably led to a kind of flatness of character in the ramen scene.

Of course, the menu has also always included the Ramen Burger, which is both Shimamoto's boon and his curse (you can also find our ramen burger recipe here). The viral sensation made his name in the US and allowed him to establish his business. In fact, the primary purpose of the kitchen the Shack sits in is to prepare stuff for Ramen Burger stalls at weekend Smorgasburgs. But even though Shimamoto is rightly proud of producing something people love to eat, the burger's fame has always risked occluding his true skill as a ramen-making savant with seemingly perfect taste-memory.

Shimamoto describes his menu as "ramen-inspired ramen," by which he means everything he offers is a tribute, in one way or another, to the thousands and thousands of bowls of ramen he has eaten over the course of his life, many of which he documented on his Go Ramen blog from 2007 until 2013. And this urge—some might call it a compulsion—to recreate and slightly alter some of the best bowls he's eaten in Japan in his burger kitchen, and offer them all, is what makes the menu-as-mixtape metaphor alluded to by the “B-side” reference so appropriate. Every bowl is both a boast and an acknowledgment of some debt, like demonstrations of superior syntactic skill layered over iconic samples.

In the end, Shimamoto’s irrepressible need to produce a crazy variety of good ramen points to one of the most appealing aspects of the entire Ramen Shack project and underscores why it’s so sad for his fans that in a few days it will all be over. Watching him work to constantly improve the ramen he’s served over the last four years was to experience the thrill of watching a person doing what they were meant for, even in the face of numerous obstacles and long odds. It was the joy of seeing a job well done being done so wildly well.

Ramen Shack was both an inspiration and an education, and it will be sorely missed. 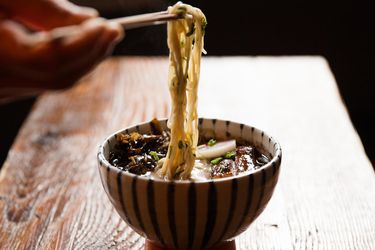