I love almost everything about Jell-O: the fact that it's just a little bit sticky and that I can smush it against the roof of my mouth. I love that I can poke it and it will jiggle for a surprisingly long time. I especially love watching it bounce in slow motion, which is indeed strangely mesmerizing.

What I don't love so much is how it can taste like gelatinous Kool-Aid.

Fortunately, I have many other ways to enjoy those wobbly, melt-in-your-mouth textures, with far more interesting flavors to boot. For starters: Beef tendon. Mung bean jelly. Bubble tea. Mochi. The only thing I can't figure out is why these quivering, wiggling foods have such a poor reputation.

For a culture that so readily embraces the sweet side of gelatin (witness), we're awfully wary when it comes to dipping our toes in jellied waters. But if you've ever indulged in a fruit-studded, Cool Whip-topped Jell-O dessert, or you pride yourself on eating well, it's time to stand up and embrace the wobble. Here are some of my favorite jellied foods.

I avoided beef tendon for years because I thought it would be stringy, chewy, and maybe even a little crunchy. And since it's essentially cartilage, it probably would be...if you ate it raw or quickly seared. But slow-cooked tendon, braised or steamed for hours and hours until it's tender, slightly translucent, and decidedly jiggly, is something else entirely. You can thank the tendon's high volume of collagen for that texture: Collagen is the protein found in the connective tissue of animals and fish that, when heated under the proper conditions, converts to gelatin.

I like to think of gelatin as your typical comic book superhero—walking around all average-Jane until called upon in a moment of need. Then, it's off to the telephone booth and blamo: you've got an ass-kicking force of nature that's ready to dominate. It's what makes soup dumplings possible, gives stocks and sauces body, and adds moisture to these meatballs.

So when I tell you that tendon's flavor is deeply beefy and rich, with a spoon-tender texture akin to a delicious piece of fat hanging off the side of a steak or a slab of pork belly, it's because of that cartilage, not in spite of it.

You can find delightfully succulent chunks of tendon floating in Vietnamese pho and Chinese noodle soups, or even thin-sliced into salads, but my favorite preparation is Chinese braised tendon and brisket. The tendon and brisket are slow-cooked together in a mixture of water, soy sauce, cooking wine, oyster sauce, and aromatics for a savory-sweet, sticky-rich bowl of some seriously hearty comfort food.

Aspic is basically a homemade jello by another name—combine liquid and gelatin over heat, let it cool and voilà! You have your very own gelée (basically another name for aspic). Technically speaking, true aspic is a gelatin-rich stock—that means you've added enough collagen-rich ingredients like beef tendon or chicken feet to your water and aromatics for the mixture to cool into a gel. It looks something like this:

That said, you can get similar results by adding powdered or sheet gelatin to a water-based liquid of your choosing: anything from juice to canned stock to soup will do. You'll just have to follow package instructions to make sure your liquid is sufficiently heated to form an emulsion.

Practically speaking, aspic functions as a way to preserve the shelf-life of an ingredient, by sealing it off from the elements (namely bacteria). Hence the OG of Jello Salads: the elaborate molded platters of encased meats and fruits presented to 18th century European royalty. So while we don't tend to store our pâtés in the unrefrigerated pantries of austere French chateaux, it's safe to say that you're a-okay to dig into that aspic instead of scraping it off to the side.

In fact, you most definitely should: it can add moisture and a juicy quality to your food, especially when it's been intentionally flavored to complement the ingredients its served with—take this bourbon-spiked chicken liver mousse with cranberry gelée, for instance.

The world of jellied foods extends far beyond gelatin-based delicacies—starches and flours from grains, beans, and tubers are commonly used as thickening agents; combined with water, they can be used to create gelled textures without any animal proteins at all.

Case in point (and a personal favorite): mung bean jelly. My first encounter with mung bean jelly was Tibetan laping, a popular street food snack of chilled noodle-like strips. Their mild flavor makes them a perfect vessel for a punchy, invigorating sauce of vinegar, soy sauce, garlic, and chili oil. Similar renditions are popular in China (liangfen) and Korea (nokdumuk), and often topped with crunchy garnishes like sesame seeds and thinly sliced vegetables. Across the board, this is a dish that celebrates contrasts, at once smooth and crisp, cooling and spicy.

Tapioca pearls are Dippin Dots' way more fun, versatile cousin. There's also the delightful element of watching them transform from hard little pellets into translucent little balls of gel. Smooth, chewy, and slightly gummy, there's something inherently fun and tactile about tapioca pearls. But what the hell are they?

Tapioca is a starch derived from manioc root (also known as cassava). According to Harold McGee's On Food and Cooking, tapioca "tends to form unpleasantly stringy associations in water and so is usually made into large pregelatinized pearls...which are then cooked only long enough to be softened." Simmered with coconut milk or cream, they yield their namesake pudding, which is studded with and thickened by the translucent balls. Their boba counterpart, which you find clustered in the bottom of your bubble tea, are prepared similarly—simmered in water and often subsequently soaked in simple syrup for sweetness—before they're added to your iced tea of choice. I can't deny the joy of running them around the inside of my mouth before savoring that chewy, candy-like texture.

Glutinous rice, more commonly known as sticky rice, is another popular gelling ingredient. and it's responsible for one of my favorite desserts of all time: mochi.

These Japanese sweets with red bean, black sesame, or (my favorite) ice cream fillings wrapped in a skin of chewy, springy rice flour dough, owe their wobbly nature to amylopectin, a water-soluble component of starch. Glutinous rice is loaded with the stuff, and when released into liquids, amylopectin adds creamy heft to dishes like risotto and brings the essential springiness to mochi dough.

Mochi highlight everything I love about these jelly-like delights: an incredible range of texture. Their cores are dense and creamy; the skins like a more substantial and chewy jello; even the fine dusting of starch on their surface, to keep them separate, adds a little something. If they can't convince you to embrace the wobble, you're on your own. 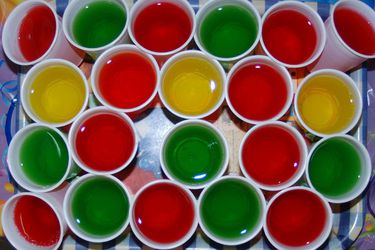 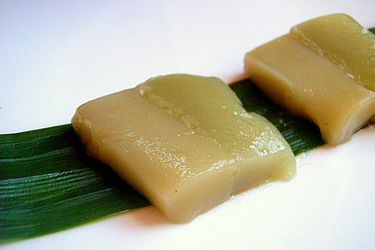 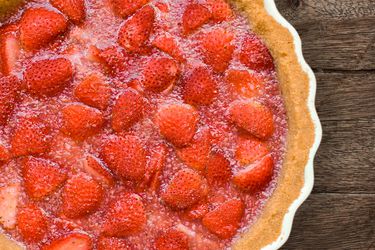