You know that commercial that makes fun of the idea that "they can't put anything on the Internet if it's not true"? Well, sometimes you have to rely on the Internet when you're looking to do something that's a little outside the...uh...pot. Like pressure frying at home.

I asked the manufacturer if the pressure cookers could be used to fry chicken. "It's not recommended," I was told. The units aren't tested for pressure frying, they aren't sold as pressure fryers, and if you blow yourself up, the manufacturer won't be responsible. It will void the warranty. But people do it anyway.

So, I decided to take the risk for you and tested the Magefesa Star 10-Quart Pressure Cooker ($179.99) as a pressure fryer.

But first, I pressure-cooked a brisket, just to get some use out of the pot in case my second experiment resulted in mass kitchen destruction.

This particular pressure cooker has a pressure-release vent with a weight on top of it that spins when the pressure has been achieved. A valve pops up to release pressure if the first vent gets clogged or you somehow manage to build more pressure than can be released via the vent. If that valve pops, it's time to turn off the heat.

If both of those vents clog, you're on your way to the danger zone. Many pressure cookers have lids that twist on and lock in place. Instead, this one has a large clamp device across the top that holds the lid down. It looks a little low-tech, but that clamp is actually the third safety release. If pressure builds, that metal clamp will bend, the lid will begin to lift, and pressure will vent from under the lid. That will damage the clamp so you'd need a new one, but at least the lid shouldn't go flying across the room, and the release of pressure should be somewhat controlled as the lid raises slowly. (You'd probably still end up with an ugly mess, though.)

First precaution: make sure the release valve is clear, and test the pop-up valve to make sure it's not stuck or blocked. Then, cook the food so that the happy spinny vent weight is spinning at a reasonable pace. And if the pressure stops venting but the heat is still on, turn off the stove and wait for everything to cool off.

The manufacturer doesn't recommend pressure frying, and I'm not going to tell you it's safe, either. But if you're looking for a super-safe pressure cooker, this could be the model for you. 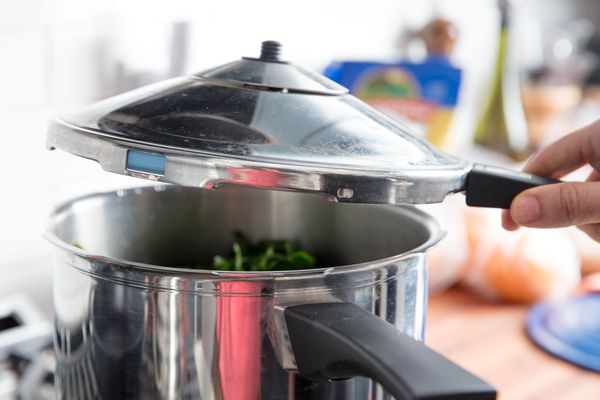