I've always been a fool for "fruity" cereals. No, silly, I'm not talking about strawberries or bananas on top. I'm talking about the dazzling sight and heady scent of sugar crusted pinks and blues, swirling the milk to an unnatural neon shade. It makes up an especially strong arm of the trifecta of sugary cereal glory: chocolate, marshmallows, and "fruity". Basically the qualities that made a cereal banned from the Palermo household growing up. Granted my mom had a prejudice against all manner of frosted and glazed cereals as well, but any cereal containing one of the Big 3 was expressly forbidden.

My love for fruity cereals spans from Trix to Loops to Cheerios, but there's something about Fruity Pebbles that stands above the rest. Even when I'm chatting in non-cereal circles (as an alien in a foreign land), the mention of them gets people talking. It seems as though most have had a moment in some point of their life, usually as a kid (LUCKY) or a college student, where they fell prey to the charms of the Pebbles.

The first thing to note about this cereal is its rainbow of colors; a beautiful variety, none of which are found nature. As general lover all of things bright, colorful and sparkly, these vibrant hues make the cereal all that more appealing to me. I mean there's pink in here for goodness sake!

Then, there's the texture. There's no denying that you can actually hear your teeth crying out for mercy after a dry handful of the Pebbles. I'm not saying that it's stopping me, but it's worth noting. There's some serious sugar crust on these little guys, and while on the dry cereal it's a little much, once milk enters the mix, the magic really begins.

The crackly, crunchy, sugary, crusty, pebbles soften ever so slightly, and for a few exquisite moments all the textures work perfectly. Carey pointed out that Fruity Pebbles have a delicious but extremely short milk/bowl-life. Best eaten in small quantities at a time. Or a large bowl, inhaled in 1-2 minutes, as is my personal method.

Let's be honest: this is candy, in a cereal box. I could try to talk about how there's some sort of grainy aftertaste the makes it more respectable than Froot Loops or even Fruity Cheerios, but I'd really be stretching it. Fruity Pebbles is funfetti of cereals, as Max wisely pointed out. And the flavor? I wouldn't do it justice if I tried. It's just, well, "fruity". You know what I mean.

Fruity cereals like Pebbles aren't for everyone, but I'm guessing if you love rainbow sprinkles and gummy candies, you are in the club.

Oh! Also, according to the box there is something called Cupcake Pebbles and Marshmallow Pebbles! Has anyone had these? I feel oddly out of the loop. Going to need to get my hands on these.

Any Fruity Pebbles die-hards out there? What's your favorite "fruity" cereal? 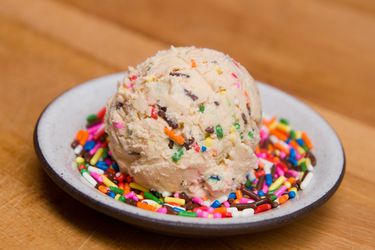