Coming from a Jewish family of Eastern European descent, I'm pretty sure pierogi were my first experience in dumplings (though it could have easily been pork and cabbage dumplings from suburban Chinese restaurants). These little pouches of dough, traditionally filled with potatoes, cheese, and/or sauerkraut, are of Slovak origin and have spread eastward through the region over the centuries. These days, there's a long list of countries that have variations of pierogi they call their own, including Poland, Russia, Germany, Latvia, the Ukraine, Slovakia, and Hungary.

To be totally truthful, I wasn't much of a pierogi eater in my youth. It wasn't until I moved to New York and experienced my first fried pierogi that a love affair was ignited. What I'd previously thought of as a somewhat dull and lifeless dumpling (a result of too many a bland potato pierogi in my youth) was turned completely around as I found one flavorful version after another—woodsy mushroom with tangy sauerkraut, creamy sweet potato, fresh spinach and cheese—all of them delivered in a blistered, slightly crisp shell.

Of all the pierogi that New York has offered up to me over the years, it's the sweet cheese version that has really stolen my heart. It's tangy, creamy, sweet, and cheesy, straddling a line between savory and sweet, making it perfect to eat no matter the occasion.

There's no two ways about it: making dumplings is a finicky business. I'm not a patient man, and manufacturing anything in miniature and en mass has some foreseeable results: frustration, obscenities, and my wife hiding out in the bedroom until the kitchen suffering blows over. Knowing this inevitability, I've been working hard on coming up with a homemade version that's really worth the effort. I finally got there.

The easiest bit is the cheese filling, so I decided to focus on that first.

The cheese filling should be a little a tart and a little creamy with a distinct curd, so I picked up the two cheeses I thought would best fit that bill—Farmer's cheese and cottage cheese. The cottage cheese proved much too watery—it required the extra step of having to drain it before it was even possible to form it into a filling that stayed in place as you formed the pierogi.

Farmer's cheese, which starts out drier, was the way to go. I nailed the flavor by adding sugar until it hit the right sweetness, then mixing in an egg so it would bind well when cooked. Three simple ingredients and one simple whisking technique is all it takes for the filling. On to the more difficult part: the dough.

The Tale of Two Doughs

The simplest pierogi doughs are nothing more than flour and water kneaded together until they can be rolled out, but this produces pierogi that are dense and chewy—better for boiling. For my fried pierogi, I wanted a lighter dough that puffs and blisters a bit as it fries. How do I get there?

I knew I'd need to add some fat to tenderize the dough, as well as some egg to help lighten and leaven it, so I decided to try a couple recipes that fit that bill.

The first was a combination of made with flour, water, an egg, and a little oil. The second was a recipe that used sour cream in place of much of the water, along with some butter cut into the flour, sort of like a pie crust.

Both doughs were quick to put together in the food processor, and only needed about a minute of kneading to become smooth and cohesive. After about thirty minutes of rest (in order to allow gluten to relax, making them easier to roll), I rolled both doughs out into sheets about 1/16 of an inch thick.

From there I cut out rounds using a 3 1/4-inch biscuit cutter, plopped a heaping teaspoon of the chilled cheese filling in the center, and began assembling. This is where premonition became reality; the tediousness of the task, on top of some cheesy explosions, resulted in a few expletives here and there as I worked through sealing all those pierogi—a process that required brushing the exposed edges of the rounds with water, folding it over to make a half moon, and crimping the dough closed with the tines of a fork.

In my head, it took forever, but in reality I was able to complete what can only described as an ass-load of pierogi in just about an hour, laying them out on a parchment-lined baking sheet as I worked on them. Not too shabby.

The Boil and Fry

In order for fried pierogi to properly cook through and puff, they need to undergo a two-stage cooking process. The first is a brief boil in salted water, just until they're cooked through—about five minutes.

Next, as the pierogi drain in a colander, you dump the water, dry the pot, and replace it with oil, which gets heated to 375°F. In go the pierogi in small batches (so as not to drop the temperature of the oil to much). Any lingering resentment I had toward this project faded as the first batch fried up, golden and blistery. It's a look that instantly brings a smile to my face and rumble to my stomach.

So what were the results? Both doughs looked great. The first, more traditional dough with oil and egg was denser with a slight chew, and eaten on its own tasted more or less "right" for a pierogi. But one bite into that sour cream dough and it instantly stole the show with its lighter, crisper, more tender texture.

It was totally what you want a delicious fried bite to be—light, airy, with a nice crispness. That improvement in texture made the wrapper less of a distracting component and let the sweet cheese become even more of a star.

Yes, making pierogi from scratch is a bit of pain. And yes, it takes a couple hours start to finish. But in the end, I can say without hesitation that it's worth it. The best part? They can be frozen for later use, so now I can sit back and take comfort in the fact that my freezer has a big bag of my favorite pierogi sitting in it, just waiting to be boiled and fried and served with sour cream, applesauce, and caramelized onions. It's nice to know I can have just a bit of joy whenever I need it. 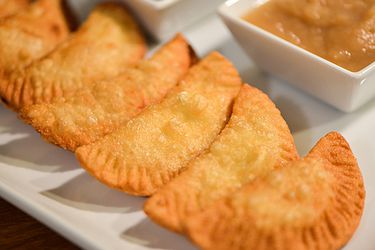 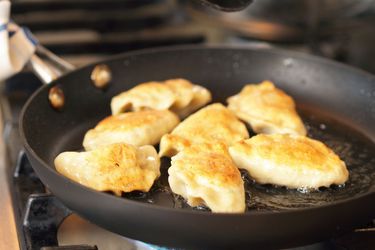