Once upon a time, when I was in the mood for something fried—I mean truly fried, golden and lightly greasy to the touch and audibly crunchy—I left it to the experts. I love a crispy French fry or cheesy jalapeño popper at least as much as the next person, but deep-frying can be an intimidating cooking method, requiring a certain level of fearlessness around something as volatile as a pot of hot oil.

But my attitude changed completely when I bought a wok and decided to give deep-frying an honest try. A wok doesn't make the process foolproof, but it is our favorite tool for the job. Once you've got the equipment, it's all a matter of practicing good technique: controlling the heat, draining properly, and cleaning the oil when you're done. The reward is a whole world of culinary possibilities, from crispy-outside, tender-inside Buffalo wings to moist and light falafel, meaty fried chicken sandwiches (made with just five ingredients) to fried artichokes brightened up with a squeeze of lemon. Here are 20 delicious recipes to get you started on satisfying all your cravings for fried treats, from the comfort of your own kitchen.

For especially crispy and crackly chicken wings, we recommend frying them twice, once at 250°F and again at 400°F. The first fry is technically a confit, which tenderizes the meat; the second dip in hotter oil leaves the chicken shatteringly crisp, without any sort of batter or coating at all. Slather the wings in a tangy, vinegary Buffalo sauce for the best game-day snack in town.

Get the recipe for The Best Buffalo Wings »

This is no sad substitute for chicken wings, but a fully vegan, crunchy and golden alternative that's enticingly good in its own right. Here, we batter the cauliflower florets (cut them smaller so they'll turn out crispier) with ingredients borrowed from our Korean fried chicken recipe: cornstarch, flour, water, and vodka, the last of which helps to limit gluten formation.

Get the recipe for Crispy Buffalo Fried Cauliflower »

Making your own deep-fried jalapeño poppers is a risky undertaking—too many recipes you'll find online call for cheeses like cheddar or Jack, which tend to release steam and blow out of the peppers in the hot oil, or for stuffing whole jalapeños, which aren't exactly optimal for popping in your mouth. Instead, we use cream cheese for the filling, seasoned with a flavorful mix of ground cumin, garlic powder, onion powder, and lime juice. And, to avoid having to jam half a jalapeño in your mouth at once, we cut the whole peppers into one-inch rings.

Get the recipe for Crispy Deep-Fried Jalapeño Poppers »

Admittedly, poutine is meant to be one of those gloriously messy foods—and, for some of us, the experience just isn't the same if your hands don't end up covered in gravy. But if you want all the savory flavors of cheese curds, meaty gravy, and French fries without the prolonged cleanup, you'll want to try these outrageous, bite-size poutine poppers. Essentially cheesy Tater Tots, they're made by wrapping the curds in mashed potato flesh and frying them up into golden orbs. For tidier eating, rather than pouring the gravy on top, serve it on the side for dipping.

While we often equate deep-frying with pure junk food, these crunchy and salty fried artichokes, one of the best-known foods left to us by the historical Jewish population of Rome, are sophisticated enough to serve at a fancy cocktail party. Like our confit Buffalo wings, they're fried twice—once to tenderize them, and again to crisp them up. Frying in olive oil gives them a more intense and fully Mediterranean flavor that we love, but you can also use canola for a cleaner artichoke flavor.

Get the recipe for Roman-Jewish Fried Artichokes (Carciofi alla Giudia) »

The best falafel is moist, light, and crispy—never dry or pasty—with a fluffy, almost crumbly interior. Start by grinding dried chickpeas yourself in a food processor, which eliminates the need for binders like flour that can weigh the falafel down, and make the balls fairly small in order to maximize their ratio of surface area to volume (and, therefore, their crunch). Fresh herbs, like cilantro, mint, and parsley, plus spices like cumin and coriander, give these falafel a heady aroma; for a spicy, punchy twist, try our falafel with black olives and harissa, too.

Of all the ways in which restaurant onion rings can and do go wrong, the most unforgivable is when the onion isn't tender enough to bite through cleanly, which inevitably leaves you drawing it out of the shell in one long strand. The key to avoiding this is cryo-blanching the onion before frying—a stint in the freezer of at least one hour breaks down the onion, making it softer and easier to cut. Our batter includes both light beer and vodka, for a coating that's both crisp and flavorful.

Get the recipe for The Food Lab's Foolproof Onion Rings »

Spare me your bistros and your brewpubs: Some of the best French fries in the world come from McDonald's. To replicate the Golden Arches' famously thin and crisp fries, boil the cut potato sticks in water spiked with vinegar, which helps keep the potatoes from disintegrating. Then fry them once briefly in very hot oil, cryo-blanch by freezing them, and fry again until they're golden brown when you're ready to serve.

Get the recipe for Perfect Thin and Crispy French Fries »

Get ready to throw all thought of health and moderation out the window, because this recipe has no time for that. It's a great, if completely over-the-top, way to use up leftover pulled pork and macaroni and cheese: We form wedges out of the mac and cheese and pork, plus jalapeños and extra cheese, then coat them with a sweet cornbread batter and deep-fry. Garnish with sliced jalapeños and serve with barbecue sauce for dipping.

These little bites of insanity are like a cross between Caprese salad and fried mozzarella sticks: We hollow out golf-ball-sized tomatoes and stuff them with small ciliegine of fresh mozzarella. After they're coated with seasoned bread crumbs, they're ready to be deep-fried until golden outside and gooey inside. Double-dipping the Caprese bombs in egg and flour before breading helps ensure that the crumbs adhere.

Get the recipe for Fried Caprese Bombs »

Fried shrimp heads are something of an acquired taste, but those of us who love them know the joys to be found in their rich-tasting innards. If you're making them at home, of course, you may as well fry the shrimp whole. In this Cantonese recipe, we coat them with egg and cornstarch, fry them, and toss them with minced garlic, green onions, and red chili pepper flakes for a crispy, finger-licking-good snack.

The most essential part of good fried chicken is a great crust. A few tablespoons of spicy buttermilk marinade in our flour and cornstarch mixture help it clump and form an extra-craggy, textured crust with lots of crispy nubs. That same buttermilk marinade leaves the meat moist, tender, and flavorful. To make sure that the crust doesn't burn before the chicken is done, we fry the pieces first until they're browned, then finish in the oven to cook the meat through.

Get the recipe for The Best Buttermilk-Brined Southern Fried Chicken »

On those occasions when your desire for fried chicken must be sated, but you don't have the energy to face a mile-long ingredient list, these juicy fried chicken sandwiches are a lifesaver. Brining the chicken thighs in pickle juice seasons the meat while helping to break down its muscle structure, allowing it to stay moist. Add a simple coating of buttermilk and self-rising flour, fry, and jam it into a buttery bun with pickles for an immensely satisfying sandwich.

Get the recipe for 5-Ingredient Fried Chicken Sandwiches »

Thin and quick-cooking, chicken breasts pounded into cutlets make a surprisingly easy weeknight dinner. They require no brining, which means the whole dish can be prepared in less than half an hour. The secret to this recipe: frying in clarified butter, which gives the meat a richer, nuttier flavor than vegetable oil. A little Parmesan added to the panko breading provides another flavor boost.

Get the recipe for Easy Breaded Fried Chicken Cutlets »

For fried chicken nuggets that stay crispy—even after they're tossed with a sweet General Tso's sauce—this recipe combines the vodka-and-cornstarch slurry from our Korean fried chicken with the craggy batter of our Southern fried chicken. The same technique can be used just as effectively for making Chinese takeout–style orange or sesame chicken, too.

Get the recipe for The Best General Tso's Chicken »

When it's overcooked and tough, cloaked in a greasy crust, chicken-fried steak is nothing to write home about. But when it's done well, it's juicy and rich with beef flavor, with a crispy shell that doesn't become soggy even when covered in peppery gravy. We start with sirloin tip and pound it thin before applying a coating of cornstarch and flour. Though shallow-frying is more convenient, a full-on deep-fry is necessary for good, even browning.

Get the recipe for Tender and Beefy Chicken-Fried Steak »

Filipinos know their way around a piece of pork, and few dishes demonstrate that as well as lechon kawali, or crispy fried pork belly. The pork is first simmered until tender in a broth seasoned with garlic, bay leaves, peppercorns, and soy sauce, before being fried until intensely crisp outside. To get the skin bubbly, allow the pork to air-dry overnight in the fridge between the simmering and frying steps.

One of the best parts of visiting my family in Arizona is having the opportunity to eat Sonoran hot dogs. The classic Sonoran dog is wrapped in bacon, deep-fried, and stuffed into big, soft Mexican rolls with tons of toppings, including beans, tomatoes, onions, and mayonnaise. Our recipe keeps the dogs bacon-wrapped and deep-fried, but scales the toppings back so they fit on a standard hot dog bun. Crushed potato chips, though, are a must for the extra crunch they provide.

Get the recipe for Bacon-Wrapped Hot Dogs With Avocado, Tomato, Onion, and Potato Chips »

As good as they are raw, slices of ripe avocado become incredibly delicious when coated in a light cornstarch-and-beer batter and fried—crisp outside and creamy inside. Combined with salsa verde, chipotle mayo, sliced chilies, and quick-pickled red onion, they're the perfect filling for vegetarian tacos. Be sure to have all the fixings ready before you fry the avocado slices, which are at their best right after coming out of the oil.

Get the recipe for Fried-Avocado Tacos With Chipotle Cream, Cabbage, and Pickled Red Onions »

Jalea is a typical Peruvian dish that consists of golden chunks of deep-fried mixed seafood topped with salsa criolla, a refreshing, mildly spicy salad of onion, tomato, and cilantro dressed in lime juice. Use any kind of fish you like, though a combination of shrimp, squid, and some sort of firm white-fleshed fish is traditional. We recommend serving this with fried yuca and an ice-cold beer. 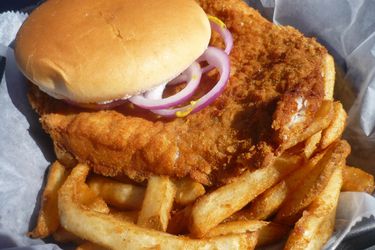 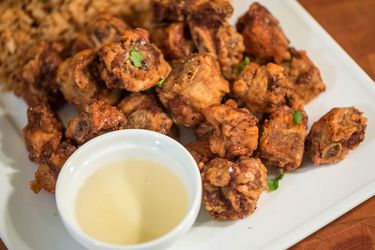