This supremely rich vegetarian side dish proves steaks and chops aren't the only things worth cooking in brown butter.

Almost every Christmas, my fiancée and future in-laws travel to France for a week to visit family friends, eat some good food, and exchange New York's "I'm walkin' here!" charm for Parisian eye-rolls and ennui. This past December, I got to tag along for the first time.

My last visit to the City of Lights had been in the summer of 1998, right after Les Bleus won their first World Cup. Over the past two decades, I've tried to stay in peak croissant- and foie gras–eating condition, but it's not easy when you're not in the thick of it. I was excited to get back to the big leagues.

I spent the weeks leading up to the trip putting together a dining itinerary that my fiancée described as "aggressive." I prefer to call my plan to fit in as many meals as possible "enthusiastic." Between boulangerie runs, neo-bistro prix-fixe lunches, wine-bar cheese snacks, and a couple tasting-menu dinners, we ate a lot. Someone has to make sure restaurants and charcuterie shops stay in business during the Whole30 time of year, right?

One of the best things I ate, though, didn't come out of a professional kitchen or cheese case. It was a simple side dish prepared and served by the family friends who hosted us—impossibly small new potatoes cooked in brown butter, sprinkled with sea salt, and served with a dollop of crème fraîche.

Before I go any further, I'd like to say that I am always skeptical of travel pieces that romanticize some home-cooked meal the writer was served by a kind old nonna who took them in and taught them how to make tortellini. I promise this isn't that kind of deal; these potatoes are just ridiculously tasty.

I couldn't stop eating them. Despite being bathed in brown butter, they weren't greasy and didn't induce an instant food coma, like Robuchon-style pomme purée—another French potato-and-butter concoction. I wouldn't go so far as to agree with the Parisians at the table who kept saying that this was a très léger (very light) meal—especially not after a whole wheel of Vacherin was brought out for pre-dessert—but I guess everything is relative.

As with my favorite kind of roasted potatoes, these "light" ones were overcooked in just the right way and had that same creamy softness when you bit through their crinkly, butter-coated skins, complemented by the crunch of fleur de sel.

I began quizzing our host for her recipe while we were still at the dinner table. She was happy to give me the main plot points of the process, but she didn't whisk me away to the kitchen to give me that travel-writing anecdotal moment.

She explained that the potatoes were cooked from raw entirely in demi-sel (lightly salted) butter, uncovered, and on the stovetop. While the dish is simple, she warned me—in that impossibly French, I-just-woke-up-this-way manner—that many of her friends had tried to re-create these potatoes and failed. Paris is definitely the birthplace of the humblebrag.

Quality of ingredients is the biggest challenge in re-creating simple dishes like this one back here in the States. Sourcing high-quality produce, meats, and staple ingredients has become a lot easier here over the past few years, but it's just a different ball game compared with shopping in France. When I began working on this recipe, I wanted to see how much the quality of ingredients mattered, so I tested potatoes cooked with different types of butter and salt.

Most butter here in the States has a fat content of 80%; in France, on the other hand, butter must have a minimum fat content of 82%. (Some American dairy companies make butter with a higher fat content and label it "European-style.")

European-style butter is almost always more expensive. As Stella would tell you, these two can't just be swapped out for one another in baking, and, after testing with both styles for these potatoes, I would say the same applies here.

Whichever type of butter you use, I recommend going with unsalted. I tested this with a few different kinds of salted and semi-salted butter, but it's much harder to control the salinity level in the dish when you're using butter that is already seasoned. You're better off seasoning with salt yourself.

I like using a slightly coarse sea salt like fleur de sel, which is fine enough to meld with the butter while the potatoes are cooking, but also has enough texture to provide crunch as a finishing salt. If you don't have sea salt around, kosher salt will work.

As for the potatoes, use the smallest new potatoes you can find. You're looking for uniform, bite-size spuds. If they are all over the board in terms of size, it's trickier to make sure they all cook at the same rate.

I like infusing the butter with standard aromatics, like thyme sprigs and a couple of garlic cloves, but that's totally optional. Other than that, all you'll need are chives for garnishing and a little crème fraîche for dipping. Essentially, these are classic American baked potatoes that did a semester abroad in Paris. Fortunately, they won't drone on about their favorite arrondissement, and you get to eat them.

The cooking process itself is incredibly simple. I start by melting a stick of butter (very light, remember?) over medium heat in a saucepan. Rather than letting the butter brown first, I immediately add the potatoes. They need to cook, and the butter will have plenty of time to brown.

As the butter begins to sputter and foam, I swirl and stir the potatoes, making sure they are arranged in a single layer in the pan for even cooking. Once the butter turns golden brown, I turn the heat down so that the milk solids in the butter don't scorch, and I add the aromatics to the pan. This is butter-basted steak for vegetarians.

The butter just needs to be gently bubbling. From there, it's about going low and slow, gently cooking the potatoes and turning them occasionally, so that they cook and brown evenly on all sides. While the potatoes cook, you're free to work on the rest of your meal. This would be a great dish to pair with a steak or a seared piece of fish, as you can use the brown butter as a sauce for your protein as well as the potatoes. Just balance everything out with a bright salad.

Once the potatoes are completely tender (they should offer no resistance when you test them with a paring knife), take them off the heat, but keep them in the saucepan. I found that if I pulled the potatoes right out of the butter when they were tender, they hardened up at the center. Allowing them to cool in the brown butter kept them soft all the way through.

Once they've cooled slightly, I use a slotted spoon to transfer them over to a serving bowl. This way, you can divvy up the brown butter as you wish. Use it as a sauce for your main course (feel free to brighten it up with fresh lemon juice), or just pour it all over the potatoes before sprinkling them with sea salt and chives. This is léger fare, after all.

Look for potatoes that are about 1 to 1 1/2 inches in diameter. If you can only find larger ones, you will need to adjust the cooking time accordingly.

This recipe yields enough brown butter to sauce a main-course protein as well as the potatoes themselves.

The potatoes are best enjoyed immediately, but they can be stored in an airtight container with the brown butter and refrigerated for up to three days. Reheat gently before serving. 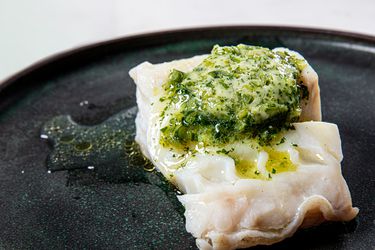 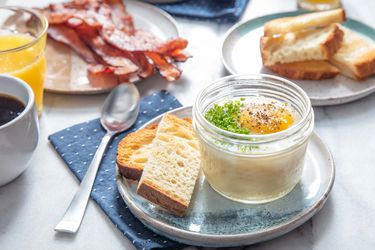 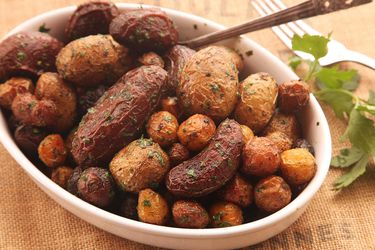 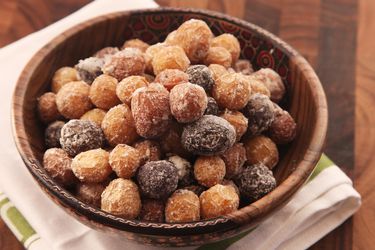