It took a few months, but I finally tried the frozen French macarons from Trader Joe's that some of you recommended to me back in December when I reviewed the limited time-only macarons from Starbucks. I wish I had tried them sooner: they are way better than the Starbucks macarons, and at $4.99 for a dozen pieces, way cheaper.

"Just don't leave them in a warm spot for too long or they'll get too soft."

Leave the box out to defrost for half an hour and the macarons are good to go. The vanilla macaron filling had a pleasant vanilla flavor (you might get a whiff of alcohol from the vanilla extract, though) and were just a touch sweeter than I prefer. The cookies were soft, just moist enough, not too airy, and had a thin crust around the outside. There was an adequate amount of filling and the filling's texture—custardy and smooth—melded well with that of the cookies. Just don't leave them in a warm spot for too long or they'll get too soft.

The chocolate macarons were better. I've found that chocolate fares the best in any group of macarons compared to other flavors since it's hard to mess up the chocolate flavor of the cookies or the chocolate ganache filling. They were nicely balanced like the vanilla macarons, except a bit less sweet, and the filling was stiffer.

For only $4.99 a box, I'd definitely buy these again. They're a great size for snacking and only 45 calories per cookie (not that a higher calorie count would stop me). The only problem is that the availability varies by store.

Ingredients, if you're curious:

UPDATE: I added this comment on March 26, but am copying it up here to clarify a few things:

These macarons are $0.42 cents a piece—they are not along the same lines as Paris-based patisseries Ladurée or Pierre Hermé, which probably cost about four times as much (and they're worth the price). I didn't mean to portray Trader Joe's macarons as a replacement for the best macarons money can buy—I think they're a good version for the price and availability. I've eaten plenty of macarons in NYC that were 3 times the price and tasted worse. If you're lucky enough to be able to buy good macarons or make them yourself, then by all means, you should do that. 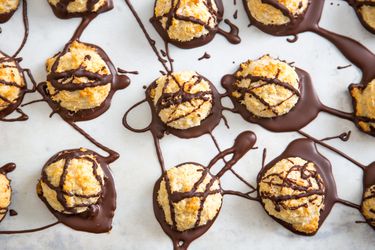 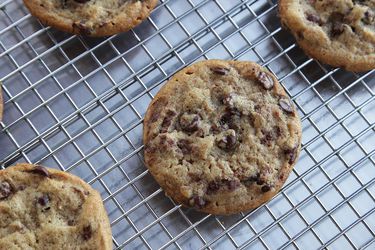