Growing up in a French-American family, Thanksgiving was always a happy confusion. Apple cider sorbet with our pumpkin pie. Gratin Dauphinois instead of mashed potatoes. Haricots verts instead of regular, sturdy green beans. And we always, whether it's considered French or not, start the night with a champagne toast and a list of what we are each thankful for.

I've always been thankful for the transatlantic jumble that is that meal. Part of what makes Thanksgiving American is that we come from so many different places to be together with the same ideals, so it's appropriate that we all sit down to some version of turkey and potatoes and pie. But the turkey's accent is decidedly different across the households that, stitched together, form our country.

I have to admit, usually it's our side dishes that are francophone—our turkey is pretty standard (herb-stuffed and butter-rubbed). So this year, I'm inspired by French takes on turkey. Since our celebration this year here in London will only include three people, instead of going with a giant bird, I'm concentrating on my favorite part: the legs. After being blown away by Suzanne Goin's turkey leg confit in this month's Bon Appetit, I came up with this version of turkey leg "coq" au vin.

First, I brown off the drumsticks (two will do for four people), and then little cubes of pancetta. In go the mushrooms—I use thickly cut portobello for texture—then whole shallots, slivered garlic, and fresh thyme. Some flour, cognac, wine, and stock later, the turkey legs blip away in their little bath until the meat falls off the bone three hours later.

The sauce is thick, sweet, and savory in that way good coq au vin is. I serve it with mashed potatoes or buttered gnocchi and a big green salad or my warm roasted shredded Brussels sprouts salad. It's definitely for a French-American Thanksgiving, but it also works wonders if, like me, you're only cooking for a few. That gives you an excuse to experiment—another thing to be thankful for! 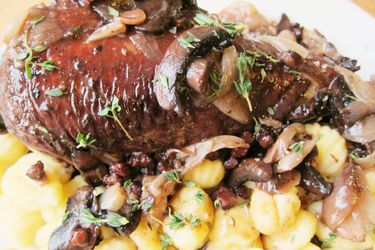