One of my old friends had a dinner party last week, and I went over in an Ethel Mertz capacity—as an old friend and neighbor, rounding out a party of newer chums. I liked them, especially when one friend, Nicky, came up to me and said that she had been making recipes off my blog for herself and her boyfriend.

I was thrilled and nervous, as I am when anyone tells me they make one of my recipes, and so I asked her if she had any requests. She did:

"Can you make some duck?"

There is something super autumnal about duck. It has the false levity of being poultry, but is unmistakably cold-weather decadent. I decided I would put together the perfect autumn salad out of my mock-confit leg of duck and a light, crunchy root vegetable slaw.

My mock confit of duck is a house favorite. I just salt duck legs and put them in a skillet over medium heat, skin down, until the skin begins to crisp. Then I transfer them to a low oven and cook them for two hours, flipping once. They come out with skin and meat crackling and velvety, just like confit, but without all the fat. On the side, I made a slaw of thinly sliced celeriac, beets, fennel, carrots, and shallots, tossed with parsley and a cider vinegar-thyme vinaigrette. I let the slaw sit and marinate in the fridge while the duck roasts so it softens, and everything melds together in a kind of beet and apple cider haze. The duck side is crisp, salty, indulgent, satisfying, and the slaw is refreshing, snappy, bright, and deep from all those root vegetable flavors that run from sweet to savory.

This one's for you, Nicky! I hope you like it. 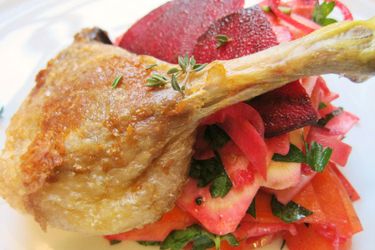