French in a Flash: One-Pot Sausages and Lentils with Sweet Roasted Shallots

One of my favorite pastimes is reading French menus. Tantalizing. Always full of combinations that seem so obvious in retrospect, but that would never have occurred to me. Strawberries and thyme. Salmon and lentils. Pears and ham. They are where I get most of my cooking inspiration, even when I never try the dish I spy somewhere after Entrées and before Désserts.

One night last summer when I was in Nice with my family and Mr. English, I skittered between two restaurants half a block apart, reading their menus. "This one, this one!" I begged. I had spied something, a local specialty, that I just had to try: sausages and lentils. So humble, and yet I knew it would be elegant in its simplicity. Really good, firm French lentils that never lose their figure. Sausages full of smoky bacon, wine, and garlic that snapped under the point of a knife. Both the sausages and the lentils were listed next to their provenance. These were special sausages, special lentils, with a pedigree and a history. Who could resist?

Apparently, my entire family and Mr. English. They all wanted to go to the pasta place down the street. So I consoled myself, as I twirled my tagliatelle with pistou around the tines of my fork, that I would try sausages and lentils at home. And I have, in about ten different ways. This recipe is how to make sausages and lentils—one of those genius French combinations I stole from a French menu—in a jiffy.

I toss slivered shallots and Toulouse sausages—full of bacon, red wine, and garlic—with olive oil, and roast them until the sausages blister and the shallots caramelize. Then, I hit them with a splash of white wine and easy, organic canned du Puy lentils. After adding some torn herbs and giving it a few minutes under the broiler, the one-pot peasant dinner is done. I serve it with a greens and walnut salad tossed in a whole grain honey mustard dressing. It has all that French country charm with a distinctly American practicality that I love. Really French in a Flash. 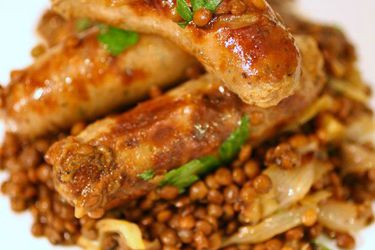