Last week I wrote about my trip to Provence this past summer, and my stay in a little seaside town called Cassis. I thought, from the name of the town, that I'd be sipping Kir Royales made with Burgundy's specialty crème de cassis (made from the homonymously named blackcurrant), but I ended up spending my entire trip in pursuit of the perfect bouillabaisse.

Bouillabaisse is a saffron seafood stew with a past. As the fishermen in Marseille harbor went out to collect the great fish they would sell to the upscale restaurants, they would also collect little local rockfish for themselves, like rascasse or scorpionfish. These they would throw jumbled into a stock nearly identical to the equally iconic soupe de poisson, along with some potatoes. And that would be dinner.

Now, bouillabaisse, once a pauper's supper, has become a feast for kings. The best, or rather, the most expensive coastal establishments specialize in it, and all compete over whose "façon" is the best. When I arrived at Chez Gilbert on the Cassis harbor, I didn't need a menu—the foursome next to us told me that one of their crowd had dragged them all down from Paris just for Gilbert's bouillabaisse. I told the waiter I wanted bouillabaisse, and a salad.

"Non, non, ma fille," he admonished. "When you eat Bouillabaisse, you eat nothing else."

He emerged first with the array of fish, head, tails, fins, and all, and potatoes on a silver platter. Then he re-emerged with the filets of the deceased on a large plate, and started spooning broth into my plate. He rattled of the names of all the fish, and I couldn't keep up. Everyone in my family started stealing bits and bites—at first, I was fencing them off with my spoon, but soon enough I was begging them to take some of the feast off my hands. The soup is thick from the flesh and bones of fish, and stained and spiced with saffron and garlic. Bits of tomato punctuate the sauce, and it is served with toasted slices of baguette and rouille, a rust-colored aïoli with saffron and peppers. It is pungent, and warm, but light, and briny. It's the seaside.

My first entry of this column was an attempt to streamline bouillabaisse for an easier, simpler, and more elegant home-cooked meal. This is my second attempt. Using only shellfish, I reconstruct the bouillabaisse broth and toss great ribbons of tagliatelle in with the fish. The broth takes only as much time to cook as the pasta, but with strands of fennel, threads of saffron, and a mixture of clams, mussels, shrimp, and crab, it is just like the bouillabaisse at Chez Gilbert: rustic, yet haughty, and certainly evocative of another time and place. 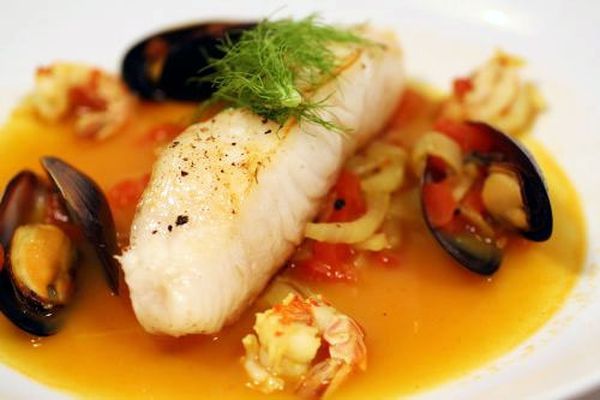 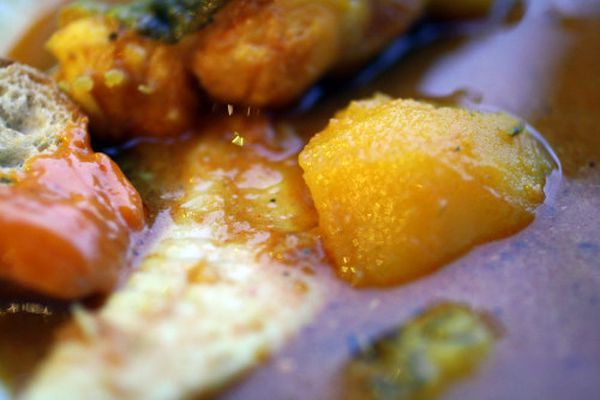