What the Frappe? THIS is a Real Milkshake

I'm here to tell you something. You know what a milkshake is, right? Ice cream, a splash of milk, perhaps some flavored syrup or malt (if you want to get extra special), all blended together with a powerful whirring disk until smooth, creamy, and thick enough that you pop a blood vessel trying to suck it up through a straw.

That's what you think a milkshake is, but you're wrong. As any true New Englander can tell you, what you got there ain't a milkshake. It's a frappe,* plain and simple.

*and that's pronounced "frap," not "fra-pay" like those silly European drinks of powdered coffee and foamed iced milk or those chain coffee shop atrocities made with dark roasts and pure calories.

"It's called a milkshake, not an "ice cream and milk blend""

Ask for a milkshake in New England, and what you'll get is a frothy, shaken mixture of milk and syrup. Milk. Shake. You take milk, you add some flavored syrup (chocolate or vanilla are classic), and you shhhhhhhaaaakkke it. Get it? I mean, just think about it. It's called a milkshake, not an "ice cream and milk blend" or an "ice cream just thin enough to fool you into thinking you can drink it with a straw but just thick enough that you actually can't," right?

Actually, truth be told, if you order a milkshake in New England with anything other than the towniest accent, what you'll probably get is a waitress who says to you "you mean a frappe, right?" Because 10 out of 10 times, when that waitress hears a flatlander order a milkshake, what they're really after is a frappe, the proper name for what everyone else in the world calls a milkshake.

I mean, I love a good, thick milkshake with my burger as much as the next guy, unless that next guy happens to be Max, or perhaps Ed, or—who am I kidding?—I'll admit it: most people like milkshakes with their burgers more than I do. In fact, I outright don't get it. A cheeseburger is rich, heavy, filling fare. You don't want to wash down heavy with heavy. I have a hard enough time swallowing a milkshake on its own. What business does it have washing down my burger?

A milkshake—the kind made just with milk and syrup—, on the other hand, is thin. A milkshake is frothy. A milkshake is sweet and refreshing, it gets sucked straight up by your straw and is wicked pissah at washing down grinders. It's a far better drink to have with your cheeseburger than a frappe. A frappe is a dessert. It's a meal unto itself. It's something you drink when you're willing to wait out the laws of thermodynamics until it hits that sweet spot of being just thin enough to get up that straw.

Come to think of it, to be completely honest, I can't remember the last time I've seen someone order an actual milkshake, even in New England. You're more likely to get a coke, or if you want to be all old-timey, you'll order a tonic—what folks used to call all sodas in New England. And get this: you won't be ordering that soda at the corner store or the deli or the sandwich shop, you'll be ordering it at the spa, the generic term for a shop that features a soda fountain (I'm talking the old fashioned kind, operated by a soda jerk who'd mix in syrups and flavorings to order).

I'm not sure where the "spa" nomenclature came, but you still see a few of them around, even though the soda fountains are long gone. The story that seems to make the most sense is that "spa" comes from the Eastern Belgian town of Spa, famous for its natural soda springs. You serve soda? You're a spa. Plus, as Village14 points out, to a Puritan New Englander, ordering a tonic at the spa just sounds so much more wholesome than ordering a soda at the deli, doesn't it?

Anyhow, I digress. The real point here is this: If you've never had a real milkshake (and chances are, whether you're from New England or not, you haven't), then I heartily suggest you try one, even the most devout frappe (ok, thick milkshake) lover can learn to love both. They're easy enough to make at home: Combine ice cold milk with either chocolate syrup or a bit of sugar and vanilla, froth it up with stick blender, and serve it in a chilled cup. Preferably while you're wearing your dungarees. 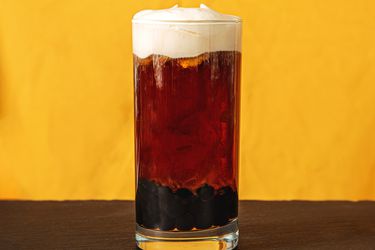 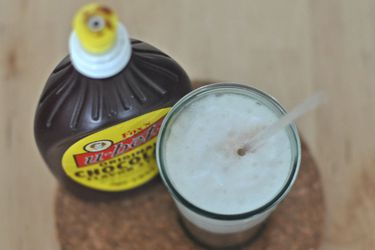