Caroline Russock
Caroline Russock is a writer who splits her time between Philadelphia and the Caribbean covering food, travel, leisure, lifestyle, and culture.  Her writing is featured in PhillyVoice, Eater, Eater Philly, Serious Eats, and The Tasting Table.
Learn about Serious Eats' Editorial Process
(4)
0

"This sauce is my new go-to when it comes to anything red sauce-related."

My quest for the perfect tomato sauce has been a long and arduous one, involving countless cans of tomatoes, garlic cloves, and liters upon liters of olive oil. It's a question of finding the perfect balance of sweetness and acidity using a very limited amount of ingredients.

I've cooked up the $30 tomato sauce with cans of San Marzano tomatoes—it wasn't nearly up to par. I've made many batches of red sauce finished with a spoonful or two of sugar, but every time I've resorted to this it's feels like cheating. For many years I've relied on Mario Batali's sauce, which adds a grated carrot to the mix to balance out the acidity of the tomatoes—but somehow the carrot didn't really feel like it belonged. None of these recipes have hit the mark as far as richness of texture and tomatoey flavor go.

So I was a bit dubious when trying this recipe from The Frankies Spuntino Kitchen Companion & Cooking Manual by Frank Falcinelli and Frank Castronovo. The list of ingredients was about as stripped down as you can get— tomatoes (San Marzanos from La Valle are recommended), olive oil, 13 cloves of garlic (which seems like a very arbitrary number), and a pinch of red pepper flakes. But it's the cooking time and the quality of ingredients that makes this sauce great.

In my usual red sauce-making, I allot two hours for simmering. I always thought this was a good enough window of time for the tomatoes to break down into a sauce and release their sugars, but nine times out of ten this isn't the case and I'm left with a sauce that's not nearly as sweet and mild as I would like.

In the Frankies' version the sauce is left to cook for a long and slow four hours, which seems to be the magic number for marinara. You are left with a thick and rich sauce, with the flavor of the sweetest summer tomatoes. Great on its on or even better with a few of the Franks' meatballs (stay tuned for that recipe later this week), this sauce is my new go-to when it comes to anything red sauce-related. And when the Franks' tell you this is a sauce that benefits from a little mothering, it's worth listening.

As always with our Cook the Book feature, we have five (5) copies of The Frankies Spuntino Kitchen Companion & Cooking Manual to give away this week. 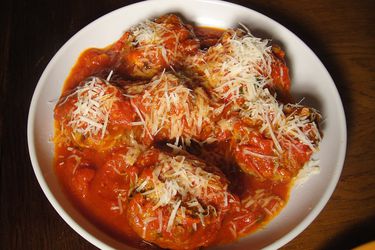