Here’s a secret most restaurants don’t want you to know: That $40 duck breast they're selling you is one of the easiest pick-ups* in a kitchen. During busy service, I’d take searing duck breast over poaching eggs, hands down. With just a few simple steps, you can impress friends and charm lovers with fantastic duck breast, any night of the week.

*What? Not hip to "pick-up"? That's restaurant-speak for fulfilling an order, a.k.a. making food, a.k.a. cooking.

Unlike chicken, duck breast has a hue and texture akin to that of red meat and is safe to consume medium-rare, so bring on the pink. Perfectly cooked duck breast will have moist and juicy meat, with a luscious and crunchy skin. The first step is to score the fat to help it render more efficiently. Ducks are busy commuter birds who need lots of fat to fuel them through long flights. This thick fat, when rendered down to a slender and succulent layer beneath crisp skin, is a culinary marvel, but you can easily end up with too much of a good thing. Scoring gives the fat more exposure to heat by increasing the surface area and allowing it to render faster.

Because I prefer some fat left under the skin, I make very shallow cuts in a tight crisscross pattern across the surface of the duck. With a sharp knife, this requires virtually no pressure: I just slide the blade along, while barely breaking through the skin. If you prefer to render out more of the fat, simply make deeper cuts. But take care—if you see flesh, you’ve gone too far! Even if you don’t plan to eat the fat at all, don’t be tempted to remove it prior to cooking. That layer of fat protects the meat, allowing you to cook it gently and evenly; because duck is best served medium-rare, that extra protection is one of the core reasons why searing it to the perfect degree of doneness is so easy. Cutting through to the flesh, however, will expose the meat to direct heat, overcooking it before enough fat has rendered out, so maintain a delicate touch while scoring the skin.

Calling this a "seared" or "pan-roasted" duck breast feels somewhat misleading, because both those terms imply high heat. Instead, this method cooks cold duck breast in a cold pan over low heat. When duck breast is seared at a higher temperature, the flesh quickly cooks before enough fat has rendered out, leaving you with a thick, flabby layer of fat over tough meat. When you use gentle heat, the fat has time to render off, while heat slowly transfers to the flesh through the buffer of the thick skin layer. This gives you tender flesh with a minimal gradient, as well as delicious, crisp skin.

Every time I’ve cooked duck breast in a restaurant, there was a mythical corner on the French top that was roped off as the "duck zone." This was a place with the perfect level of heat, at which duck breast would practically cook itself, leaving me with 15 minutes to focus on fussier things, like tweezing herbs. The trick to cooking duck breast at home is to figure out how to hit that sweet spot on your own burners.

I’ve already established that high heat is off the table, but even within the subjective terms of "low to medium-low heat," there’s a lot of variation. The temperature can be too low (as I discovered while futzing with our test kitchen’s induction burners), resulting in such a long cook time that the duck will ultimately overcook before the fat renders. With high temperatures leaving excess fat behind, and low temperatures resulting in overcooked meat, we need to find that ideal temperature zone. I firmly believe that the best way to do so is by listening to the sound of sizzles.

When you want a hard sear on a steak or scallop, you know you’re on your way if you hear excited pops and sputters once it hits the pan. Because the duck starts in a cold pan, it’ll be a silent start, but you’ll know you’ve hit the right pan temperature if, after about five minutes, you hear quiet bubbles of fat gently gurgling away. We want babbling-brook bubbles—more activity than a stagnant pond, but far short of spraying waterfalls—so adjust your stove to maintain this gentle heat, and frequently pour away any fat that melts off (and be sure to save it for some of the best roast potatoes you’ll ever eat).

After about 15 minutes, the duck breast will be rare and should register about 125°F (52°C) on an instant-read thermometer. At that point, I crank up the heat to medium and flip the duck before continuing to cook it on the flesh side for an additional one to two minutes, or until the internal temperature hits 130°F (54°C). This’ll get you a perfect medium-rare breast; if you prefer your duck cooked to medium or well-done, give it some more heat on both sides, cooking until the internal temperature is about 140°F (60°C) for medium and 155°F (68°F) for well-done.

The duck needs to rest for about 10 minutes before you can dig in, which is exactly how much time it takes to scrape up all the delicious brown bits into a quick pan sauce. There’s a special place in hell for fond wasters, so never leave any behind.

Finding the "duck zone" on your own stovetop will allow you to make this tender and juicy duck breast any time. 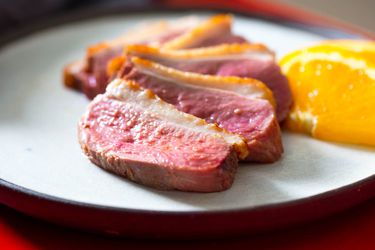 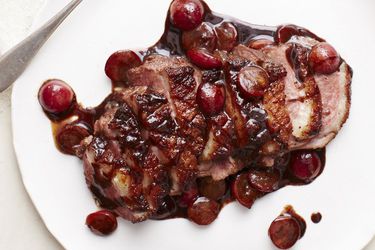 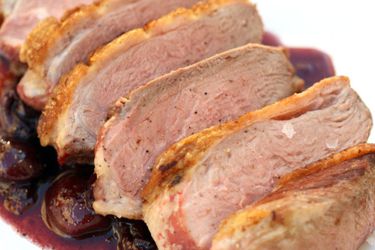