J. Kenji López-Alt
Culinary Consultant
Kenji is the former culinary director for Serious Eats and a current culinary consultant for the site. He is also a New York Times food columnist and the author of The Food Lab: Better Home Cooking Through Science.
Learn about Serious Eats' Editorial Process
(12)
0

Here's something I've always wondered: When baking pasta, as in, say, lasagna or baked ziti, why do you always cook the pasta first? Aren't you inviting trouble by cooking it once, then proceeding to put it in a casserole and cooking it again? Well, there's the obvious first part of the answer to this question: Pasta needs to absorb water as it cooks—a lot of water, around 80 percent of its own weight when perfectly al dente. So, add raw pasta directly to a baked pasta dish, and it will soften all right—it'll also suck up all of the moisture from the sauce, leaving it dry or broken.

Here's the thing: Dried pasta is made up of flour, water, and, on rare occasions, eggs. Essentially it's composed of starch and protein, and not much else. Starch molecules come aggregated into large granules that resemble little water balloons. As they get heated in a moist environment, they continue to absorb more and more water, swelling up and becoming soft.

But who's to say that these two phases, water absorption and protein denaturing, have to occur at the same time? H. Alexander Talbot and Aki Kamozawa of the fantastic blog Ideas in Food asked themselves that very question, and what they found was this: You don't have to complete both processes simultaneously. In fact, if you leave uncooked pasta in lukewarm water for long enough, it'll absorb just as much water as boiled pasta.

Here's what they had to say on the matter:

The drained [soaked] noodles held their shape, and since the starch had not been activated, they did not stick to one another and could be held without the addition of oil. Once we added the noodles to boiling salted water, we had perfectly cooked al dente pasta in just 60 seconds."

To try it out myself, I placed some macaroni in a bowl of warm tap water and allowed it to sit, pulling a piece out every five minutes to weigh how much water it had absorbed. After about 30 minutes, it had taken in just as much water as a piece of cooked boiled macaroni, all while remaining completely raw!

But what it does mean for a home cook is this: Any time you are planning on baking pasta in a casserole, there is no need to precook it. All you have to do is soak it while you make your sauce, then combine the two and bake. Since the pasta's already hydrated, it won't rob your sauce of liquid, and the heat from the oven is more than enough to cook it while the casserole bakes. If you taste them side by side, you can't tell the difference between precooked pasta and simply soaked pasta. Think of what this means for lasagna! I know of at least six different common dental procedures that I'd rather have performed than to have to par-cook lasagna noodles.

Marcella Hazan's recipe for tomato sauce may deliver the most culinary bang for your buck that you'll ever see. It's so simple it doesn't even need a full recipe—just simmer a 28-ounce can of whole tomatoes with five tablespoons of unsalted butter and an onion split in half, crushing the tomatoes against the sides of the pot with a spoon—but the flavor you end up with is rich, fresh, and perfectly balanced. It's the butter that makes the difference. Unlike olive oil, butter contains natural emulsifiers that help keep the sauce nice and creamy. And the dairy sweetness works in tandem with the sweetness of the onions while rounding out the harsher acidic notes of the tomatoes.

This recipe is an excerpt from J. Kenji López-Alt's book, "The Food Lab: Better Home Cooking Through Science."

Look for a ricotta cheese that contains nothing but milk, salt, and starter culture or acid. Avoid those with gums and stabilizers. Our favorite national store-bought brand is Calabro. 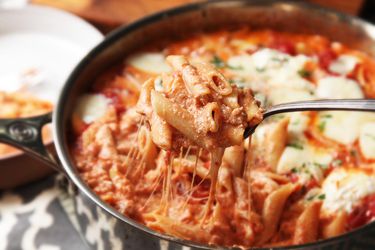