The other day, I asked folks on Twitter what, in their minds, is the difference between home fries and potato hash. Hoo boy, was that a can of worms. Most of the debate seems to be about what constitutes hash. Is it shredded and fried potatoes? (Those are hash browns, not hash, to me.) Should hash be smashed and cooked on a flat top? (That does sound delicious, but more like a potato pancake to me.) Are home fries distinct, while hash is more cohesive? Are home fries potatoes only, while hash has other stuff mixed in? Are home fries disks, while hash is cubes? Et cetera, et cetera.

We may never be able to satisfactorily come up with nomenclature that makes everyone happy here, so I'm not going to even bother trying. Instead, I'll go with my gut. To me, potato hash has relatively small cubes of potatoes, while home fries tend to be larger chunks (hash browns are shredded). Exactly where that hash/home fry divide lies may be up for debate, but it's the kind of debate everyone should immediately drop once crispy potatoes hit the table.

I know people—especially New Yorkers—have a thing for diners, and I sort of get it, but they really aren't my cup of tea (or should I say my cup of stale coffee?). I think my problem is really one of quality over concept. Fact is, most diners just aren't that good. Frankly, I can deal with the crappy coffee, since I'm more of a tea drinker anyway. I'll put up with fried factory-farmed eggs, even with the inevitable runny whites or made-from-powder Hollandaise on top. There's a spot in my heart for the squishy softness of toast made with highly processed white bread. I can even tolerate soggy bacon. The problem is the home fries. With rare exception, home fries at diners are not crisp.

The vast majority of the time, short-order cooks will chop up a case of potatoes and toss them raw onto the back of a flat top greased with butter (or, frequently, butter-flavored shortening), where they sort of steam. Sure, they give them the occasional flip and toss. If they're really good, they may even pull out a small pile to the hotter part of the griddle to lightly crisp before serving, but even home fries that are crisped like this end up softening and turning soggy by the time the plate makes it to your seat at the counter. In the worst cases, the potatoes are soggy on the outside and still borderline raw in the center (and, in my experience, there's a good 50% chance that you'll end up with these worst-case potatoes).

Every bite of soggy, greasy potatoes at a diner is a reminder of what great home fries can be. Every trip to the diner is like a unicorn hunt—we're chasing those perfect, crisp home fries, but rarely catch more than a glimpse of them.

Here's the good news: You don't even have to leave home to catch that unicorn.

The basic steps I follow to make these home fries are almost identical to the rules I set out in my guide to making potato hash. For hash, I tend to prefer larger russet or Yukon Gold potatoes, whereas for home fries—and this is purely a stylistic choice—I like to use smaller new potatoes with their peel intact, giving each chunk a bit of flavorful skin.

I start by boiling the new potatoes in water that's been spiked with vinegar and salt. Boiling potatoes before frying them is an essential step to getting maximum crispness. Boiling causes starch granules in the potatoes to swell and burst. When the potatoes are subsequently drained and slightly cooled, that gelatinized starch retrogrades and forms a crystalline structure.* That new structure is far more conducive to dehydration and crisping than the raw potatoes, which allows you to build up a significant crisp layer as you fry them. The same process is what makes double-fried French fries retain their crunch, and is the secret to ultra-crispy roast potatoes.

*This is the exact same effect that makes bread go stale.

Why the vinegar and salt? Well, salt is easy—that adds flavor. Vinegar I add for its chemical effects. Like all plant cells, potato cells are held together with pectin, a sort of carbohydrate glue. Pectin starts to break down at 183°F, and the potatoes start to soften. Let them cook for too long and they soften to the point of turning mushy or crumbly. On the other hand, don't cook them long enough and you won't burst enough starch granules, preventing the potatoes from crisping properly. Vinegar will actually affect the rate at which pectin breaks down, slowing it down and vastly increasing the window of time between perfectly cooked potatoes and overcooked potatoes. It's not totally necessary, but it makes things easier.

Once the potatoes are boiled and tender, I let them cool slightly and cut them into quarters before frying them in a skillet.

If I ordered home fries at a diner, I'd be perfectly happy with these potatoes on their own, but for me, home fries are never really complete without peppers and onions.

The easy way to add peppers and onions to your home fries is to simply slice 'em up, sauté them, then toss them all together with your potatoes. There's absolutely nothing wrong with that. But, having experimented with a number of pepper preparations, I'd suggest to you that dropping wimpy bell peppers in lieu of a fresh Poblano pepper, with its deeper flavor and hit of heat, is a good upgrade. An even bigger upgrade is to char that Poblano pepper directly over a gas flame or under a broiler to loosen its skin and add some smoky flavor, then cut it into strips (a.k.a. rajas, in Mexican Spanish).

Charring that pepper is not entirely necessary, but it will change your brunch guests' or family's reaction from "yum, these are good home fries, let's have them again sometime" to "I would like to get these home fries' phone number so that I might have the pleasure of its company again in the future, and I'm even willing to break the wait-three-days-before-calling rule."

What about those onions? With hash, I tend to slice my onions quite thin so that they almost melt into the dish in between those little crispy chunks of potato. With heftier home fries, I prefer heftier onion slices, which I sauté until they're browned but not mushy, giving them a nice sweetness. Red onions are pretty and offer good flavor, but you can really use whatever onions you have on hand. I add some fresh thyme leaves to the onions at the end, which get their flavor into the oil—and, via the oil, into the rest of the dish—while retaining some fresh flavor.

Everything—the crispy potatoes and the peppers—goes back into the skillet for a final toss and a taste (don't forget your salt and pepper!), and the home fries are ready to go. 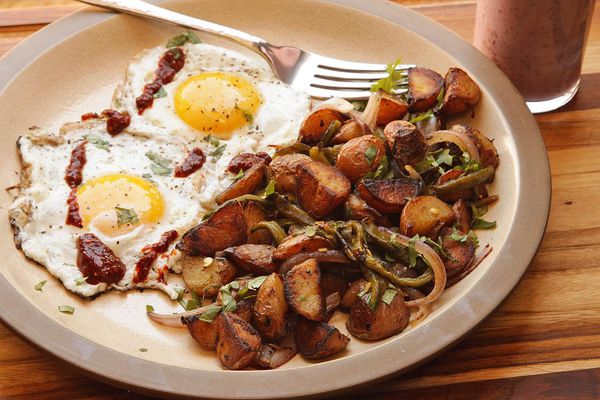 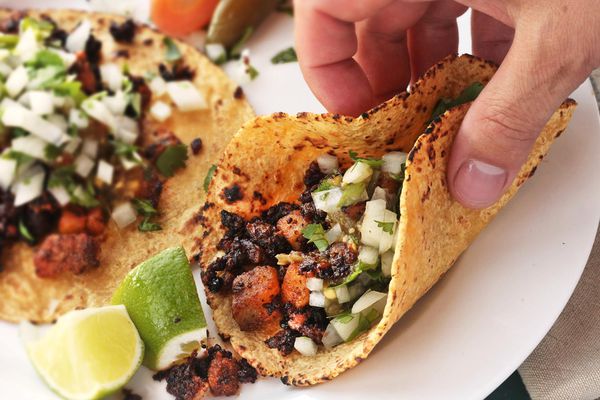