Last week, I co-hosted an event at the New York Wine & Food Festival in which a few of our favorite chefs cooked their favorite soups. My favorite of the bunch: Marco Canora's escarole soup.

His version had these terrific little chicken dumplings, but seeing as I have a wife who leans vegetarian and I myself tend not to eat much meat in my off-duty hours, I wanted to convert this great concept into a more veg-friendly version.

It starts off pretty similarly to the meaty version, with a sauté of mirepoix—diced onions, celery, and carrots.

Once they're sweated out, I add garlic and rosemary. The latter is a key ingredients for many of the vegetarian soups I make. Added raw at the end of a dish, it can have an overpowering flavor, but cooked down from the start, it mellows, adding a savoriness that permeates the entire dish.

Braised greens are a non-intuitive but fantastic alternative to meat in many of my vegan recipes. The idea first struck me when I tasted the braised greens and shallot sandwich at my friend Charles Kelsey's Boston sandwich shop Cutty's. I made my own version with braised kale last year. It's juicy, savory, and intensely satisfying.

In soup, greens work just as well. To maximize their flavor extraction, it's best to sauté them along with the rest of the vegetables. Here I'm using escarole, which has a very mild bitterness that mellows with sautéing, while at the same time intensifying its natural sweetness.

Tomato paste, packed with glutamatic acid adds both savoriness and a bit of body to the finished soup. I sauté it until all the vegetables are coated and they start to sizzle, indicating that most of the excess moisture in the pot has evaporated.

My version isn't going to have chicken dumplings, but pearled barley adds the requisite heartiness to turn this soup into a main course.

With the veg sautéed, the rest is all about simmering. Chef Canora uses an incredible broth made at his restaurant with whole turkeys, chickens, and beef bones simmered all day in giant pots. I have neither the inclination nor the wallet to use whole birds just for the sake of stock, but I do make chicken stock at home using trimmings from birds whenever I collect enough of them.

In fact, you can even use store-bought chicken or vegetable broth for this soup because we've got a secret trick to bump up the flavor: a couple of bay leaves and a hunk of Parmesan rind (actually Grana Padano rind in this case). More importantly, the proteins extracted from the cheese help emulsify the soup so that rather than having a slick of olive oil on the surface, it gets evenly incorporated into the broth.

The last trick? A couple of extra umami bombs: a dash of soy sauce and, if you're not going strictly vegetarian, fish sauce as well, which contains inosinic acid, another compound that works in conjunction with glutamic acid to trigger your sense of savoriness.

Served with a drizzle of really good extra virgin olive oil (my current favorite is the awesome Arbequina oil from Séka Hills) and a grating of cheese and you've got a fall soup so comforting and filling that you'll never question its meatless status.

Perhaps Chef Canora will have something to say about my bastardization of his beloved soup, but even if he puts me out, I'll take it, knowing I've got a big ol' bowl of comfort waiting for me at home. 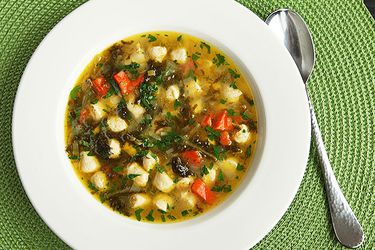