Thicker is not always better. I like my milkshakes drinkable through a straw and my friends relatively intelligent. But when you're talking a high-end steak for the grill or cast iron skillet, your steak's got to be at least thick enough to allow you to get a really great, crusty sear without overcooking the center. This means a minimum of an inch and a half, and preferably closer to the two inch range.

That's a fat steak, and it comes with its own set of problems; namely portion size. A thick tenderloin steak might come in at a reasonable six to eight ounces, but a New York strip or ribeye in that range can easily tip the scales to over a pound—far too much meat for a single person to eat on a reasonable night of the week (if we're talking unreasonable nights, that's a whole different story). So other than sharing (and who wants to do that), how do you get a steak that's thick enough to cook properly, but not so thick that you can't finish it off in one go?

Normally, when you ask a butcher to cut you an eight ounce steak, they adjust the weight by slicing it thicker or thinner. Taste-wise, it's a better approach to cut a thick, one pound steak, and slice it into two chunky pieces.

Because the thickness of each half is the same as that of the original, the cooking time and method for them is pretty much exactly the same as you'd use for a full-sized steak on the grill or in a skillet. It just makes the whole thing a bit more manageable.

When we're talking thick steaks on the grill, that means starting them over the cooler side until they reach an internal temperature just a few degrees lower than where you'd like them to end up, then finishing them off on the hotter side of the grill to char them. This method, known these days as the "reverse sear," was a method I initially developed as an oven-to-skillet method for Cook's Illustrated back in 2007, but it translates brilliantly to the backyard grill, producing meat that's noticeably more juicy and evenly cooked, with an intensely browned crust. (Read more about grilling steaks in my complete guide here).

In the summer, I like to keep things light by serving grilled meats with cool, refreshing, crunchy salads, like this version with cucumbers, parsley, and tomatoes dressed with yogurt (the first batch of tomatoes on the plant that I keep on my deck are finally ripening. I've got to use them fast before the dog sneaks out and eats 'em). The only other real secret is olive oil. Really, really good olive oil.

Special thanks to our friends at Snake River Farms for providing the meat for this recipe testing. 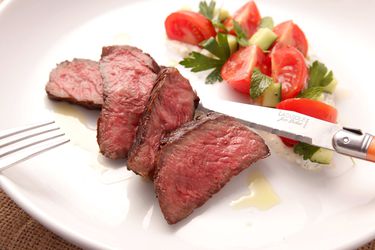