The other day, I made a quesadilla for my wife, Adri, before stepping out of the house. A few minutes later, she texted me to reluctantly let me know that my quesadillas have always been the best she's ever had. I responded with this, to which she said this. What can I say. The occasional bout of cockiness is one of my many flaws.

It's good to recognize your flaws, but it's also good to recognize your skills. If there's one thing I know I'm good at, it's making kickass quesadillas. Not authentic, not fancy, not gourmet; just tasty. I mean, let's be honest: You can microwave some pre-shredded cheese on a tortilla, fold it in half, and end up with something tasty. But I'm talking really frickin' tasty here.

Kickass-Quesadilla Tip #1: Mix the Fillings With the Cheese

Nothing cobrars my cabra more than lazy quesadilla-layering. You know what I'm talking about. The brewpub that makes its chicken quesadilla by placing slices of chicken on top of a layer of cheese in a tortilla, sandwiching it together, and cooking it. You end up with strips of chicken that pull out when you bite and a quesadilla that's barely held together. Instead, it's much better to cut, chop, or shred the fillings into bite-size pieces before tossing them together with the shredded cheese, so that everything forms a single cohesive filling when the quesadilla cooks. Think of it as the cosmic oneness theory of quesadillas.

Designing a good quesadilla is sort of like designing a good sandwich. Ham and cheese between two slices of bread do not make a great sandwich. But add some creamy mayonnaise, maybe some bright pickles, and some crunchy vegetables, and we got a decent lunch going on. Similarly, with quesadillas, I always like to incorporate some sort of bright, fresh, hot, or crunchy element to offset the creamy richness of the cheese. Think pickled peppers or smoky chipotles in adobo, sweet corn or minced jalapeños.

There are two ways to construct a quesadilla. One is better than the other. The bad way is to spread your filling entirely over one tortilla, then place the second on top. This makes it impossible to flip the darn thing without letting the filling fall right out. The good way is to spread the filling over half of a single tortilla, then fold the other half over to form a semicircle. Neat, compact, and easy to flip. Leaving a small border of filling-free tortilla around the edge can also help things stay neat (though there is something to be said for letting that cheese leak out to form crispy edges).

Kickass-Quesadilla Tip #4: Use Plenty of Oil, and Keep It Moving

Even the best skillet in the world is gonna have hot and cold spots, and as the quesadilla bubbles and puffs, it's gonna push away from the skillet unevenly. To combat these problems, there are two things you should do. The first is to use moderate heat and plenty of oil; I use about two tablespoons for a 10-inch cast iron skillet. Using plenty of oil means that even if the quesadilla pushes away a little, it'll still be in contact with that oil, ensuring good browning and crisping all over its surface.

The other trick is to keep it moving. Swirl it around, rotate it with your hands, shake the skillet, whatever it takes. Just make sure that the tortilla moves frequently for even cooking. Like a good grilled cheese, a good quesadilla is one that takes its time cooking, for a thoroughly melted interior and nice, even browning.

The last trick is to make sure that the quesadilla is well seasoned, inside and out. That means seasoning it with salt right after flipping so that the salt has a chance to stick to the hot surface. Think of it like the sprinkle of salt on top of your pretzel: The pretzel is fine without it, but it's kickass with it.

Once the quesadilla is flipped and both sides are browned, I give it a final drain on paper towels, then cut it into triangles for immediate consumption. Because, as we all know, triangles taste better.

Why do triangles taste better? All I can say is this. 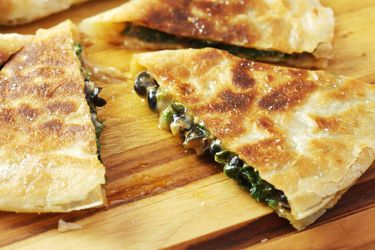 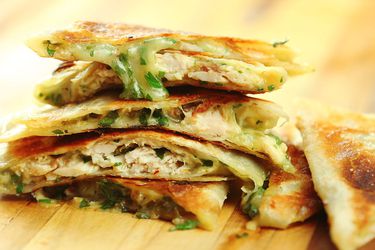 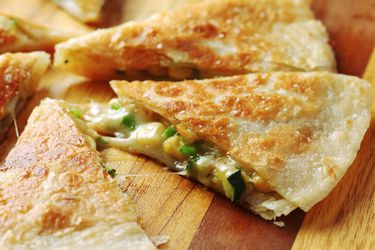 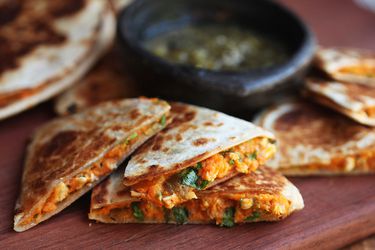