Rare seared tuna might have fallen off the menus of the most fashionable restaurants, where it ruled the scene from the late '90s through the 2000s, but that doesn't make it any less delicious. Ideally, seared tuna should have a dense, meaty center and a thin, thin layer of browned meat on the exterior.

Historically, this has meant tuna served in the style of tataki, a traditional Japanese preparation in which the bulk of the tuna is essentially cold and raw. With the precise control of a sous vide cooker, you have a few more options. Rather than cold and raw in the center, you can serve tuna that's heated just to the point of starting to firm up, giving it an even meatier bite while maintaining a gorgeous, translucent deep red color and moist texture.

Sous vide is also a great way to prepare tuna to be served nearly raw, sashimi-style, or to be used in recipes where you'd typically use canned tuna, giving you better texture and flavor than any canned option.

Unlike fishes that turn firm and flake but still maintain some moisture at higher temperatures, like salmon and cod, tuna is extremely susceptible to overcooking. Think well-done beef steaks. And, even more than with beef, that transformation happens very rapidly with tuna. At 115°F, tuna is still quite moist and translucent. A mere five degrees higher, at 120°F, it'll be as firm and dry as a well-done steak. At even higher temperatures (130°F and above), as connective tissue breaks down further, you end up with a texture similar to that of canned tuna—chalky and crumbly—and tuna cooked that hot should be treated as such (i.e., make sure to add plenty of fat, in the form of olive oil or mayonnaise, when serving it).

I personally like tuna cooked at three different temperatures: 105°F, for a texture that is similar to sashimi but slightly firmer; 115°F, for flesh that's moist, yet has firmed up to a texture similar to but more tender than rare beef; and 130°F, for tuna that tastes like the most delicious canned tuna you've ever had.

As for timing, there's no need to leave tuna in a water bath for longer than it takes to just cook through—a half hour to 45 minutes is plenty for one-inch steaks, and 45 minutes to an hour for steaks up to two inches thick.

What Kind of Tuna Should I Buy?

Many types of tuna are dangerously overfished, and I strongly advise doing some research on the type of tuna you are buying before purchase. The Monterey Bay Aquarium's Seafood Watch program is a great place to start. It has a website and an app that you can pull up on your phone while you're at the fish counter.

When buying tuna, I like to shop for thicker steaks, at least an inch and a half to two inches thick. Thicker steaks will give you a better ratio of rare internal meat and seared exterior. With thin steaks, you run a serious risk of overcooking, even with the brief searing time that sous vide typically requires. The general rule of thumb for tuna is that it's better to serve a single larger steak for every two diners than it is to serve individual thinner steaks.

Many recipes for sous vide tuna recommend soaking the fish in a saltwater brine before cooking, in order to season it more deeply and to give it a denser, firmer texture. I tried cooking a few pieces of tuna side by side: one plain, one soaked in a liquid salt and sugar brine, one soaked in a plain salt brine, one rubbed (dry-brined) with salt and sugar, and one rubbed with salt alone. For the brined and dry-brined tuna pieces, I tested various brining times, ranging from 15 minutes up to overnight. I cooked each sample of tuna sous vide at two different temperatures—105°F and 115°F—for 45 minutes, then tasted them.

I found sugar in the brine to be distracting, though, if you like the extra sweetness, feel free to add it. I prefer dry-brining to water-brining for the sake of convenience: All you have to do is salt your tuna, seal it in a bag, then let it rest before cooking. Half an hour seems to be the magic number—you'll get a strong brining effect, but still keep things moving along in time for dinner.

Should I Add Fat?

When cooking things like steak or chicken, I typically don't add extra fat to the bag—all it does is dilute flavor by removing fat-soluble flavor compounds. With tuna, on the other hand, I do. Not only does tuna flesh absorb flavor better than land-animal meat, but the fat also helps distribute the flavor of any aromatics added to the bag. If you're cooking more than one piece in a single bag, fat will also help keep the individual steaks from sticking together.

Do I Need a Vacuum Sealer?

You don't need a vacuum sealer for sous vide tuna, and, in fact, I wouldn't recommend using one. The powerful suction of a vacuum sealer can put pressure on the soft tuna, leaving it dented and misshapen. Because of the short cooking time and low temperature, a regular old zipper-lock bag will work fine. To seal a zipper-lock bag air-free without a vacuum sealer, use the water displacement method. It's fast, efficient, and tailor-made for situations like this.

To do it, simply place your food in a plastic bag, and seal the bag almost all the way, leaving about an inch open. Slowly lower the bag into a tub of water, holding the opened end above the water level. As the bag is lowered, the water pressure should force air out of the bag. Just before it fully submerges, seal the bag completely, and you're ready to cook.

How Should I Serve It?

Depends on how you like it! Here are my two favorite methods.

Typically, I prefer searing my tuna. Tuna has hearty, meaty flesh and can stand up to some real flavor. Searing it au poivre–style, with a heavy coating of black pepper, is a nice way to go. A mix of white and black sesame seeds is also a delicious coating, and a fun 1990s-era throwback to fusion.

However you coat your tuna, the important thing is using very high heat to sear. Your goal is to color the exterior while minimizing the additional cooking you do to the interior. This means using a little oil in a ripping-hot heavy pan (because of their weight, cast iron and carbon steel are both great for searing), or a few quick turns over the hottest outdoor grill you can muster.

Sous vide tuna is great served cold. At 105°F, it can be sliced and served like sashimi, though it will have a unique texture all its own. Try brushing it with a little soy sauce and extra-virgin olive oil and sprinkling it with some coarse sea salt for a simple, delicious hors d'oeuvre.

If you want to go the canned-tuna-texture route, you can use tuna cooked to 130°F in any recipe where you'd use canned tuna, like Tuna Salad, or stir it into pasta dishes like Tuna Noodle Casserole or Spaghetti Puttanesca.

Season the tuna generously on all sides with salt and pepper.

Place the tuna portions in a single layer inside one or more zipper-lock bags. Add a couple of teaspoons of olive oil per piece to each bag, turning the tuna and using your hands to make sure that it's coated on all sides to prevent sticking. Add some gentle aromatics, such as thyme, parsley, or dill, thinly sliced shallots, or grated citrus zest. Do not add large chunks of food, which can damage the shape of the fish, or acidic ingredients, which damage the texture.

Once the tuna is bagged, close the bag(s) and let the tuna rest in the refrigerator for at least 30 minutes and up to overnight, to allow the salt to firm up the flesh.

Set the temperature on your sous vide cooker according to the chart above, and allow it to preheat while the tuna rests.

Remove all the air from the bag or bags using the water displacement method. Then add the tuna to the preheated water bath, and cook for 30 to 45 minutes for one-inch steaks, or 45 minutes to an hour for steaks up to two inches thick.

Carefully remove the tuna from the bag, using your hands or a fish spatula. Place it on a double layer of paper towels, then use another paper towel to gently blot the surface dry. Discard the aromatics at this point. Tuna cooked to 105°F (41°C) or 130°F (54°C) can be chilled in the refrigerator and served as is. For seared tuna, proceed to step 6.

Season the tuna with a little (or a lot) more freshly ground black pepper, or roll it in sesame seeds or other seasonings of your choice.

Heat a tablespoon of oil in a heavy skillet over high heat until lightly smoking. Carefully add the tuna and cook, without moving, until browned, 30 to 45 seconds. Carefully flip the tuna and sear the second side. Using tongs, lift the tuna and hold it sideways to sear the edges all around.

Transfer the tuna to a paper towel to blot off excess oil. Serve with a fork and a steak knife, or slice with a sharp chef's knife before serving. 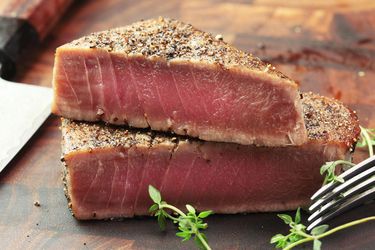 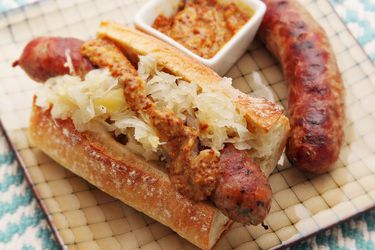 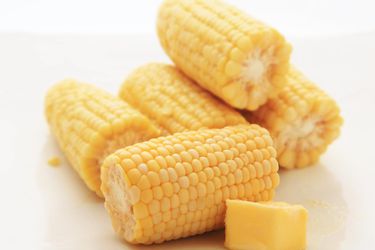