Todd Boera didn't grow up in Appalachia, but for the past decade, he's called a little slice of it home. Since opening Fonta Flora Brewery in 2014 with business partners David and Mark Bennett, Boera has become known in beer circles as the bearded, bespectacled face of the Appalachian craft beer movement. He's created some of the most unique and exciting beers I've tried in recent years: beers that are truly indigenous to the hills and hollows of Appalachia.

"Making farmhouse beer is all about sense of place, the terroir of your region," says Walt Dickinson of Asheville's Wicked Weed Brewing. "And no one is doing a better job of showcasing the biodiversity of the Appalachian Mountains in beer than Todd."

Like René Redzepi gathering sea lettuce from a Danish beach to add to a radish stew at Noma, Boera forages in the mountains of the Pisgah National Forest for ingredients to make beer at his brewery—velvety, tangy sumac; whole dandelion plants with roots, leaves, and flowers; wild plums; tart elderberries; and pungent wild fennel. Appalachians once used these items to make rustic, quick-fermented fruit and vegetable wines. But now Boera incorporates them into what he calls Appalachian wild ales: in essence, Belgian-inspired farmhouse ales gussied up with native local plants. He ferments the brews in stainless steel tanks and oak barrels, with a mix of wild yeast and bacteria he initially cultured from dandelions gathered on a cold spring morning in the mountains. The resulting flavors vary depending on what edibles are used, but taken en masse, the beers are crisp and effervescent, thirst-quenching and evocative of nature.

Boera grew up in Cleveland, but moved to North Carolina in 2004 to attend Warren Wilson College in Swannanoa, about 15 miles east of Asheville. "It was essentially a communist college experience, where everyone who attends has to work on campus," he says. The liberal arts school has a strong agricultural component, and Boera quickly found himself tending to the college's chickens, pigs, and cattle. His favorite assignment, though, was working in the mixed-crop gardens, where he learned to grow corn, tomatoes, beans, and carrots. Simultaneously, he nurtured a budding interest in home brewing and soon began incorporating ingredients from the farm into his beer experiments. He says the first pumpkin ale he made featured pie pumpkins that he'd grown on the Warren Wilson farm.

After graduation, Boera landed an assistant brewer job at Catawba Brewing Company in Morganton, North Carolina. Soon after he arrived, though, his boss, Billy Pyatt, was severely injured in a motorcycle accident that essentially left Boera in charge of the brewing operations. Left to his own devices, Boera began experimenting again, this time on a larger scale, trying different strains of yeasts and bacteria and adding local ingredients—a rare move in North Carolina at the time. One of his first original beer recipes was for Mastema Belgian Gold, a tripel brewed with local honeysuckle.

In 2013, Boera left Catawba to check out the scene in the Pacific Northwest—"I was burnt out and needed a break," he says—but, having been gone for just a couple of months, he soon returned to open a brewery with the Bennett brothers. They picked a corner spot in Morganton's quaint downtown quarter and derived their brewery's name from a lost African-American farming hamlet that once abutted the mouth of the nearby Linville Gorge. (The original Fonta Flora settlement was permanently flooded in 1916, when the Lake James reservoir was constructed for the Duke Power energy company.)

Turns out the name anticipated the beer styles that Boera would eventually become known for, though he says that specializing in Appalachian ales wasn't always a priority.

"Having a name that's so rooted to an area is itself a continuing line of inspiration," he says. "It would be weird if our name was Fonta Flora and all we made were, like, traditional German lagers."

Boera, who is heavily tattooed (hops, vegetables) and often wears a backwards mesh trucker's cap, credits his girlfriend for turning him on to herbal and natural medicines. They foraged in nearby woods, gathering roots like ginseng and wild ginger, as well as edibles like ramps, burdock, chickweed, and elderflowers—components now instrumental in his beer at Fonta Flora.

What he can't find wild, Boera procures from local farmers and maltsters. He's built relationships with small farms growing heirloom varieties of fruits, vegetables, and grains, and, like a farm-to-table chef rattling off her purveyor of grass-finished beef, Boera acknowledges many of his farmers and sources on his beer labels.

"Once you start talking to the farmers around here," he says, "you begin to really experience what this area actually is."

He gets apples from Fox Gap Farms, nine miles south of the brewery, to blend with foraged spicebush twigs for the heady Land Trust Apple Saison. Blueberries come from Perry's Berry's, just 10 miles northwest of downtown Morganton, to pair with wild elderberries for the sweet-tart Need a Hug Appalachian Wild Ale.

It all sounds romantic, but also like a huge pain in the ass—why bother to make beer like this when people have been making perfectly delicious beers from commercially grown and processed grain, hops, and yeast for centuries? Boera says what drives him is what drives many of us to shop at a local farmers market rather than going to a big-box store.

"It's all right here in front of us," he says. "It tastes better, and I get to shake the farmer's hand. I see her business profit, and she sees my profit, which boosts the community, the local culture." He adds, "It's about creating windows rather than doors."

The farms are the soul of Boera's beer. In fact, his idea for an "Appalachian wild ale" derives from the Belgian farmhouse tradition of making beer from whatever grains and ingredients were native to the region and on hand.

For Belgians, this meant brewing with raw wheat, spelt, and rye and supplementing hops with wild bittering herbs. For Boera, the idea translates to a partnership with Asheville's Riverbend Malt House. He sources western North Carolina–native Bloody Butcher corn for his Bloody Butcher grisette (a traditional European-style ale once favored by Belgian and French miners). And, for Wrens Abruzzi Rye, he uses the namesake rye variety, which has been grown in western North Carolina for more than 200 years, lending the beer a distinctive black pepper finish.

Overall, the beers are funky, rustic, and tart, with assertive vegetable, fruit, and earth components that are a bit surprising upon first whiff. But they are vibrant and alive; concentrated expressions of the region's terroir.

Perhaps Boera's best-known beer is Beets, Rhymes and Life, a 2015 Great American Beer Festival gold medal–winning saison brewed with Bull's Blood beets from Bluebird Farm, also in Morganton. (The beer was Fonta Flora's second GABF gold medal; its first, in 2014, was for a dry Irish stout, demonstrating that Boera is adept at brewing basic styles, too.) Since there is no category for Appalachian wild ale in the GABF competition, Boera entered Beets, Rhymes and Life into the "Field Beer" category, which, according to the Brewers Association, "includes any beer using vegetables as flavor...providing obvious (ranging from subtle to intense), yet harmonious, qualities." Indeed, the beautifully beet-red saison is harmonious and balanced, with earthy aromas and a tart beet-juice flavor brightened by a prickly effervescence.

Boera's interested in doing more than supporting farmers, though—his attraction to local beers is also deeply linked to questions of food security and local economies. "Globalization of our food commodities is just fucked," he says. "There are too many people trying to centralize our food sources, and this is my personal, direct reaction to that."

Soon Boera will take further steps on his long march toward hyperlocal beer nirvana: Instead of relying exclusively on local farmers for the fruits and vegetables he can't find wild, he'll grow many of his own crops. Fonta Flora recently announced a partnership with the Foothills Conservancy of North Carolina to purchase the Whippoorwill Dairy Farm, a 48-acre plot near Lake James State Park, just three miles from the original Fonta Flora farm settlement. The conservancy will donate 40 acres to the state park, while Fonta Flora Brewery will use eight acres for a true farmhouse brewery, with hops, grains, vegetable gardens, and orchards. The existing buildings of stacked river rock will house the brewery, a barrel-conditioning facility, and a tasting room, where visitors can taste the beer with the Pisgah National Forest as the backdrop.

Boera says he would often bike by the Whippoorwill farm, fantasizing about opening a brewery on the property, and one day noticed a for-sale sign posted at the entrance. After learning the asking price (more than $700,000), he thought it was just a pipe dream. "But then the conservancy came in, and all of a sudden it's becoming a reality," he says.

"It's going to open up so many possibilities, having that land to cultivate for our beers. For me, it's a dream come true."

Boera's tiny 3.5-barrel brewhouse churns out tasty beer that's always available on draft at the brewery. But bottle releases are extremely limited and often hard to come by. Check the brewery's Facebook, Twitter, and Instagram feeds for bottle-release announcements.

One of the best opportunities to try all of these beers and more in one place is at Fonta Flora's State of Origin festival, happening in downtown Morganton on June 11, 2016.

Beets, Rhymes and Life Local Beet Saison (6% ABV) After primary fermentation, Boera infuses this rustic saison with Bull's Blood beets from Bluebird Farm in Morganton, staining it a brilliant magenta color and lending aromas of freshly plowed soil and dried hay. On the palate, the beer is vegetal and peppery, like a classic saison filtered through a bushel of freshly dug beets.

Carolina Custard Appalachian Wild Ale With Paw Paw Fruit (5.9% ABV) This wild ale gets its name from the Appalachian-native pawpaw tree, whose fruit is creamy and custardy and reminiscent of heady bananas. Boera juxtaposes those flavors with a tart, dry yeast component and a wine-like acidity that dances around the pawpaw's melon- and papaya-like flavors.

Bloody Butcher Appalachian Grisette With Bloody Butcher Corn (5.2% ABV) The grisette style—similar to saison, but generally a touch lighter in body and alcohol—is said to have been the beer of choice of miners in Belgium's Hainaut province. Boera makes the style decidedly Appalachian by brewing it with North Carolina–native Bloody Butcher corn, a deep red variety traditionally used to make moonshine and mountain whiskey. The result is clean and crisp, like a thirst-quenching, lemon-spritzed seltzer.

Brutus Tart Appalachian Saison With Foraged Dandelions (5.2% ABV) Early Appalachians weren't making beer with dandelions, but they did make tea and wine from the flowers, stems, and roots. Boera takes a page from their playbook and dries and roasts the roots, while using the stems, leaves, and flowers for bittering and aromatics. The beer is at once bitter, floral, and grassy, with a hint of springtime sweetness and a tart, lemony finish.

Jitterbug Appalachian Wild Ale With Wild Plums (5.9% ABV) Boera and his team forage in North Carolina's High Country—a mountainous region near Boone and Blowing Rock, in the northwest corner of the state—for the wild plums used in this rustic wild ale. The beer is perfumed with fresh plums and berries and just a whiff of funky sourdough bread. Overall, it's a lively beer with bracing juiciness. 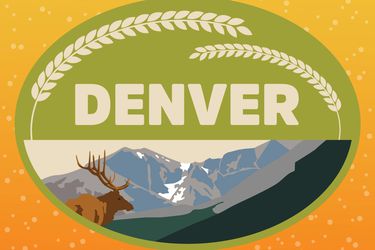 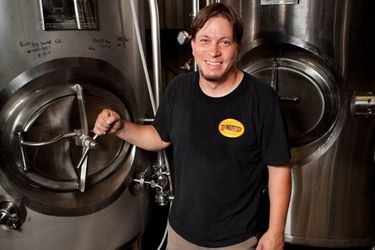