Christian Reynoso
Christian Reynoso is a freelance recipe developer with a focus on seasonal food and helping home cooks achieve restaurant-level success in the kitchen. He's the former sous chef at Zuni Café.
Learn about Serious Eats' Editorial Process
0
In This Recipe

The flour tortilla is as ubiquitous in Northern Mexican cuisine as sourdough in San Francisco and as bagels in New York. It's a distinctly regional flatbread associated with the states of Chihuahua, Durango, Sinaloa, and Sonora, one that owes its existence to a turn in agricultural history almost 400 years ago. In Sonora, white Sonoran wheat was first introduced by a Spanish missionary named Padre Lorenzo de Cardenas somewhere between 1640 and 1650. This wheat was made into masa, which was then formed into the same shape as tortillas made from corn. Ever since, wheat flour tortillas have been a staple in Northern Mexico and in the Southwest United States.

Like corn tortillas, flour tortillas are best when made fresh daily. A typical breakfast in Sonora consists of warmed flour tortillas alongside scrambled eggs and machaca (dried, pounded beef), while in the afternoon the tortillas might be filled with beans and folded into a small burrito. My parents grew up in Hermosillo, the capital of Sonora, and they recall enjoying what are called chivichangas, a kind of small, griddled burrito, a fresh flour tortilla wrapped around stewed or grilled meat. On their way to baseball games they’d first stop at a restaurant across from the park for these “chivis," which were served with a side of fresh, crunchy vegetables like radishes and lettuce.

Even though flour tortillas are a staple of the cuisine, not every family makes them. For example, my father’s family would buy them from a neighbor who had set up a comal to cook pillowy, lard-laden tortillas for all the neighbors. My mother's parents, on the other hand, made most of their meals at home, including flour tortillas. Along with her nine siblings, she’d help her mother make the masa, form the dough into balls, and cook them over a comal for the family. It’s a recipe that evolved only slightly over the years, and which she still makes today.

The Case for Making Flour Tortillas at Home

While habits are split in Mexico between those who make their own flour tortillas and those who buy them, in the US it's more clear cut: Just as most people here go to a grocery store to buy bagels or sourdough, they also rarely, if ever, make fresh flour tortillas from scratch. And while I'd encourage anyone to delve into the world of sourdough, I think there's a much more compelling case for homemade flour tortillas, which are one of the easiest and most approachable types of bread you can make at home, with results that are far superior to almost anything sold in American stores.

One reason for this is the short ingredient list. In its most basic form, Northern Mexican tortillas are made from flour, water, fat, and salt. You’ll never find spinach tortillas or whole wheat tortillas in Northern Mexico because these ingredients distract from the essential flavors of the flour and fat. Even so, there are some small but important differences in the way cooks prepare them. For example, my mother's family uses milk for extra richness and, thanks to milk proteins and sugars, to help the tortillas brown better as they cook. They also use a touch of sugar for a balanced sweetness since lard—the traditional fat used in flour tortillas—is very savory. Other tortilla-makers, however, will just use water and omit sugar.

How We Tested This Recipe

For this recipe, I tested 15 different versions of the dough, searching for a balance of tradition and flavor. I tried swapping out lard for butter, but it produced tortillas with too strong of a dairy flavor; I mixed in a little bit of whole wheat flour, but, while tasty and a dream to roll out, the tortillas had a flavor that was too far from what I've come to expect; I tried making the tortillas with actual white Sonoran all-purpose flour made by Hayden Mills, which was the most delicious and had a beautiful golden hue, but requires a special order; and then I experimented with different ratios of liquid to dry ingredients.

I also tried different sizes of tortillas (flour tortillas in Mexico are typically smaller than the gigantic American versions), ranging from six to eight inches, to find one that I thought was best for a wide range of applications. That said, you can make your own tortillas larger or smaller, as desired.

In her book, The Cuisines of Mexico, Diana Kennedy describes observing fresh flour tortillas being made at a restaurant in Hermosillo. It’s a peek into how some households still make their flour tortillas in Mexico, including techniques I use in my recipe below. Here is an excerpt:

“They rolled the dough into 2-inch (5-cm) balls and let them sit a while. To make the tortilla, they rolled and stretched the dough until it was translucent...Then they cooked it on a comal over a hot wood fire. After a few seconds it ballooned up and had to be flattened back onto the comal. They flipped it over, just a few seconds more, and then stacked it on top of the others, wrapped up in a cloth to keep them moist and warm. The recipe they gave me was “a handful of lard to a kilo of flour, salt, and water. Hot water if the weather was cold; cold water if the weather was hot.”

What I landed on was something similar to Kennedy’s findings and my mother's family recipe. You don't need a comal or a live fire to make my tortillas (though I hope to write that recipe one day); all you need is a cast iron skillet and your stovetop burner.

As for the dough itself, my recipe calls for lard as the fat component. While it is sometimes swapped out with Crisco or vegetable shortening, lard delivers a subtle but important animal flavor to the tortillas. In addition to the all-purpose flour in the dough, I add a touch of baking powder for tortillas that are light and airy. I also add a little sugar—not much—for just a bit of sweetness to counter the deep savory notes of the lard.

Rolling out the dough is perhaps the trickiest part of this recipe, but with patience and practice you'll get better. It’s important to keep rotating the dough after each roll to ensure an even circular shape. It's equally important to flip the dough and lightly flour it every several turns or so to keep it from sticking to the work surface.

It’s also imperative to roll to just before the edge of the dough and not completely past it; this helps keep the shape even as well. I like to cook the tortillas one by one as they are rolled out for efficiency, but you can roll them all out first and then cook them after that.

Cooking the tortillas is quick and easy: You just need to maintain a balanced heat that is strong enough to lightly blister and brown the tortillas in spots but won't char or burn them. As soon as each tortilla is cooked, transfer it to a wrapper—a cloth towel, tortilla holder, plastic wrap–lined platter, or zipper-lock bag—to keep it from drying out and becoming brittle.

The tortillas are best when made and consumed fresh. 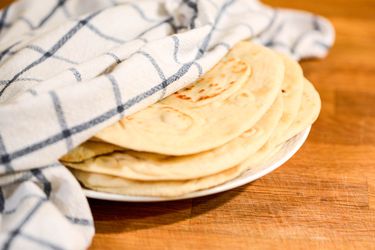 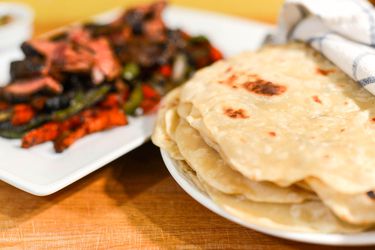 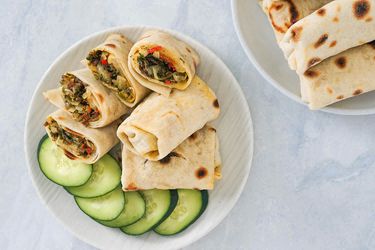 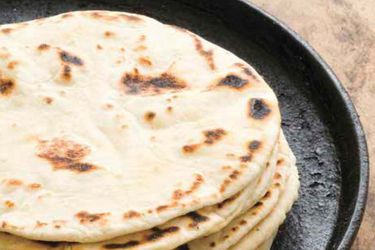 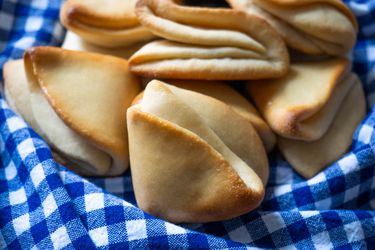