There comes a point in every workaholic's life that you realize that you might just be overdoing it. When both your investors and your haggard crew are pushing you to go home, it might be time to call it a night. The other day, my chef grabbed me while we were closing the kitchen.

Chef: Boss. You need to go home, we got the rest of this covered. Me: I'm good, don't worry about it. Chef: Your left eye is half shut. Me: No really, I'm fine. Chef: I'm pretty sure it's not supposed to be twitching like that. Me: You have a point there.

The first week of operating your own restaurant is just like the first week of having your first child: you don't sleep very much, you're fairly confident you're the worst parent in the world, and the crying never ever stops. Here's a review of my first week in business.

This Cup is Already Broken

Ajahn Chah, the legendary Buddhist ascetic, taught that everything we love eventually breaks and, by accepting this truth, every moment becomes precious. In particular, he talked about his favorite glass and how much pleasure it brought him, while knowing it could break at any minute.

I'd like to say this little piece of dharma offered some zen and solace to me but, all due respects to Ajahn, no tranquility is to be had here at the Swine.

In life, things break. In restaurant life, shit breaks all the goddamn time. As you may recall from my grand opening, I had equipment breaking from day one.

On our first day, my roof leaked, one of my smokers died, the connector to the outdoor string lights got fried in the rain, the gears to my sausage stuffer snapped, and the point-of-sale system decided to freeze while I had a long-ass line.

On our second day in business, one of my waffle irons decide to die right in the middle of service. When two thirds of your sides menu involves things shaped like a waffle, this becomes a critical concern. If kitchen equipment manufacturers ever got into the business of making semi-automatic weapons, gun violence in this country would decline by 85%.

The Department of Health (DOH) will crucify a restaurant that holds cold food above 40°F or hot food below 140°F. So what happened to me? Both my heating boxes, my low-boy refrigerator, and my brand new walk-in refrigerator decided to check out on my very first week. This is all brand new equipment! And if a health inspector decides to show up, she can shut me down on the spot.

I wonder if hospitality management courses teach you what to do when your fridge, which holds all your food and beer, kicks the bucket. In my case, that involved rushing to my local dry ice manufacturer and shoveling over 400 pounds of the stuff into the walk-in to bring the temperature down to 35°.

The Reviews Are In!

I figured reviews would come soon, but I wasn't planning on them during my first week. Yet both Eater and the Village Voice stopped in and gave us positive write-ups. It's interesting—now that the restaurant is actually up and running, I find I'm less invested in reviews than I used to be.

Maybe I'm too exhausted to care or too busy keeping my head above water to be bothered by what critics say. At this point in the game, we're still improving; we've come a long way, but we still have far to go. Yet the barbecue we're cooking right now is far superior to what we served on opening night, and the kitchen is developing its rhythm, which means food comes out better and faster. A longtime guest of my summer pop-up series last summer tells me I'm cooking at a completely different level. By this time next year we won't just be better; we'll hopefully be one of the top whole hog joints in the country.

The reviews point to our past. I'm looking to our future.

Of course I read them, and I'm thankful for their kind words and gracious approach. Folks like Robert Sietsema don't dole out compliments easily.

But I've been completely—and happily—avoiding Yelp. In fact, there seem to be two Arrogant Swine Yelp pages. But I'd rather gouge out my eyes with a rusty fork than read what people have to say there. My buddy Billy Durney, who owns Hometown Barbecue in Red Hook, told me the other day that he finally read some Yelp comments...one year after being in business.

"So what did you think?" I asked. Billy replied, "I'm not looking at Yelp again for another year."

It doesn't matter. In five months I'll probably get a call from a sales rep who promises that, for $300 a month, all my negative reviews will be magically shoved to the bottom of my Yelp page. And I'm going to pay it, because it's just one more cost of doing business. My predecessors in the restaurant business had to pay protection money to the mafia. I'll pay Yelp.

When you run your own restaurant, time blows by. Every day blends into every other, a whirlwind of issues with equipment, staff, utilities, vendors, etc. Every day I'd like to do something new, move to that next step, but something usually pops up to keep me from doing so.

For instance, I've wanted to add cool new stuff to the menu—until I catch someone stealing beer from the walk-in. I'd love a nice quiet morning to write a semi-intelligible piece for my friends at Serious Eats, but lo and behold, my compressor starts stripping thanks to an incompetently wired thermostat. Let me square away this lovely training manual for my employees so they'll be able to articulate the various beers we have on tap! Nope, my new pit guy tells me we're out of wood for tomorrow evening's cook. Jane Doe is scheduled for tonight, where is she? Oh: jail. Again.

As I write this article, three weeks in, we're still on a treadmill—keeping up but not really moving forward. And on days where there's no drama, I'm too beat to work on the next-level stuff.

Back in my corporate days, my best work day was Saturday. I was out of the office. No phone calls, no meetings, no HR issues with staff, no client complaints. Just me, a spreadsheet, a cigar, and a legal pad. But at the Swine, there's always something to plug up the creative river. I'm due a day off some time in the next few months.

The plus side of speeding time is it means we're doing something right. I don't count the minutes until I can go home. I don't doodle on my notepad in meetings where people discuss nothing new. I'll gladly take the frustration and panic attacks, the missing contractors, insurance complications, and 19-hour work days, over having to sit through one more mind-numbing PowerPoint presentation about corporate software.

Here's some good news about the end of the our first week: we finally finished setting up the kitchen. This is why it took so long.

For the past 80 years, our space sat as a warehouse. It support trucks and pallet upon pallet of inventory. In order for the floor to support all that weight, it couldn't have a basement.

There are pros and cons to a restaurant moving into a space without a basement. On the plus side, we don't need to worry about rats as much as other restaurants, which is fortunate, as New York City budgets less money to pest control (about $600,000) than it does to putting on free Shakespeare in Central Park ($1.1 M).

But on the downside, we have very little storage space, and some of that space—shelving, keg stands, and the like—wasn't even built up until our second week. As I write this, we're still building out more storage capacity.

Why's this taking so long? The same reason we had to hire staff on opening day: Uncle Ho didn't have the funds. But with the grand opening one week behind us, we finally had some cash to buy new toys.

The first purchase was sausage-making equipment. Reviewers raved about our homemade sausage rings, which we smoke in the pits, so more people started ordering them. When we first opened, we had a five-pound capacity sausage stuffer and a Kitchenaid mixer I've had since college with a plastic attachment to grind meat. We burned through two mixers before finally calling it quits and ordering a 15-pound capacity stuffer and $3,000 Hobart mixer capable of grinding meat and shredding cheese, cabbage, and other ingredients that greatly reduced our prep time.

All the time now, people marvel at how young the Swine really is. They taste the food, see the full bar, and say "no way this is just a week old!" It feels so natural, they say, not at all like a haggard restaurant flying by the seat of its pants, desperately hoping to make a place for itself in the neighborhood.

When I do stop and take a break, I can appreciate the place for what it is. The room wraps around you like your favorite worn sweater. Guests aren't marveling at the food's ingenuity; they're appreciating its familiarity.

What people are seeing—that familiar timeless feeling—is the Carolina pig picking. It's an expression of a deep desire to spend time with people we care about at a large, casual feast. That's not accidental; from the beginning I set out not to build some precious jewel box, but rather a gathering place for friends and family.

Exactly one week after our grand opening, I was working an event in Long Island City for the non-profit charity Coalition 4 Queens at their annual fundraiser bash. I left the event early to make sure things were going okay at the restaurant. While we were packing up, a torrential storm started to pour down on us. Well, I said, I guess this means the Swine will be dead.

We pulled up to the front gate and heard the laughter of a packed house. Not one seat was available. People were standing by the bar, eating and drinking, smiles all around.

It's easy to get lost in the chaos, to feel helpless, to believe that you're not getting anywhere. But standing among my guests, who braved the drenching storm to spend time in an obscure bar at the edge of industrial Bushwick and hearing them have a great time, I paused and realized that we built something here, and it's something special. 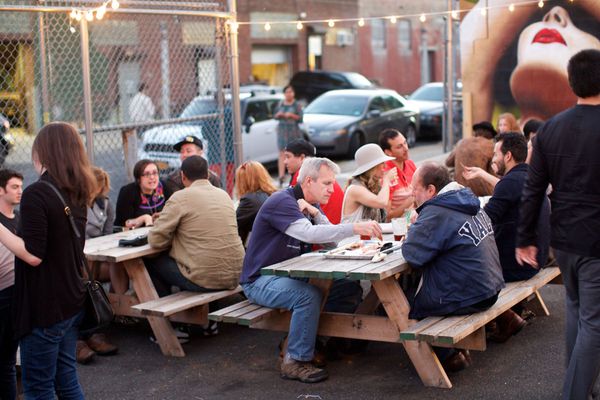 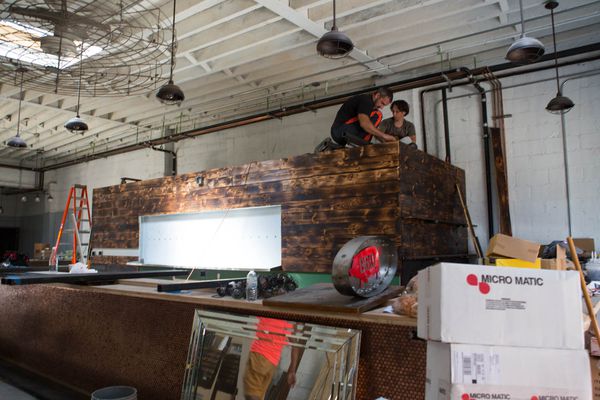 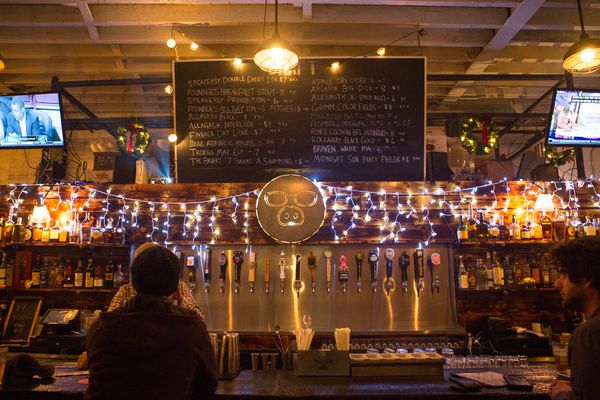 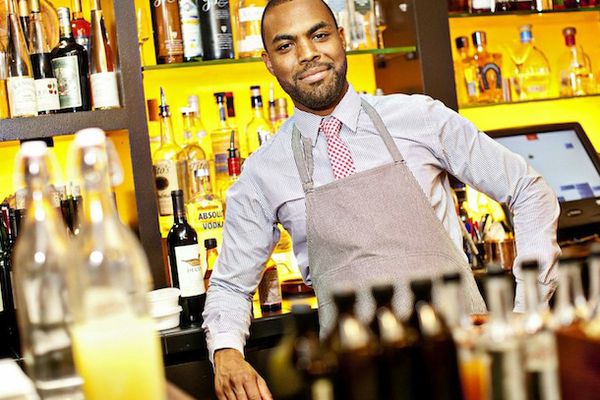 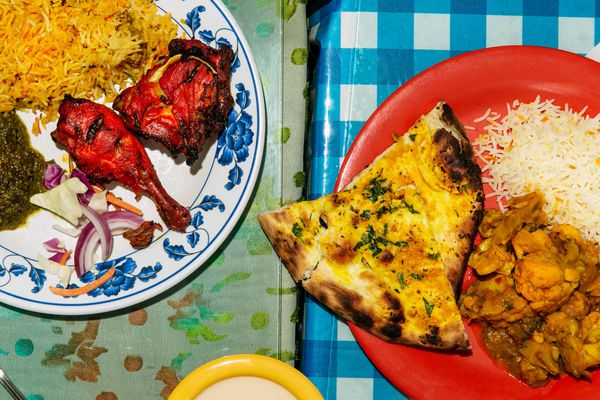