Wednesday, about 5 p.m., Ed Levine here in the Slice–Serious Eats office was like, "So, who's going to Co. with me to shoot the tasting?"

"I told everybody about it. In the group chat on IM."

Long story short, I volunteered myself to trail Ed to some sort of preopening oven test and tasting at Jim Lahey's upcoming pizzeria on Ninth Avenue and 24th Street. (Lahey and company have a target opening date of December 2, but, Lahey says, "Realistically, it's more like December 5 or 9.")

We arrived, and it turned out Ed had scored some sort of super invite, because it appeared to be a tasting primarily for Lahey's investor, Phil Suarez. I felt like I had crashed an intimate gathering, but the company was welcoming, and pretty soon everyone was concentrating on the food coming from the kitchen, anyway.

And, yes, that's a Raytek infrared gun-style thermometer on the make table.

The first pie to come out of the oven Wednesday night was what Lahey called the Domenico. On my subsequent visit Friday afternoon, he had shortened it simply to "The Dom." It's an homage to, you guessed it, Dom DeMarco of Di Fara.

Before rabid Di Fara-heads pile on, let me say that this pie is an homage to Dom. Not a straight-up attempt at cloning. As such, it was pretty much a Margherita pie with some added tang from the pecorino. Another difference between it and the Margherita was that it was a little more cheese-heavy than the Marg.

Here's Wednesday night's Margherita pie. I didn't get an upskirt of this one, but hold your breath a bit while you scroll, because I've got a crust reveal of one of the Friday afternoon Margs below, taken after watching Lahey build about three pies with varying sauce and cheese ratios. Here's a step-by-step of a Margherita build-up:

Stretching the dough—an obvious first step. After which Lahey flours the pizza peel and then sprinkles on a bit of salt with the flour, something I'd never seen any other pizzaiolo do.

Saucing the dough. The sauce layer was pretty sparse on this first one, but he was experimenting with different amounts of the red stuff to find the right balance.

Lahey adds the cheese. They're using buffalo mozzarella, sourced from Italy, but they haven't settled on one particular source yet.

And, of course, basil makes the Margherita complete.

Here's one of those bad boys about 10 seconds out of the oven.

I promised it, and now I deliver: There's the upskirt on that bad boy.

When Lahey brought this one out of the kitchen on Wednesday, he called this one the "boscaiolo," Italian for forester or hunter. It's a pie made from things a forester might pick up while out in the woods. As served, this one had mushrooms, sausage, and onion. Which just happens to be very near my favorite combo (sausage and onion).

Other Pies Not Pictured

There was a pie Lahey's calling the Ham and Cheese—topped with fontina and then prosciutto thrown on immediately after the pie comes out of the oven, which serves to warm the meat just enough. We sampled two versions on Wednesday, the more interesting one with a few caraway seeds scattered on the dough to give it some aromatic pop while eating. I hope the caraway version shows up on the menu rather than the noncaraway version.

On Friday, I watched an experimental pie being born. It was awesome (can you say Kentucky bacon?) and would probably have purists scratching their heads, but it really worked. Unfortunately, Lahey went off record with this one, so I cannot tell you more than bacon! at this time.

In addition to pizza, the menu will also feature "toasts." If you want to get all Italiano, you could call them bruschetta. This pinto bean toast was my favorite (we also tasted a tomato-topped toast, but as tomatoes aren't in season, it may not find its way on to the menu come opening day). Flavored with pepperoncini, it has a subtle heat that cuts the slight sweetness of the beans. Lahey adds the slightest bit of anchovy to the mix to give it some salt—but fear not, anchovy haters, you'd never know the little fish had any part in this bruschetta.

And of course the base is from Sullivan Street Bakery, so you're already starting with some of the best bread in the city.

Yeah, Yeah, Pretty Pictures. But How Did It Taste?

The pies on Wednesday night were amazing. Lahey is a bread genius, and as the crust is the hardest part of pizza to perfect, we're already in good hands. The hole structure was beautiful, giving the end crust a crisp, chewy puffiness that would compel even crust-haters to finish an entire slice. There was ample flavor here, thanks to a dough that was left to rise 24 hours, developing a yeasty tang. The crust was crisp and chewy, but did not suffer from overchewiness. You know how some pizza crusts are too chewy and give you a jaw ache? Not happening here. There was minimal tip sag on any of these pies.

Friday's pies were made using a younger dough, so the flavor wasn't as assertive, but they were just short of pizza perfection and would still blow away many of the best pies you've had.

One of my favorites was the Hunter, which featured the same pepperoncino used in the pinto-bean toast, giving it a little bit of a kick that started slow but never overwhelmed the other flavors in the mix. In fact, Lahey said on Friday, much of the menu will make use of the chiles to greater or lesser extent.

I liked the Dom for its use of the salty, tangy pecorino and would probably opt for that over the Margherita.

The nice thing, though, is that the pies are small—about 12 inches in diameter—so if you go with a group of three or four people, you can order different pizzas and share, easily getting a taste of many of the pies.

The menu is not yet set, though it seemed pretty certain that the Dom, the Hunter, the Margherita, and the Popeye would be on it, along with a basic Marinara pie.

Compared to pizzas of similar size and style, I'd say Lahey's making a pie that's more Franny's than Una Pizza Napoletana, but it's easily in that league of awesome. There's more crispness to the crust than you'll find at UPN, but the pizzas seem less fussy than those at Franny's.

My prediction is that the place will be packed. Good thing that it's only a couple blocks from the Slice–Serious Eats office, so I can get there early.

The dining room is all clean lines and warm wood. Though minimalist and spare, it has a welcoming feeling. There are 54 seats.

There are two communal tables with 12 seats each and a banquette of two-tops flanked by two round six-top tables.

The bar. It's got a marble top and, at the time of this photo, one tap for beer. There's an espresso machine on the back bar.

This rabbit lamp sits in the windowsill of the kitchen, for now. "We found it in the basement," Lahey said. "It's the only thing we kept from what was in here before. I guess we should give it a name."

The expediter's view into the dining room.

Txikito, two doors up Grand Sichuan International, across the street 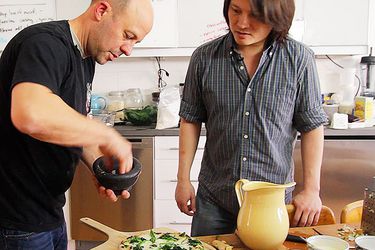 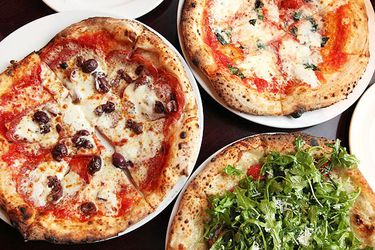 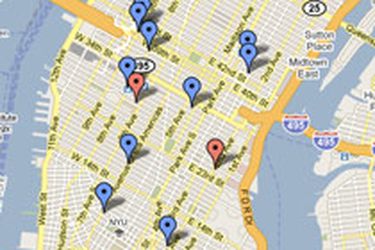