If you love starchy and sweet fava beans, but hate the fussy two-step shelling process, try making them into a peel-and-eat snack—just broil them in their pods, then sprinkle with a flavorful dill seasoning salt.

When fava beans arrive for their brief stint at the market, they really make an impression. These high-maintenance vegetables require a double dose of prep—the beans are first shucked from their fuzzy pods, and then each bean is peeled of its tough outer skin. Sure, if the beans are small enough, you can dig right in, but to fully appreciate a fava’s creamy and starchy texture, you’ve gotta be devoted.

Fava beans are probably one of my favorite vegetables, which is why I’m not allowed in the kitchen if they’re being prepped: I have a habit of eating every other one I peel, so my yield is always suspiciously low. My husband, on the other hand, has true restraint, and can whittle two pounds of pods down to two cups of peeled beans, just to make the springy-est scrambled eggs.

I can’t say I’m as dedicated to the fava cause, as I take a more casual approach. I instead broil or grill them whole, still in their thick jackets. This chars the exteriors, adding smoky flavor, while the beans inside steam, growing sweet and tender.

I then toss them with an herb salt, which seasons my fingers, so I can simply peel and eat. It's the perfect snack with a glass of wine on an idle evening, or served alongside other handsy dishes, like crab, shell-on shrimp, or even fried chicken.

I start with washed whole fava beans trimmed of their tops, which makes it easier to unzip the pods after cooking, and toss them with olive oil to promote even browning. I don’t season them with any salt at this point because I’ll be showering on an herbed salt later on.

For a bonus aromatic hit, I lay a few sprigs of rosemary across the sheet tray before spreading the fava beans on top, but any hearty herb, such as oregano, thyme, or sage, will work as well. The beans go for a quick trip under the broiler or on the grill, just until they become lightly charred.

While the beans are blistering under the heat, I pulse together kosher salt, dried dill, garlic powder, and onion powder until the dried dill is broken up and the kosher salt is fine. I make the seasoning with dry ingredients only, which easily grind into a fine powder that better adheres to the pods and to your fingers, so you season the beans as you peel.

I allow the pods to sit just a moment before diving in, so the beans inside have a chance to steam and cook fully. I then shower on the seasoning, leaving extra salt on the side to dip each bean into. It’s both a springtime activity and a snack—perfect for movie nights in place of popcorn, or just a way to keep the kids busy on a Sunday afternoon. 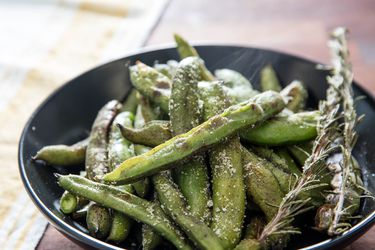 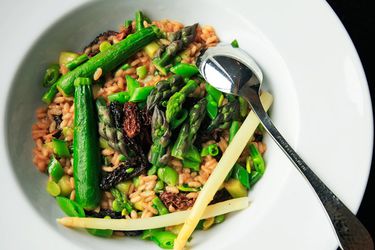