Onion rings don't engender the same kind of fervor, perhaps, as fries. That's to be expected, I suppose, since there's an awful lot of folks who just flat-out don't like onions, no matter how crisp the coating or how exquisite the fry job. It makes sense, then, that onion rings are harder to find. Fries are universal; if you want a pouch of potato sticks, you can visit pretty much any fast food establishment on the planet (certainly any that slings burgers). But if it's lunchtime and you want to put a ring on it, you've got to plot out your run a bit more carefully; Mickey D's and Wendy's—the #1 and #2 chains in the biz—simply can't help you, and the revered In-N-Out and Five Guys of the world won't cut it, either.

So if onion rings are a more exclusive menu item, appealing to a narrower, more discerning audience, isn't it even more important to get the very best? Most of us will mindlessly gnaw away at the sleeve of tater twigs in front of us, even if they're not our fave. But a righteous ring is worth going out of your way for. I'd even argue that the ring's the thing that decides many a burger destination.

I ordered onion rings from the Big Four fast-food outlets that offer them: Burger King, Hardee's (or Carl's Jr., depending on geography), Sonic, and Jack in the Box. I obtained two orders from each restaurant and judged each chain's rings on a separate occasion (simply to avoid onion overload). Just as I did with fries, I came up with four categories on which to grade each chain's rings. For each, I looked at size, structure, onion flavor, and coating flavor.

There's a lot to like about Sonic, but I'm not sure the onion rings should count as one of them. While my food runner hurried them out to me, complete with a Starlight mint in the bag and warm "Enjoy your meal" wishes, these rings were the greasiest of the lot. There was a visible trickle of grease inside the wax-paper sleeve and a puddle on the mat I used for the photo shoot. The onion itself had nice flavor, but that may have been just the only thing that rose above the greasiness. I had to stop eating after three or four of these rings. Thankfully, a jumbo cherry limeade can wash away a lot of yuck.

Size: Sonic's Medium is a hefty 156 grams. (They also offer a 227 gram Large!) I found 11 rings per medium order, at a cost of $1.69. The smallest ring was 1.5 inches; the largest was not quite 3 inches across. 3/5
Structure: The fine crumb coating flaked away in chunks on many rings. Lots of misshapen rings, the most broken pieces of all the chains I tested. 2/10
Onion flavor: The onions themselves were noticeably sweet, a welcome positive in an otherwise unpleasant ring experience. 4/5
Coating flavor: Hard to say much about the seasoning; it was drowning in grease. Heavy-duty napkin work required after every bite. I actually went through more napkins than onion rings. 2/10
Total score: 11/30

Jack in the Box

I'll admit to a certain soft spot for Jack in the Box. The chain doesn't exist in my home state of Georgia, so my only exposure is when I travel. In a classic case of "the grass is always greener," I assume that everything on their menu must be automatically superior to what I can get at home.

At least that's what I used to think before this little experiment. Jack's rings looked great, but were ultimately blah and bland. They weren't noticeably salty...nor noticeably greasy...or oniony...or anything else, for that matter. I lost interest a few rings in and had forgotten about them entirely just a few exit ramps down the highway.

Size: The only serving size Jack sells is 119 grams. That's made up of 9 rings per order. They measured between 1.125 and 3.5 inches, both the smallest and biggest rings of the test. I was charged $1.89 per order, the most expensive rings of all. 5/5
Structure: Jack's rings have an almost-cakey crumb coating that was lighter in color than the others. The batter underneath had split open on several rings. Quite a few conjoined rings, too. 5/10
Onion flavor: I know there was onion in there. I saw it. I have pictures of it. But it made no impression on me as I weaved in and out of tractor trailer traffic on I-75. 2/5
Coating flavor: Meh. Nothing special at all about that outer layer. Would have benefitted heavily from a liberal sprinkling of salt. 5/10
Total score: 17/30

The chain makes no bones about going after "young, hungry guys." While a half-naked Kate Upton sells their burgers, Hardee's uses the second-oldest trick in the book to lure dudes to their rings. I was astonished to see the chain touting "Beer-Battered Onion Rings," but assumed that there had to be a big fat asterisk in there somewhere. Certainly no national fast-food giant could get away with actually using real beer in a menu item that just anybody can walk in and purchase, right? But there it was, the #2 ingredient listed: BEER, second only to ONIONS. The batter had no discernible boozy taste, though.

Size: Only one serving size offered (122 grams). Each order contained 8 or 9 rings for $1.79. All measured between 2 and 3.25 inches in diameter, putting them at the higher end of the size spectrum. 4/5
Structure: The only ring of the four to use batter alone with no crumb coating. A few stray broken pieces, but mostly structurally sound. The onion had a clean bite. 7/10
Onion flavor: I had a tough time picking out any onion flavor at all; it was hopelessly buried under the beer batter. 1/5
Coating flavor: Thick with an almost doughy texture, it was more sweet than salty. Reminded me of state fair food. They tasted like rings of fried batter. 6/10
Total score: 18/30

Three chains in, I remembered why I'm more of a fry guy than a ring king. I tend to lose interest before I finish an order of onion rings. There's often a bland monotony that takes over; I had yet to finish a single order from any of the chains I visited.

Burger King may have figured out the secret, though. Upon bagging, I was asked what kind of sauce I wanted: buffalo, BBQ, ranch, sweet and sour, honey mustard, or "zesty" (kind of a horseradish mix). Well, well, well... Taken aback, the native Hoosier in me came out as I instinctively requested ranch. (We're prone to putting it on everything.) Between it and a rogue zesty packet I also ended up with, I devoured both orders. BK totally impressed me with their revamped spuds in our previous side showdown, but I may pause next time someone in the kingdom asks if I want fries with that.

Size: BK offers a full range of serving sizes, from Value to Small to Medium to Large. The Medium (the closest to the other sampling sizes) weighed in at 117 grams and cost $1.69. There were 12 to 14 rings per order, but every single one was less than 2 inches across. Undersized, perhaps, so they can use them as a burger topping—where they don't hold up nearly as well. 3/5
Structure: Fine crumb coating nearly resembling panko. Most were more oval than round. Only one broken and only one set of conjoined rings, though. 8/10
Onion flavor: More oniony than I expected, the slices even had a slight crunch under that shell. 4/5
Coating flavor: Noticeable saltiness (that's a good thing) and crispness. Call it cheating, but BK was the only place to blatantly push dipping sauces, and it made all the difference in the world. About the time I started to tire of the plain rings, I cracked open my ranch, and it was like starting over fresh. Extra credit awarded for the dippers... but truthfully, BK's rings would have eked out the win even sans sauces. 9/10
Total score: 24/30

Don't get me wrong; I won't be giving up fries anytime soon. But at least I now know where I might consider onion rings a legitimate alternative. 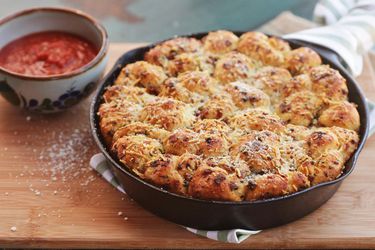