Larry Olmsted has spent the past four years researching fraudulence in food labeling for his recently released book, Real Food/Fake Food: Why You Don't Know What You're Eating and What You Can Do About It. It's a journey that took him to Japan, Alaska, Chile, Argentina, Scotland, Ireland, Italy, France, Spain, Portugal, South Africa, and all across the United States and Canada. Today, he joins us to talk about one of the most consistently mislabeled foods in the American restaurant industry: wagyu beef.

For golfers, there is St Andrews; for divers, Palau; and for skiers, the Holy Grail is Hokkaido, Japan's northernmost island—the "powder capital of the world." More than 20 resorts ring the island, which sits smack in the middle of the so-called Siberian Express, sort of a frigid version of our Gulf Stream. While this makes for excellent skiing, with more than 50 feet of deep, dry powder possible each season, it would not appear to be ideal for raising cattle. Appearances, however, can be deceiving. Just ask Fujio Terauchi, "The Wagyu Meister," sole producer of Hokkaido Snow Beef, the rarest regional variant of Japanese wagyu.

Wagyu translates to "Japanese cow," and generally refers to four Japanese breeds: brown, polled, shorthorn, and black. Like wine appellations, the most prized wagyu are raised in accordance with regional rules; the consensus is that the best—including Kobe and Hokkaido Snow Beef—come from strains of the black variety. Many of the stories you've likely heard about wagyu are appealing myths: While farmers are allowed to spoil their herds, few massage cattle, feed them beer or sake, or play them classical music. Wagyu are penned like American feedlot cattle, but, unlike much of our beef, they are antibiotic-, hormone-, steroid-, and animal byproduct–free, and all of their feed must be grown locally.

The level of intramuscular fat dispersion in premium wagyu puts all other notions of "marbling" to shame. The fat is a spiderweb of tiny lines and dots, often described as filigree, so evenly mixed with red meat that the overall result appears creamy pink. The ratio of fat to meat is high, and it's consistent in each bite, closer to a pat of butter than your standard steak. The flavor is very beefy, but at the same time, each bite is meltingly tender and fatty, in a velvety rather than greasy way.

In Japan, marbling is graded on a 12-point scale, and Kobe usually scores 10 or higher. Other Japanese wagyu varies more, but can still reach the top end of the range and boast similarly impressive numbers. While Kobe's cachet is well earned, the experience of eating any top-tier Japanese wagyu (scoring, say, 10 to 12) is much the same. In comparison, most American-raised wagyu or hybrids would score between six and nine, while the USDA's highest grade, Prime, rings in at around four.

"The unsaturated fats in wagyu have a low melting point, below 98.6°F, so they literally melt on your tongue, coating taste buds."

What really makes the best wagyu special is genetics—while most beef cattle are crossbred for generations, these are the purest of pure bloodlines. For Kobe, every single relative on both sides, going back centuries, must have been born in Hyogo Prefecture. This genetic fixation is all about fat, which is much better dispersed, but also better, period: It's significantly higher in healthier unsaturated fatty acids, including oleic acid, which researchers have found to be responsible for what diners describe as the "melts-in-your-mouth" sensation. The unsaturated fats in wagyu have a low melting point, below 98.6°F, so they literally melt on your tongue, coating taste buds.

Fujio Terauchi raises purebred Kuroge black wagyu on a diet heavy on the island's famously super-sweet corn. The bitter climate encourages a thicker coat and different fat dispersion, with slightly less internal marbling and more exterior fat cap. "It is still very highly marbled, but it's milder than Kobe," so rich some diners find it too fatty, says Devin Hashimoto, executive chef at Mizumi, a fine-dining restaurant in the Wynn Las Vegas resort. "Because it is so cold [where the cows are raised], and because of the corn, you get this uniquely sweet taste. He has devoted his entire life to raising them." Ultra-rich, wagyu is always served in small quantities, because after a few bites, it tends to overwhelm the palate. Snow Beef is similarly rich, but just a touch mellower—you can enjoy a few more bites than you can of Kobe or its peers.

Snow Beef is so rare, you cannot even get it on the main island, Honshu. Until last year, you needed to visit Hokkaido, or one restaurant in Singapore, to try it. Outside of its island birthplace, just four restaurants in the world serve it, and three of them, including Mizumi, are in the United States. Hashimoto says he even gets guests from Tokyo who are excited to try it for the first time in Vegas. Snow Beef may be the rarest, but it is now possible to try many famous regional variants of Japanese beef on these shores, including Ohmi, Miyazaki, Matsuzaka, and, of course, Kobe. Most experts agree that at the high end of quality, they are virtually indistinguishable, but Kobe reaches the high end more consistently. However, only the best grades of wagyu (A4 and A5, on a five-point scale that rates marbling along with with three other attributes) are exported to the US, so the variety you try is not much of an issue. This is a sea change for red-meat devotees, and a very recent one—there has never been a better time to enjoy the world's most prized beef. Then again, there has also never been a worse time.

That's because Kobe beef, as the only regional wagyu widely recognized and valued by American consumers, is the most widely counterfeited food in our country. Likewise, menus boasting the word "wagyu" rarely guarantee that the meat is actually from Japan. While up to 80% of extra-virgin olive oil sold in America has been found to be fake (according to the University of California, Davis Olive Center and 60 Minutes), and more than 80% of the red snapper sold at both retail stores and in restaurants is neither red nor snapper of any kind (according to several studies by Oceana), almost every single ounce of Kobe beef in the US is a scam—more than 99%. In fact, for most of the 21st century, you have had a better chance of winning Megabucks or being elected president than of eating Kobe—or any Japanese-raised beef—in this country.

While few diners know it, the importation of any beef from Japan was categorically, completely, and unconditionally banned by the USDA for most of recent history, due to bovine spongiform encephalopathy (BSE), more commonly known as mad cow disease. Prior to the 2001 ban, only a handful of expensive specialty Japanese eateries and the highest-end steakhouses imported Kobe, and, since it was the only famous Japanese regional beef, few bothered with other wagyu. The ban was lifted less than four years ago, ushering in a new era of possibility for beef lovers. The problem happened in the years in between, when lack of competition from the real thing opened the floodgates for restaurants of every ilk to suddenly advertise "Kobe" and bogus "wagyu." What had been a $300-per-steak delicacy became Kobe sliders at neighborhood taverns, Kobe hot dogs at the BurgerFi chain, Kobe pastrami on rye at Balducci's, and $50 Kobe burgers at countless celebrity-chef restaurants. Except not one ounce of it was Kobe.

Today, we again have the real thing, but very little of it. You can literally count on your fingers the restaurants that serve real Kobe beef in this country, and none is sold at retail, ever. The sticky issue is what the substitute is. Meat labeled Kobe is occasionally other premium Japanese wagyu, but more often than not, it's something much less valuable. Sometimes it's beef sourced from domestic purebred cattle of Japanese origins, sometimes it's from Australian hybrids, and other times it's from "wangus," a popular domestic commercial hybrid of Japanese-descended wagyu and our Angus. That's all best-case. It can also be regular old supermarket beef, and, when you see Kobe sliders or burgers, it often is. But, just as premium sparkling wines from elsewhere usually fail to equal Champagne in taste tests, most experts agree that even the best purebred domestic wagyu falls short of the Japanese version—and it's rare to get the best domestic version as a substitute.

There is so little Kobe imported that restaurants and distributors are licensed by Japan's Kobe Beef Marketing & Distribution Promotion Association, and Inside Edition reported last month that our supply has "grown" to the point that there are now eight restaurants in the entire US serving real Kobe beef. When the reporters confronted the owner of Le Bernardin, the world-famous, three-Michelin-star New York institution, about the use of "Kobe" on its menu, the restaurant, to its credit, conceded the mistake and changed the wording. Le Bernardin did, however, serve real imported Japanese wagyu of high quality. The Kobe scarcity has led beef-loving chefs like Michael Mina and Wolfgang Puck to source top Japanese regional alternatives—Puck gets his from Miyazaki, while Mina visited Japan and set up a direct import deal from Matsuzaka. He says, "It's about giving [diners] an experience. Since they lifted the ban, it's going to give more people the chance to try this great product—people who have never tried it before."

Most Americans, including well-heeled gourmets, have never tried any high-quality Japanese beef—even if they think they have. "When people come from America, I always suggest the Kobe, because I know it is new for them," says Takuya Ozawa, former sous-chef at Tokyo's New York Grill, made famous by the Bill Murray film Lost in Translation. "But I get people here all the time from America who say they have had Kobe beef, and then, 99% of the time, they say they can't understand why it tastes nothing like this at home."

Real wagyu is so different from other types of high-end steak, be it USDA Prime, French Charolais, Scottish Aberdeen Angus, or Italian Chianina, that it might as well come from a different animal altogether. The incredible dispersion of fat is so particular and distinctive in this style of meat that almost anyone could tell real wagyu from the world's other steaks with a glance. Eating real Japanese wagyu is a treat all food lovers owe themselves, and there have never been more opportunities in this country—or more counterfeits. Today, you can have Japanese wagyu in most major cities, and the amazing flavor experience is well worth the trouble, but best served with a healthy dose of caveat emptor. We live in the Golden Age of Japanese Beef, and the Platinum Age of Fake Japanese Beef. 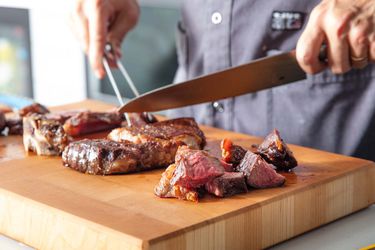 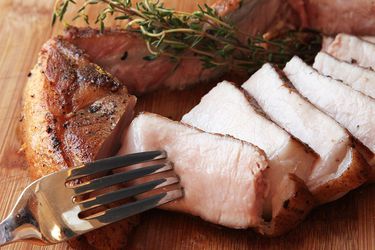