I don't often make the trip way the heck upstate to my sister's place in the Keene Valley, but when I do decide to make the trek, hot dogs figure largely into the math. See, the drive up neatly bisects the heart of the New York-Connecticut-Pennsylvania-Michigan hot dog trail, with several important stops along Route 87. You did know that such a trail exists, right?

There's no question that the Northeastern U.S. is mad about wieners, but etymologically, hot dog culture 'round these parts is a confusing, somewhat incestuous mess. You'll find Michigans—hot dogs topped with spiced meat sauce—in upstate New York, but not in Michigan itself (at least they're not labeled as such). While in Michigan, you'll find Coneys—a similar meat-on-meat creation—though steamed pork and beef dogs with those particular spices are nowhere to be found in Coney Island itself.

The history of these dogs is thus apocryphal, and it's quite possible that the concept arose simultaneously in multiple locations with locals adjusting meat sauce recipes to cater to local tastes. For instance, while warm-spiced, "Greek" style sauce makes appearances all over the hot dog trail, it seems to be particularly concentrated in the Troy/Albany area, where Route 90 meets Route 87. Not only that, but the region has another unique specialty that I've seen nowhere else: mini hot dogs.

According to our resident hot dog expert and Philly correspondent Hawk Krall, the very first mini hot dog stand was "New Way Lunch, opened in 1922 by Greek immigrant Strates Fentekes," who served his mini dogs by lining up a dozen along the length of his arm to be dressed.

The restaurant eventually changed its name to Hot Dog Charlie's, but you'll still find photos and news stories of the famous "Hairy Arm" technique in clippings posted on the walls of its three locations in the area (a fourth was recently closed due to fire).

As restaurants go, it's about as pure a slice of Americana as you can get. My sister and I pulled into the Cohoes location (it's a regional chain) and planted a seat in their outdoor picnic area, where we said hello to the neighboring table and tied up the dogs before heading inside to place our orders. The fist thing you see is a massive dogpile on a the cool side of a well-worn but spotlessly clean flat-top griddle. A young woman picks them up one at a time and arranges them in neat rows to plump up and char slightly, giving their natural casings the decisive snap that marks a good wiener.

Hot Dog Charlie's dogs are from Helmbold's Old World Provisions, a German-style frank and sausage-maker that's been in the area since 1913. They come lightly laced with paprika and a few warm spices, and run at about an ounce and a half per dog. They get stuffed into specially-baked, three-inch soft steamed rolls before being topped by your choice of mustard, ketchup, kraut, cheese sauce, and their Greek sauce.

The Greek, with a squirt of yellow mustard and a spoonful of diced onions underneath, is the way to go, though to be quite honest, the investment in money (we spent less tha $10), calories, and stomach space on these things is so small that you can easily get one of each for a taste-off before filling up for the long drive home. 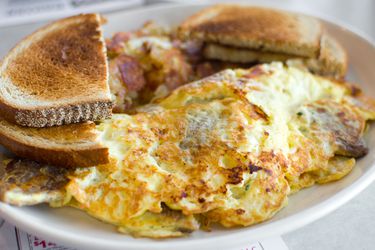 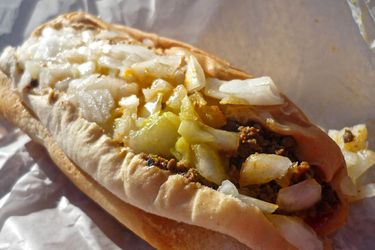