Everyone knows about "goat cheese," a.k.a. "chèvre." It's white, it's crumbly, and it's always showing up on beet salad thanks to northern California cooks in the '80s.

Good fresh goat cheese is a special and important thing. It should be moist and creamy, without a hint of graininess. Its flavor should be clean and fresh, mouthwateringly tangy but not astringent, lemony but also milky and balanced. An unaged cheese has nowhere to hide its faults.

Unfortunately there's a lot of faulty, gluey goat cheese out there, metallic and sour without any nuance. And that stuff, I suspect, is what turns people off goat milk cheese entirely. But there are a lot of goat cheeses out there to try besides chèvre.

In some ways, goat milk cheeses are the opposite of cow milk; the longer they're aged, the more approachable they tend to be. Some goat cheeses are buttery and mellow, with hints of lemon. Firm, aged, and rinded varieties offer flavors of nut skins and cooked milk—much more subtle than younger styles, which are more piquant and goaty; fresh chèvre is actually pretty intense.

What goat cheeses should you seek out beyond the fresh kind? In the spirit of my top 10 introductory cheeses and my survey of 10 essential sheep milk cheeses, here are 10 goat cheeses worth seeking out.

Where it's from: France and Canada
Pasteurized
Aroma: Little to none; unbaked tart crust
Flavor: Sweet cream with a hint of lemon
Texture: Sticky to runny
Character: Easy
Recommended: Chevre D'Argental, Woolwich

French Brie-like cheeses made of goat milk never hail from true Brie country (Île-de-France); instead they tend to be made in the Rhône-Alpes and Poitou-Charentes regions. I have no proof, but my gut tells me that the French seized goat brie as an opportunity to create a buttery, rich cheese made with goat milk for an American audience that's always shied away from the piquant, animal flavors associated with traditional French Loire and Poitou goat cheeses.

Goat brie is even milder than its cow milk inspiration. The rind is remarkably thin, the paste inside like cream, and the flavor sweet and delicate with only the slightest undercurrent of citrus tang that betrays the cheese's goaty origin.

This diminutive ashed round closely resembles one of the classic goat cheeses of France's Loire Valley: Selles-sur-Cher, a pasteurized version of which is available in the States. Unlike its French inspiration, Bonne Bouche (which, by the way, means "good mouthful") has a rind produced exclusively with the yeast geotrichum candidum, known for its sweet, mellow flavor. Unlike Vermont Creamery's other aged goat cheeses, Bonne Bouche also uses ash, hence its foggy grey color.

The geo rind has a corrugated brainy appearance, so the higher ratio of rind to interior cheese means the paste breaks down more quickly, resulting in an oozing, spreadable texture within several weeks. French Loire Valley cheeses are often unaged, sprinkled in ash but essentially fresh goat cheese beneath. With Bonne Bouche, you're guaranteed a developed rind. The cheese can age as long eight weeks out in the market, developing piquant black walnutty flavors, but for the most part it's drippily spreadable with a bare background of lemony tang.

Like its better-known and more traditional Lombardian brother Taleggio, Nababbo is a marvelous gateway to the World of Stink, primarily because it's just not that stinky. I actually consider it to be a double gateway, because it also lacks the citric acidity many unhappily associate with goat milk.

Here, then, is a friendly, doughy taste of pungency's beginning, and the barest whisper of tanginess. Nababbo is all about salt and yeast with a little fruit acid. On the finish you get the soft minerality of many aged goat cheeses; it's a quality that reminds me, pleasantly. of the softness of baby powder. Nababbo is a new innovation, taking traditional cow milk Taleggio as inspiration and turning it into a goat milk block.

Garrotxa has always impressed me because it wins over professed haters of goat cheese. Dense and aged, the expected lemony tang of goat milk softens, leaving impressions of toasted hazelnuts and their skins. The typical moleskin-textured rind of Spanish cheeses is plush and soft, like kitten fur. The interior holds together but is moist and pliable, with the deep aromatics of scrub brush and grasses growing in the foothills of the Pyrénées.

The cheeses has the barest essence of tang, more delicate than cow milk cheese, always balanced and remarkably delicious. Garrotxa is not yet a protected cheese, but I'm told this process is underway. It should always hail from the Catalonia, and is always made of pasteurized milk.

Robin Congden is the inventor of this exquisite flying saucer of a cheese, which is now made in Devon by Debbie Mumford. Milk is bought from a neighboring farm whose goats browse in the pasture and hedgerows. I'm certain this forage contributes to the floral, herbaceous that makes Ticklemore great.

Ticklemore bears the impressions of the plastic molds in which the curd is formed and drained: two halves that meet in a thick seam that creates the distinctive saucer shape. The knobbly white rind is minerally and earthy, the thick creamline beneath both rich and delicate. Expect moist floral flavors and an ice creamy finish.

I'd be lying if I said this was one of my favorite cheeses. I don't tend to go for flavored cheeses in the first place, and wine-washed choices often have a disturbingly grapey quality. Still, I appreciate Queso de Murcia al Vino's ability to coax cheese newbies over to the goat side. More specifically, the most common brand found on the American market, the charming Drunken Goat.

It has a great name and makes people pay attention. A barely firm aged goat cheese, with a smushable, pliant texture, it's made friendlier and fruitier with a washing in one of the red wines Murcia (Jumilla, Yecla, and Bullas). Most importantly, the cheese retains the soft, powdery flavor of goat milk, rather than swamping it entirely with a wine hosedown.

Many a cheese counter suggests that this cheese takes its name from the superior weed grown in Humboldt County, California. That's not actually the case, but the cheese's origins are trippy and wonderful enough that the idea is apt. Cypress Grove founder Mary Keehn dreamt of Humboldt Fog on a 1980s plane ride home from France, imagining it in painstaking detail, from its tall, cakey shape to the wavering line of blue-grey vegetable ash, included as an homage to the French mountain cheese Morbier. Folks new to the cheese think it's blue mold, as in "blue cheese," but the ash is merely decorative, and a daily acknowledgement of the French cheesemaking tradition that so moved one American woman.

Humboldt Fog isn't sticky and silky like Brie, but you look at it and imagine a Brie in Wonderland that swallowed a growth potion. Unlike fresh goat cheese, Humboldt Fog is dusted in vegetable ash and inoculated with P.candidum to develop that edible white skin. Its flavor is saltier and less acidic than Brie, without the animal notes. Instead, you get a flaky cheesecake texture and buttermilk tang with pronounced citrus fruit. The brightness of lemon shining through all that fog.

From Lombardian Taleggio producer Ca De Ambros comes this gelatinous wobble of a blue cheese. Heavy, wet curd collapses instantly when pierced, meaning you may find traces of mold lines, but little if any actual blue or green mold. You might guess it to be a Gorgonzola dolce, but this cheese is all goat milk, and that dairy swap is reflected in the fine, snowy-white paste and the amped-up fermented fruit flavors that a Gorgonzola might not display.

Otherwise, though, you'd struggle to tell the difference. This cheese is first and foremost a textural marvel, silken and squishy in a way that makes you want to grab it by the handful.

Where it's from: France
Pasteurized and Unpasteurized
Aroma: Hay and goat milk
Flavor: Sweet and tart
Texture: Cream leading to velvet
Character: The goat upgrade


Europe inspires me for its large-ish-scale "factory" producers that still prioritize tradition and hand-crafted technique. In this case, Sèvre & Belle Cooperative has the 6th largest production of goat cheese in France, but still hand-ladles all its curd into teeny tiny molds, and works only with fresh goat milk (rather than frozen curd). Based with the department of Poitou-Charentes, in the town of Celles-sur-Belle, they make pasteurized cheeses for the American market, but from the same facility produce raw milk versions of the same cheeses. And the flavor and consistency is remarkably high.

Le Chevrot was a door-opening cheese for me, proving that a mold/yeast-ripened goat cheese could be an entirely different animal from a fresh, lactic, lemony chèvre. It's a beautiful little drum, the color of almond milk, and covered in a wrinkly, brain-like rind that is the calling card of the yeast geotrichum. Accordingly, its flavor is sweet and mellow, with nutty undertones, while the snow-white center of the cheese has a mouthwatering tang.

The combination becomes compulsive, so you keep going back for more, outer rind, inner paste, until the whole eight-ounce round vanishes. The greatest danger is that as the cheese dries out, its brainy ridges deflate and shrink, and it takes on a piquant, potentially soapy edge. But if that's the worst case scenario you're in pretty good shape.

Aged Goudas in general are a revelation for their crunchy, crystalline texture, like some delectable crayon. That plus butterscotch and bourbon flavors makes them practical no-brainers as crowd-pleasing cheeses. Aged goat gouda offers an extra twist, and it's the perfect retort for those who decry goat cheeses.

Goat cheeses made for aging sweeten and mellow with time. Add in Gouda's own personality and you get a smooth, bone-white paste that feels velvety on the tongue. It's luxurious dulce de leche in cheese form, sweet and savory with little protein crystals to nibble on. 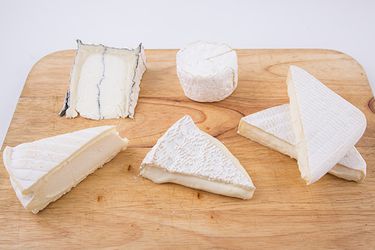