Just about this time last year, Josh Ozersky wrote an article for Time that really got my goat. Titled "For Foodies, Ramps Are the New Arugula," the article was a series of cheap shots at those who value trends more than flavor, picking in particular on ramps, the diminutive wild cousin of leeks.

While admittedly, there has been a rather unnatural craze for ramps in the food media for the last couple of years—much of it blamed on chefs and their ubiquitous use of the vegetable on menus during its brief, one-month harvesting season—I believe this is a good thing. Ramps aren't over-appreciated now, they were vastly underappreciated in the past.

It's not that chefs have just recently been turned on to these wonderful alliums—they've known about them for a long time. In every high end professional kitchen I've worked in since the early 2000s, chefs and line cooks alike would go crazy for them behind the closed swinging doors of the kitchen each spring, trying to figure out ways to turn their customers on to them as well. But in that pre-locavore, pre-modern foodie era, a previously unknown, odd-sounding ingredient that only appears on the menu for a couple weeks of the year, simply wasn't a best-seller.

These days thanks to the spread of seasonally-inspired menus and their ideals, vegetables like these are finally making a splash with the general public, and most chefs couldn't be happier about that. The average diner, who likely had never heard of ramps a couple years ago, is finally learning what chefs have known all along: they taste awesome.

"Mild and sweet, with a unique aroma somewhere between garlic and onions, but with a pronounced funk"

Mild and sweet, with a unique aroma somewhere between garlic and onions, but with a pronounced funk—almost cheese-like in your nose. Unlike scallions or onions which soften and eventually turn mushy when cooked, ramp bulbs retain a pleasant snap, while the lily-like leaves rapidly inflate then collapse when seared in hot butter. I like cooking the leaves until the edges get nice and crisp while the centers remain tender, like wilted spinach.

In Appalachia, where they sprout from the muddy ground in vast numbers during the spring, they're commonly sauteed in bacon fat, cooked into hash, or served alongside fried eggs. This is still my favorite way to eat them, using the runny yolk and browned bacon fat as a sauce for the charred stalks.

They make awesome pickles, providing their own pungent note to the brine. I make a large batch of pickled ramps annually, keeping them in a jar in the fridge. My rule is that I'm not allowed to break into one season's batch until I've got a new batch started from the following season. I just cracked open the 2010s and ate a few of them chopped and sprinkled over a hot dog. Cucumber relish ain't got nothing on'em.

Especially well-suited for Asian cuisines, they make for a mean stir fry or addition to fried rice. Every spring I make a version of mapo tofu, sauteeing chopped ramps with ground beef before adding tofu, chili oil, fermented bean paste, and a sprinkle of Sichuan peppercorns. They add a garlicky, funky dimension that manages to actually improve my favorite dish in the world. That's no small task.

I can hear the skeptics, the Ozerskies, right now: OK, so this guy thinks he loves ramps. He's drunk the Kool-Aid of seasonalvores.

I'd argue, of course, that eating seasonally is actually a refreshing return to water after decades of drinking from the Kool-Aid of perpetually-available-asparagus and middle-of-winter-tomatoes. If you don't like the flavor of ramps, fair enough; We can agree to disagree on that. But what's the point of disliking something—or worse, disliking the type of people who like something—just because it happens to be a food that's only available seasonally?

"What makes ramps ramps is not their flavor, you see, but their cultural value. David Kamp, the author of The Food Snob's Dictionary, offers this explanation to TIME: 'The ramp is not a salad green, but it is a green vegetable, and it is the first legitimately green thing that appears from the ground in April, a month that, in terms of farm yield, is otherwise an extension of winter. For food snobs, therefore, ramps are overcelebrated and overly scrutinized, like the first ballgame played in April, even with 161 more games ahead.'"

Suddenly those who love ramps, seek them out, and have access to them are snobs? Yes, the ramp is not the most democratic of vegetables—far from it. But does enjoying and consuming a delicious vegetable that's only available for a few weeks out of the year in a very small growing region automatically classify one as a snob?

Quite the opposite. I'd say that one who loves food of all types—from the greasiest roadside burger to high end, three-star, $300-a-head fare, from dirty-water Sabrett's hot dogs to white truffles—one who embraces deliciousness in all its forms, whether widely available or exceptionally rare is the very opposite of snobby.

Here's another quote from Ozersky:

"If you take any random greens and pickle them and serve them with soft-shell crabs, or sauté the leaves in butter and put them atop incredible pancetta and artichoke spaghetti, of course it will be good! Ramps are like the foraged-greens version of stone soup."

The argument is that ramps are not special, that they are no better tasting than your average scallion.

Well here's something interesting: While here in the Northeast, ramps are still a relatively expensive item, available mostly in farmers' markets, high end grocery stores (Whole Foods has carried them since last year), and fancy restaurants, in other parts of the world, Appalachia and Quebec in particular, ramps are as ubiquitous and cheap as any other onion during their harvest season (demand from the Northeast has changed this situation to a degree). They literally grow like weeds.

So if our current infatuation with ramps in the Northeast is really just us blindly marveling at the Emperor's new clothes, you would expect that as soon as they become as inexpensive as scallions, that our infatuation with them would falter. But history shows that this isn't the case. In fact, dozens of ramp-related food festivals have been held in ramp-heavy communities for at least the past half century. The Cosby Ramp Festival has been held in Cosby, Tennessee on the first weekend of May every year since 1954, hosting as many as 30,000 ramp lovers in 1959.

"Does that sound like a passing fad to you?"

Does that sound like a passing fad to you? Are we having the wool pulled over our eyes, being tricked into paying top dollar for a vegetable that is at best average? Quite the contrary, I think we're lucky to have finally, as a population, discovered how wonderful ramps actually are. You may argue that they only taste special to us because of their short season. And to this I concede: they do taste better because of their short season, but this is no defect: That their short season makes them even more special in our eyes is just the icing on the cake.

This morning's somewhat reactionary New York Times article suggests that our love for the wild onions is perhaps growing a bit too strong, resulting to over-harvesting that could lead to a ramp shortage a few years down the line. It quickly goes on to say that there is little evidence either way, and points out that there are currently no quotas set for the number of ramps you can harvest. If we are wise, it's probable that such controls will be put in place in the near future, which'll make the already tough-to-find vegetables even harder to find and more expensive. I don't think this is necessarily a bad thing.

The perception of flavor is not an empirically measurable value. It's a complex thought process defined just as much by our perception and our upbringing as the physiological reactions taking place on our tongues, soft palates, and noses.

So there is nothing wrong with appreciating something for its scarcity, for saving the marshmallows until the end of your bowl of Lucky Charms. Remember back when there were about two green M&M's per pack? Remember how valuable they were—how much better they tasted? These days, green M&M's are a dime a dozen—no more special than their brown, beige or yellow brethren. I wish that green M&M's were still scarce. I'm not even sure that I want to have the option of buying mealy fresh tomatoes in the middle of winter, of buying starchy asparagus in the fall.

While the convenience and freedom that these marvels of modern farming offer us is incredible, they also end up allowing us to forget exactly what a really ripe tomato bursting at the seams, a stalk of sweet, picked-this-morning asparagus, or a chin-dripping peach (so fat with juice that it weighs down the branch of a tree) are supposed to taste like—flavors that we, happily, are finally beginning to rediscover.

I want my ramps to taste special. I appreciate them more because I have to make a conscious decision to spend a few more dollars on them than I would for any old onion. I like that I have to wait for them every year, and I love that when they finally come, I'm forced to test my culinary prowess to the full, discovering as many uniquely delicious ways to use them as I can before the short-lived jag is over.

Of course, there are those who'd claim that unless I grew up in Appalachia, unless I've tasted a ramp pulled straight from the swampy earth with my own two hands that I've only ever tasted a vague shadow of a ramp, and to you I'd say, awesome. You mean ramps can taste even better than they do now?

In my book, anything that makes food more special—even if it means making it harder to obtain—is a good thing.

And by the way—try adding sauteed ramps to your dumpling filling. It's killer. 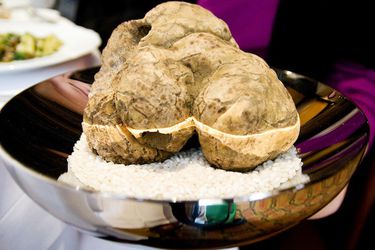