If you only know endive as a crunchy, leafy, bitter green, then you've been missing out. Big time. Sure, it's great in salads or stuffed with goat cheese and walnuts. But roasted, grilled, or sautéed, the wide-leafed fall vegetable loses much of its trademark bitterness, allowing its sweet, faintly earthy character to emerge in full force.

This particular recipe was inspired by a meal I had while studying abroad in Paris. My host mother made what was admittedly a far more elaborate rendition, involving an artful spiral of leaves, baked to a caramel-brown over the surface of a flat, goat cheese-encrusted tart. It was sweet, tangy, rich, elegant, and profoundly satisfying. But impatient and eager cook that I am, I've slowly chipped away at the original recipe until the technique is imminently more achievable, while still capturing the same robust, comfort-food quality of the original. If anything, it's only gotten heartier and more quiche-like as time has gone on. This dish is many things, but it is decidedly not diet food.

The crust for this tart takes a little work, even if you're using a pre-made or store-bought pie dough. Here, I used Kenji's recipe for easy pie dough, which is indeed easy, but requires a few hours to chill in the fridge. It's a food processor pâte brisée: simple, buttery, crumbly, not too sweet, and very, very delicious. But because the filling goes in relatively wet, I've found the blind-baking the crust—cooking it partway before adding the filling—yields a far more crisp and flaky final product; skip this step and you'll wind up with a delicious but mushy-bottomed dish. If you've never blind-baked before, you'll want to take a couple of precautions, either docking or weighing down the crust before putting it in the oven. Because I'm anal, I actually do both—without one or both measures, steam builds up from the evaporating water molecules in the dough, leaving you with bubbles or, worse, one big puffy pocket in the middle of your pie.

To dock, just poke rows of holes into the base of the crust with the tines of a fork (unless you're extra-fancy and have a real dough docker). The holes allow any steam to escape, rather than straining against and distending the dough. Some people avoid docking crusts that will be filled with wet ingredients because they worry about seepage, but I've never had that problem here.

Once the crust is docked, I also weigh the surface down for extra insurance. The easiest trick I know is to cut a nice big piece of parchment paper or tin foil and crumple it up before attempting to line the pan—you can always trim away the edges and it's way easier to get it into all the nooks and crannies once it's lost that off-the-roll stiffness. Then fill 'er on up with pie weights if you've got them, or just an ample amount of dried beans or rice if you don't.

After about ten minutes in the oven, I remove the weights and the parchment and let the exposed surface continue baking until it reaches a light golden-brown—another five minutes or so. At this point, I also wrap the edges of the tart crust in tin foil; we'll be cooking it for another 40 minutes once it's filled, and without the foil, I consistently wind up with burnt edges.

While the crust is in the oven, I move on to the filling. Richness is the name of the game here, so I melt a full tablespoon of butter to sauté my ingredients. In a wide sauté pan over medium-low heat, I sweat cored and sliced endives with shallots, salt, and pepper—we want to soften the ingredients, not brown or caramelize them. After about five minutes, when the mix begins to wilt, I toss in minced garlic, a pinch of chili flakes, a splash of tangy-sweet balsamic vinegar, a pinch of fresh thyme, and finely chopped anchovies. Yes, anchovies—five to be precise—which, though virtually undetectable in the final product, make all the difference in the world. I promise, it works. If you're not a fan, this is actually a great way to get your feet wet; there's no fishiness here, just an umami depth that's difficult to replicate.

After about 15 minutes, right around when you're pulling the crust from the oven, you can take the pan off the heat. The endives and shallots should now be fork-tender and sweet, slightly herbal, with a little heat and acidity to keep them in check. If you give it a taste and think the anchovies are still coming on too strong, don't panic. Any sharpness will all but disappear into the background by the time we're finished with them.

What's tricky at this point is wetness—I've found that it can vacillate quite a bit based on quality of the endives and the diameter and depth of the pan. Since there are more liquid ingredients to add, the contents of your pan should be moist but not wet—if your endives are sitting in more than a teaspoon or two of liquid, I'd recommend setting the contents in a strainer to cool.

Either way, step away and let both the filling and the crust to return to room temperature. The next step involves adding cream, Parmesan cheese, and eggs, and we don't want the eggs to start cooking on contact. When everything's neutral to the touch, I mix the endive-shallot mix with a hearty half-cup of Parmesan cheese, a quarter cup of cream, and a couple of eggs. Think of this as a savory custard. Mainly because that's basically what it is.

Now it's lily-gilding time. If you have access to Bucheron—a semi-aged goat's milk cheese—it's worth the extra expense (which, ideally, shouldn't be too great). It has a firmer texture and more complex, funky flavor that plays especially well off of the endives. But regular goat cheese will do in a pinch. In either case, you'll want to slice a log into thin, 1/4-inch rounds and place them over the entire surface of the tart. Make sure that log is well-chilled, though, or it just sort of mushes uselessly onto the cutting board.

If it looks like an unreasonable amount of cheese, you're on the right track. Stick it in the oven on a low shelf and set your timer for 40 minutes. At 20 minutes, take a peek—if it's well-browned, it's time to cover that baby up with some tin foil. Then prepare yourself to wait, because it's going to smell insanely awesome. You're going to want to eat it straight away.

Let it cool, for at least 15 minutes, preferably 20, and as much as a couple of hours. It's good at room temperature. Then again, it's good really hot and it's good after a day in the fridge. Heck, it's just good. The endives are tender and sweet, the cheese tangy, the anchovies just a savory echo of their former selves. And best of all, the surface turns a burnished, golden-brown that's almost as eye-catching as my host-mother's rendition, only a whole lot more decadent. Think of it as the macaroni and cheese of tarts, and you'll start to get the gist. 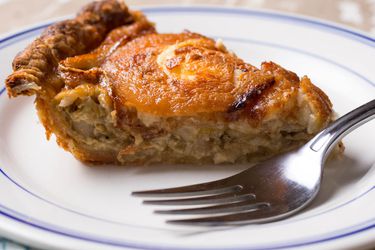