What could be more mortifying, for an eighth grader, than the agony of eating lunch alone? How about a school-wide assembly where you get an award for "Most Quiet"? Welcome to the excruciating but amusing life of 13-year-old Kayla (Elsie Fisher), the star of writer/director Bo Burnham's 2018 film Eighth Grade.

Kayla is a child of the internet. In between active shooter drills and playing the cymbals in the school band, Kayla vlogs. Her life advice videos—"Be Yourself" and "How To Be Confident"—don’t get many hits. But Kayla is optimistic. Her standard sign-off is "Gucci!"

Bravely, Kayla follows the advice of her own "Put Yourself Out There" video. She goes online and researches oral sex. But practicing on a banana is a no go—she hates bananas. Later, a fast food mall meal with high school kids proves that she doesn’t fit in with them, either.

Home is also no haven. Kayla lives alone with her father, who she goes to great lengths to avoid by focusing on her phone. At the dinner table, he actually has to throw food at her to get her attention.

Not all meals are cursed, though. When Gabe (Jake Ryan), an awkward boy her own age, invites Kayla to his house for a take-out dinner of chicken nuggets and French fries, the world starts to shift in her favor.

At first, nervousness gets in the way. Gabe doesn’t know if he should reheat the nuggets in the microwave, and worries that two of every kind of sauce isn’t enough. But they eventually relax, and toast to friendship.

They also forget about their phones, and actually talk to each other. When Gabe brings up a running gag about Szechuan sauce from an animated series they both love, Kayla’s laughter lights up the scene.

Maybe a chicken nugget and French fry dinner can be a turning point in your life, too. Or maybe your inner eighth grader craves a different finger food—foolproof pizza or nachos piled high or a Buffalo chicken grilled cheese sandwich. Or, bypass all of that and head straight for the chocolate peanut butter milkshake. 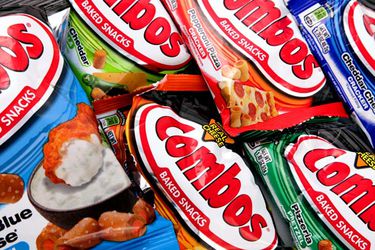