A "meaty" vegan salad that can be a delicious part of a larger spread or a satisfying one-dish meal.

Eetch—pronounced midway between “itch” and “etch” and transliterated into English in just about all the ways you can imagine forming that sound—is a classic Armenian dish consisting of bulgur wheat, tomatoes, and lots of chopped green herbs. It’s often compared to tabbouleh, but unlike tabbouleh, it isn't really a salad, as it's more moist and cohesive. While it can be eaten with a fork, it's more often consumed wrapped with a tender lettuce leaf or a shroud of lavash.

It’s better to think of eetch as a meatless meat dish. Traditionally, Armenians were known for being pious and carnivorous in equal measure, and with some 160 fast days scattered throughout the Armenian Church calendar year (including the 40 days of Lent), they faced near-constant roadblocks to enjoying meat. Which means that Armenians have made vegetarian and vegan cooking something of an art form, and eetch is one of our greatest creations.

Eetch is actually a vegan version of kheyma, a finely-minced minced raw beef (or lamb) and bulgur meatball seasoned with tomato paste, lemon, dried chile pepper, lemon or pomegranate molasses, mild raw onion, and chopped fresh herbs. The mixture is kneaded with water until it becomes tacky and then formed into balls or logs, which are eaten wrapped in lettuce or lavash.

In eetch, the meat is left out. The meatiness and moisture of the dish is instead provided by additional tomato in various forms—paste, canned, and/or fresh—and the fat comes in the form of olive or vegetable oil. The onions are usually cooked rather than raw, which further serves to bolster the meatiness of the dish. And because the mixture lacks sticky meat proteins, it doesn’t get formed into balls; instead, it's spooned into the wrapper.

There are as many versions of eetch as there are Armenian families (more, even—there are at least three that circulate in mine). For my own version, which borrows heavily from several family recipes, I lean on tomato paste for the underlying meatiness and feature fresh tomatoes both in and on the dish. I like my eetch to be moist and yielding in texture, but not wet, making it imperative to avoid canned tomatoes in favor of fresh. The final consistency can be adjusted with water, but only as much as is needed.

Armenians adore herbs and herb salads. While some eetch recipes get just a sprinkling of chopped herbs, I tend to go all-in, using a hefty mixture of whatever tender aromatic herbs I have on hand: flat-leaf parsley, mint, cilantro, purple basil (Genovese basil is unknown in West Asian cuisine), or dill, along with scallions, which are pretty much mandatory. A portion of the chopped herb salad gets mixed into the eetch, and the remainder serves as a topping and garnish for the roll-ups.

About the bulgur: Eetch should have a smooth, almost silky consistency, which requires the use of fine bulgur to achieve. (Fine is also known as “#1” grade, with medium labeled as “#2” and coarse as “#3.") Fine bulgur can be a challenge to find outside of Middle Eastern markets or online retailers; if unavailable, use the finest grade you can locate, and be sure to measure by weight and not volume to keep the total amount in line.

Eetch is usually served as part of an appetizer (meze) spread at gatherings, but it also makes a thoroughly satisfying and quick-to-assemble one-dish meal (which is how it most often appears in our house). And while excellent year round, it’s extra special in the heat and height of summer, when cold dishes are welcome and vibrant fresh herbs, lettuces, and juicy, flavorful tomatoes abound. (When farm fresh tomatoes aren’t available in the off season, grape or cherry tomatoes are an excellent substitute.)

The texture of eetch is best when fine bulgur (“#1” grade) is used. If fine bulgur is unavailable, medium (#2) or coarse (#3) will work, although the results will be correspondingly more coarse and grainy. With other grades, be sure to use an equivalent amount by weight (175g), not volume.

If you can’t find double-concentrated tomato paste, increase the amount to 6 tablespoons.

Use the best quality tomatoes you can find here. In the off-season, when nice globe tomatoes are hard to find, use cherry or grape tomatoes cut into eighths instead.

Genovese basil has a different flavor profile and is not used in Armenian cooking. If purple (also known as opal) basil is unavailable, use Thai basil instead. 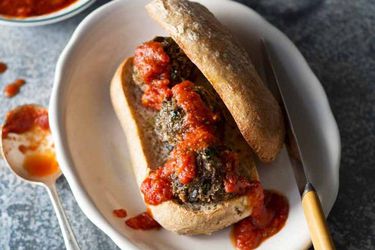 Eggplant Meatballs From 'The VB6 Cookbook'