When I asked all of you to pray for me diet-wise because I was headed to Dallas and New Orleans, I meant it. Here's the kind of thing I'm going to be doing for the next four days: My friend Robb Walsh, restaurant critic of the Houston Press, who perhaps knows more about barbecue and Tex-Mex food than any man alive, picked me up at the Dallas airport yesterday at 5:30 p.m. and announced we were going on a real Fort Worth food tour for the rest of the evening.

By 6 p.m., we put our names on the list at a fried-chicken and chicken-fried-steak roadhouse called Babe's Chicken Dinner House in Roanoke, Texas. While we were waiting for our table, we had a little appetizer of a very fine piece of pecan pie at Granny's Cupboard next door. The smell of fresh-baked apple pie was unmistakable, so we ordered a piece of that as well. The only problem: it was so hot, so fresh out of the oven owner Carol Southern announced: It's not ready to be sliced yet. It will just mush all over the plate. Why don't you boys go eat next door and come back afterwards for your apple pie. Sounded like a plan.

We actually got right in at Babe's (we were after all a party of two—two big hungry men, but two nonetheless). Everybody at Babe's orders the same thing, served family-style: fried chicken, chicken-fried steak, cream gravy, mashed potatoes, canned corn, iceberg lettuce salad with "Eye-talian" dressing, and some crazy good biscuits.

The fried chicken was transcendent: golden brown, crunchy, and greasless on the outside, and tender and juicy on the inside. Predictably, the breast was the least juicy piece, but it wasn't bone dry. The peppery chicken-fried steak was nearly as good. Robb showed me how he likes to eat his, dipping each cut piece into the gravy. Hey, the man wrote the book on cowboy cooking. I can't argue with him. I desperately tried to pace myself because this was just the first stop (well maybe it was the second, the pie place being first).

We did circle back to Granny's Cupboard, where the apple pie was finally ready to be sliced. It was a top ten apple pie, and, Lord, I have tasted many apple pies in my life. This one had a flaky all-butter crust that rocked, and the apples were cinammony and just firm enough.

Our next stop was Caro's, a seminal Tex-Mex restaurant that has been owned and operated by the Whitten family since 1954. There we were meeting Bud Kennedy, who writes the Eats Beat column for the Fort Worth Star-Telegram there. Bud made it three hungry boys on the prowl. I liked Bud right away. He's not a restaurant critic, he's just a serious eater with a platform and a point of view: "I'm a brown-food man all the way. If it's fried or barbecued or baked, I'm all over it."

Caro's was the first Tex-Mex restaurant I've ever been to that I would call "serious." Robb was touting the tostadas (above), the chips they bring out before you order, and in one bite I knew he was right. Tostadas are bits of raw tortilla dough that are deep-fried, so they get all puffy and flaky and good. They were so fine I felt my restraint and discipline slipping away. Don't let me eat any more of these, gentlemen. My regular combo plate included an enchilada, a tamale, a killer taco made with a puffy taco shell cooked the same way as the tostadas, and fantastic lard-laced refried beans. Even the rice tasted good. Robb had fideo (right), basically spaghetti with chili ladled on top. Sounds silly and awful, but it tasted pretty good.

To complete the Fort Worth exploration portion of the program, we headed out to Railhead Smokehouse BBQ. We would have gone to the world-famous Angelo's, but it's closed on Sundays. The Railhead looked and felt like a generic pre-fab 'cue joint (the original in Fort Worth apparently looks and feels like a real barbecue joint), and the food was pretty disappointing except for the ribs and slaw. The brisket was shriveled and dry. It tasted like it had been sitting under a heat lamp all day.

The Best Hamburger in the U.S.? I Couldn't Eat It

While we were having our 'cue, Robb and Bud started talking about Kincaid's, a Fort Worth institution that they both said might make the best hamburger in Texas, and which would therefore be, by their reckoning, the best hamburger in the United States of America. I asked if Kincaid's was open on Sunday. Robb said it was and said, shoot, we just about went right past it on the way here. They may be closed now. He called and, alas, no one answered the phone.

We got back in the car for the hour-long drive back to Dallas. Passing through downtown Fort Worth, Robb insisted on stopping for dessert at Brajas, a three-story restaurant that looked more like a Wild West museum. "I'm sorry, Ed. I can't have the night's serious eating end with that Railhead barbecue. They have fantastic desserts at Brajas."

We ordered the dessert sampler, which consisted of a dessert taco, molten chocolate cake with vanilla ice cream, apple crisp with ice cream, pecan pie with a different flavor of ice cream, and a chocolate tamale bread pudding. We each took a spoonful or two of each before calling it a night. It was definitely last call for our stomachs.

Robb dropped me off at the hotel and handed me the leftover fried chicken. Nothing better than cold fried chicken for breakfast in your hotel room. The man is right. What can I say? He's a serious eater par excellence. 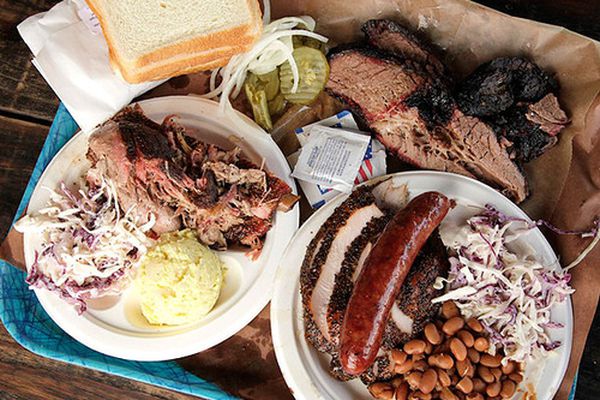