A smoked feta tart that showcases the best tomatoes you can find while they're in season.

As a kid who loved animals and science, it was always one of my dreams to visit the Galápagos Islands, and a few months from now, thanks to the tireless last-minute organizational skills of my mother and my wife, it looks like it may actually happen. This both excites and frightens me. I have very distinct pictures in my mind of what it's going to be like, and the thing is, I really like those pictures. Most likely, the reality will be completely different—hopefully different in a just-as-good-or-better way, but you never know.

Similarly, I've never actually had the tomato and smoked feta tart from Dirt Candy, a dish that Max told me he would "forever and always love," but nevertheless, I think I like it. Sure, tomato and feta tarts don't exactly compare to the cradle of modern evolutionary science, but as soon as Max mentioned the concept to me a couple of weeks ago, it was so instantly appealing that I started building a prototype of it in my head. A prototype that I very quickly translated into reality with yet another batch of fruit from my neighbors' prolific tomato vines.

Okay, in my usual style, it ended up being several realities. I made a bunch of tarts before the one on my counter finally meshed well enough with the one in my head to be called finished—but you get the idea.

This is one of my new favorite simple, end-of-tomato-season dishes. It's got only about a half dozen main ingredients, but it's the way you treat them that makes it unique.

I knew the smoked feta aspect of this was going to give me a bit of trouble, so I decided to start with the tomatoes first and leave the cheese until the end.

On my first attempt, I tried simply layering tomatoes into a basic butter-based tart crust, drizzling them with olive oil, and throwing the pan in a 400°F oven, timing it until the bottom crust was crisp and the tomatoes lightly caramelized and jammy. Half an hour passed, and the tart was essentially tomato soup. At 45 minutes, thick tomato soup. Then a full hour. An hour and 15. Still watery. It wasn't until a full hour and 45 minutes had passed that the tomatoes' liquid had finally evaporated to the point where I figured I could slice the tart without the tomatoes spilling all over the place. Of course, by that stage, the crust had dried out and was actually burnt in spots on the bottom. To make this tart work, I'd have to find a way to rid the tomatoes of some of their excess moisture.

By salting the sliced faces of the tomatoes thoroughly and letting them rest on paper towels, I found I could remove as much as 20% of their moisture, giving them a big head start on their path to jamminess.

Blotting the tops of the tomatoes and pressing down on them firmly but gently helped that process along. With my newly concentrated tomatoes, I could cut the cooking time down to just under an hour, which happened to be just the right amount of time for the crust to crisp up but not burn.

To lend extra flavor to the tomatoes, I also sprinkled them with some roughly chopped oregano and thyme.

Now for the more difficult element: the smoked feta. For the last couple of years, I've been experimenting with a variety of methods for smoking cheeses, ranging from true smoking with an outdoor smoker to using high-tech tools like a Smoking Gun, to indoor smoking in a wok. Some methods work better than others, but none seem to hit that balance between foolproof, low-effort, and great results.

But you know what does? Liquid smoke.

As I mentioned in my guide to sous-vide barbecue ribs, liquid smoke is chemically nearly identical to actual wood smoke, and, when used in small amounts and applied to foods before cooking, it can be nearly indistinguishable from the flavors provided by actual smoking.

So I tried adding a bit to the salty brine the feta was packed in. It worked out wonderfully, giving the feta a gentle smoky aroma that complemented the sweetness of the tomatoes. Simply crumbling it and placing it over the tomatoes was an effective method.

I was pretty happy with the tart at that point. Sweet, jammy tomatoes, plenty of herbs (after I decided to add some chives, parsley, and mint at the very end), the smoky feta, and a crisp, buttery crust. Still, I felt like it could use one more flavor—something sharp and strong to really accent the other flavors. I considered capers, olives, anchovies, and hot chilies before I remembered one of David Lebovitz's blog posts from five years ago. In it, he describes a similar tomato tart he made that's topped with goat cheese and honey, but the real kicker is what he put under the tomatoes: mustard.

In his recipe, he adds a good amount of Dijon. In mine, I like to use the mustard a bit more sparingly, and opt for whole-grain instead. But whatever mustard you use, it's really remarkable what a little bit of heat and pungency can do to bring out all the other flavors in the dish. After all, what would great sashimi be without the tiniest pop of heat from wasabi?

That mustard was the last kick in the pants that this great late-summer dish needed. Spicy, sweet, salty, buttery, smoky, and tart—there's an awful lot of stuff going on in here, but only a couple of ingredients that you won't find in your everyday pantry. This is the kind of recipe that's custom-made for an informal dinner party.

I liked this tomato tart so much, I'm now almost afraid to go try the one at Dirt Candy, lest it force me to change the way I make the one I've become so happy with. But I suppose inevitable change is the way any good recipe evolves. 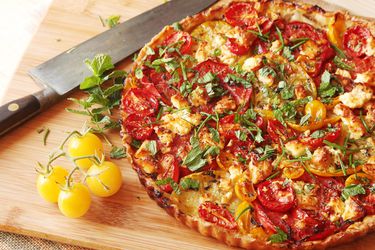