There was a period in my life when I spent a lot of time catering fancy parties, which meant I spent a lot of time cooking hundreds of portions of teeny-tiny hors d'oeuvres. Pork rillettes—a creamy spread from France—were a godsend in those situations. They're cheap, they're delicious, they sound fancy, and most importantly, they seem like the kind of thing that takes a lot of skill and training to make, yet nothing could be further from the truth. It's hard to think of an hors d'oeuvre that's easier to make in bulk. If you've ever wanted to dip your toes into the waters (or should I say warm rendered fats?) of French charcuterie, or if you're really in the mood to impress your friends and family with little to no effort, rillettes are the place to start.

Rillettes are essentially whipped confit (meat that has been slow-cooked in its own fat), so making pork confit is the first step. If you wanted to go the old-fashioned route, it would begin with generously salting the pork and allowing it to cure for a few days before cooking, but that step is really only necessary if you plan on storing the rillettes in a medieval French cellar for a few months. Does that sound like you? No? Good, let's skip the curing then.

There are a number of ways to confit pork—including on the stovetop simmered in its own rendered lard—but I find that the easiest, most foolproof, and most inexpensive way is to use the same technique I use in my carnitas recipe: packed tightly into a casserole dish or Dutch oven.

By packing chunks of pork shoulder tightly together, you end up needing very little added fat—just enough to submerge the meat will do. I like to nestle in a few bay leaves, a few sprigs of thyme, some shallots, and some garlic to lend extra flavor to the pork. If you want to get a little more medieval on that pig, try adding a few warm spices like cinnamon, cloves, or mace.

Once the aromatics are in, I transfer the pork to a 275°F (140°C) oven to slow cook until the pork is completely tender. This takes about three hours or so. (A little longer won't hurt it much—rillettes are more forgiving than most other braises.)

You with me so far? Good, because it's about to get much, much harder.

Wait. Strike that. It's easy all the way until the end.

Once the pork is cooked, I transfer it to the bowl of a stand mixer fitted with a paddle attachment (if you want to exercise your forearms, a large bowl and a potato masher will do as well), then get it whipping.

The meat should shred up really easily and before long it'll start to form a light, pale pink spread. The real key to great rillettes is incorporating the right amount of fat and juices. While the meat is shredding, I strain the leftover juices from the pan, then slowly drizzle them into the meat with the mixer running, stopping it after every few tablespoons to check on the texture. The final texture is up to you, but I like my rillettes light and loose enough that they can be easily spread with a spoon or knife on a piece of toast. They should come out almost fluffy.

Finally, I season the rillettes with a good amount of kosher salt. It's important to season rillettes quite aggressively because you make them warm but serve them cold, and cold temperatures have a tendency to suppress flavor.

If you like, at this stage you can gussy up the rillettes any way you'd like. A sprinkle of grated nutmeg is traditional. I like to add picked thyme leaves and finely minced sautéed shallots, or a brunoise of mirepoix vegetables (onions, carrots, and celery). But don't feel that you have to. It's totally fine to leave the rillettes plain—you can always pair them with other flavors down the line when you're serving.

If you're going to serve the rillettes soon, you can put them in a bowl or ramekins and let them cool in the refrigerator for a couple of hours, or you can pack them into jars to give away as gifts (as I often do), or to serve later. To pack them, push the mixture down into the bottom of a glass jar, spooning it in a little at a time and doing your best to press out any air bubbles (a few bubbles are okay, but the more bubbles you have, the shorter its shelf life will be).

Smooth the top over with the back of a spoon, then pour some remaining fat on top and seal the jar. That fat will help keep bacteria out of the rillettes and prevent the top surface from oxidizing. Stored in the refrigerator this way, rillettes should last at least a few weeks. (This is another reason why salting aggressively is important: The salt keeps bacteria at bay.) When you're ready to serve, just open the jar and put it on the table. The fat can be scooped up with the rest of the rillettes and spread on crackers or bread.

Rillettes are great served with crackers or a nice rustic loaf of bread, along with cornichons—those vinegary little French pickles—whole grain mustard, and fruit preserves. Oh, and maybe a beret and some light French jazz playing in the background.

You can also make the rillettes with a potato masher in a large bowl if you do not have a stand mixer. 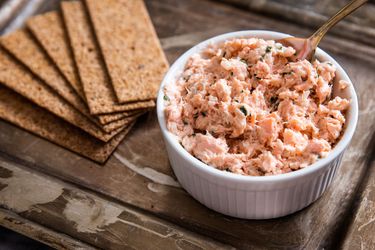 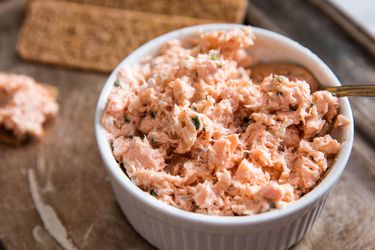