Both ingredients will benefit from a few minutes in the oven, which crisps up the pecans and lightly toasts the sugar for enhanced flavor. I like to do this in a skillet because it's just the right size for this recipe, and its shape will come in handy later on (trust me). If you happen to have toasted pecans on hand already, it's okay to skip toasting the powdered sugar; I don't feel the slight boost in flavor is worth the inconvenience, though it's a nice touch if you're toasting the pecans anyway. This takes about 12 to 15 minutes in a 350°F (180°C) oven, depending on how accurate it runs, or just until the pecans are fragrant. If they're too dark, the pecans can make the cookies astringent and dry as they continue to cook in the oven.

If you don't normally enjoy the taste of powdered sugar, try making these cookies with organic powdered sugar, which has a more nuanced flavor thanks to the natural molasses content in raw cane sugar (more on that here). 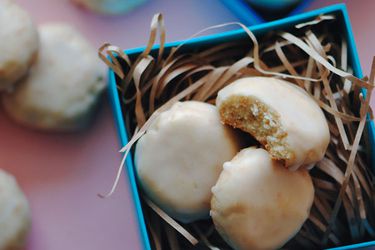