A buttery and tender cake topped with a spiced crumb topping is the perfect accompaniment for a cup of coffee.

Stella Parks
Editor Emeritus
Stella Parks is a CIA-trained baking nerd and pastry wizard, dubbed one of America's Best New Pastry Chefs by Food & Wine. She was the pastry editor at Serious Eats from 2016 to 2019.
Learn about Serious Eats' Editorial Process
(18)
0

Coffee cake is a thing of beauty, with big boulders of brown sugar and cinnamon strewn over a thick sheet of buttery vanilla cake, just sweet enough to offset a steaming mug of black coffee. There's no need to wait around for the end of a meal; this is a treat best served for breakfast or an afternoon snack. It's basically day drinking, but for cake, and I am 100% all about it.

Whether I'm making pumpkin muffins or a rhubarb crisp, I always cut down on cleanup by starting with the streusel, allowing me to reuse the same bowl for the main event, and my coffee cake is no different.

For the crumb topping, I opt for a mixture of light brown sugar, whole wheat flour, and cinnamon for a graham cracker–like vibe, but I also add a pinch of cardamom. The cardamom goes all but unnoticed until that first sip of coffee, at which point it suddenly opens up the aromas of cinnamon and coffee in a really magical way. There's plenty of salt for balance, and, of course, a bit of unsalted butter, too—less than I'd use in the topping for a lean fruit crisp, as the cake itself here is plenty rich.

Though you can certainly make it by hand, the topping comes together quickly in a stand mixer fitted with a paddle attachment. Once it forms a crumbly dough, I scrape it onto a plate and wipe the paddle with a paper towel—no need for a proper wash until after you've made the cake.

As with any cake, temperature is important to keep in mind when assembling ingredients from the fridge. A lot of recipes specify nothing more than "room temperature" for things like butter and eggs, but that's a pretty subjective thing. Instead, I aim for about 65°F (18°C). This can be done passively by setting everything out a good while in advance, but I prefer a more proactive tactic. A microwave can handle the dairy without much fuss, while for eggs, I've found that a two-minute dunk in hot tap water (about 110°F/43°C) is just about right.

Other recipes may approach things differently, using colder butter and warmer eggs, or vice versa, so my method isn't a universal rule of thumb. But in most cases, the idea is to end up with a batter temperature of between 68 and 70°F (20 and 21°C), which leaves plenty of wiggle room so long as you make a good-faith effort to stay in the ballpark.

For coffee cake, I like to use Greek yogurt rather than the more traditional sour cream. First, Greek yogurt contains more protein overall, which can help with structure, but it specifically contains more casein, a protein that can improve moisture retention and volume in cake. Greek yogurt is also strained, which means it has a higher concentration of lactose, the milk sugar that gives dairy such a delicious flavor as it browns. And it's slightly tangy, so it rounds out the sweet richness of the cake.

With the toppings, temperatures, and ingredients squared away, the method for the cake itself is pretty straightforward: Cream the butter and sugar (along with baking powder and salt) until it's soft and light—you can read a full breakdown of the creaming method here. Then add the eggs one at a time, followed by alternating additions of all-purpose flour and Greek yogurt.

When the batter is smooth, scrape it into a parchment-lined aluminum pan. No need to fuss; just tear off a sheet of parchment and cram it into the corners with your fingers. This makes it easy to pop out the first slice of cake later on, while also helping to keep the outer crust tender and light.

On that same note, it really is important to use an aluminum pan rather than one made from dark metals or glass, both of which can result in a tough outer crust. My favorite is this pan from Fat Daddio's, which happens to be my go-to brownie pan as well. (Read my full post about the properties of cake pans here.)

Spread the thick batter into an even layer, then cover with the prepared topping, squeezing with your hands to create new clusters, or using your fingers to break apart big lumps. There's no right or wrong way to go about it, so create whatever sort of texture you prefer.

It may seem a bit sandy at first, but the topping will absorb moisture from the batter in the oven, binding it all together later on. Bake at 350°F (180°C) until the coffee cake is puffed, firm, and golden around the edges, about 40 minutes or to an internal temperature of about 200°F (93°C).

The aroma of butter and cinnamon will be unbelievably tempting, but let the cake cool before you dig in. Hot from the oven, it'll be too soft and squishy, making every bite feel gummy and wet. After about 30 minutes, the cake will have set up nicely and still be comfortingly warm.

Greek yogurt keeps this coffee cake tender and moist for days, so it's A-OK to bake it the night before, then wrap the pan in foil so you can enjoy it in the morning. If you do serve it right away, don't cut the whole thing all at once; the fewer surfaces are exposed to air, the better, so cut only what you need.

Admittedly, though, you may find you need a second slice. It really is that good.

For the Coffee Cake:

This recipe works best with a strained Greek yogurt, like Fage or Chobani, that contains nothing more than milk and active cultures. Avoid imitations thickened with gum, gelatin, or pectin.

To quickly bring refrigerator-cold eggs to the desired temperature, simply submerge them in a vessel of hot tap water for about two minutes.

The prepared crumb topping can be transferred to an airtight container and refrigerated for up to one week, or frozen for six months.

Wrapped tightly in plastic, leftover slices of coffee cake will keep up to three days at room temperature. 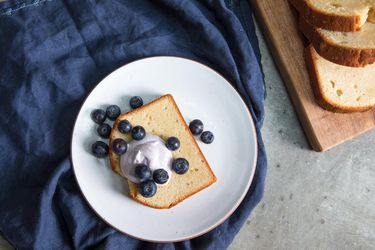 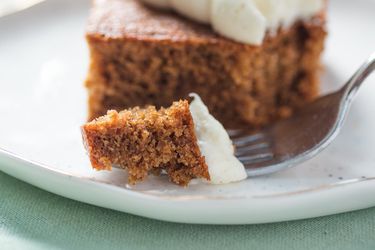 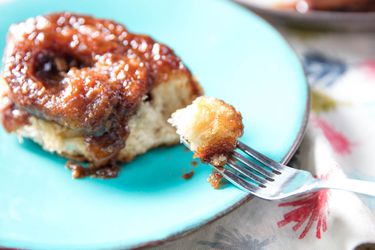