The thick and gooey caramel sauce of your dreams is easier and faster than you think.

Stella Parks
Editor Emeritus
Stella Parks is a CIA-trained baking nerd and pastry wizard, dubbed one of America's Best New Pastry Chefs by Food & Wine. She was the pastry editor at Serious Eats from 2016 to 2019.
Learn about Serious Eats' Editorial Process
(21)
0
In This Recipe

When the weather starts turning cool, it pays to keep a jar of caramel on hand. Maybe it's my professional bias, but stirred into coffee, drizzled over thick slabs of banana bread, or as a syrup for yeast-raised waffles, caramel sauce makes everything taste more cozy and autumnal.

Caramel has gained an unfortunate (and undeserved) reputation for being somewhat tricky, but that couldn't be further from the truth. Caramel is insanely fast and easy to make at home, a three-ingredient affair—nothing more than sugar, water, and cream. Okay, okay, salt and vanilla, too, but it hardly seems fair to count the seasonings.

In fact, caramel is so deliciously pure and simple that I need to take a moment to dismiss some of the wonky ingredients and techniques that can lead you astray. From overcomplicated recipes to "tips and tricks" that simply miss the mark, here are five ways you can "just say no" to fussy caramel.

Listen, it's called caramel, so any recipe that starts with brown sugar is a total sham. Caramel is the rich and nutty substance produced by cooking sugar until it breaks down, so you can't fake it with molasses just because both happen to be brown. There's absolutely no comparison between an acidic brown sugar syrup and the mellow, toasty flavor of a true caramel. Even if you tried it, the fructose and organic compounds in brown sugar would smoke and burn long before the sucrose could brown.

Real caramel is nothing but pure sugar that's been caramelized, either on its own or by dissolving it in water and boiling it dry. The former can be difficult to pull off without a gas stove and the right sort of pan, while the latter is dead easy regardless of what equipment you have on hand. While a lot of chefs prefer the "dry method" because it's so fast, there are a number of real advantages to cooking a caramel "wet."

As mentioned, it's a much more forgiving style when it comes to the particulars of your equipment, but it's also an easier technique to manage while you're multitasking—the perpetual state of things in almost any kitchen. Aside from that, it allows for a great deal of precision, as you can cook the caramel syrup to the exact shade you prefer, whether that's a foxy amber or the palest honey-colored hue.

Because I know someone's bound to ask, let me go ahead and say that I've got a philosophical gripe with making caramel from toasted sugar. If you're not already familiar with my technique, it involves roasting granulated sugar in a low oven for up to five hours, producing a type of caramel that's powdery and dry.

That makes it a great ingredient for cakes, cookies, and frostings that rely on granulated sugar for structure, but given the level of investment involved, the last thing I want to do is waste that labor of love on a liquid caramel. Especially considering that traditional techniques can turn plain white sugar into a liquid caramel in 10 minutes flat. So save toasted sugar for recipes befitting its powdery nature, like, say, angel food cake.

There are few people in this world who love corn syrup as passionately as I do. Just as Kenji clings firmly to his beloved MSG, I always keep corn syrup on hand—I wouldn't dream of making nougat, peanut brittle, or Cracker Jack without it. So it's without any sort of negative bias that I'm compelled to say: Corn syrup has no place in caramel.

That's because caramel sauces and candies are what professionals call a "noncrystalline confection." Due to its relatively low sugar saturation and its comparatively high percentage of fat, this type of caramel isn't conducive to the formation of sugar crystals. Since it's so easy to make a flawless caramel without it, I view corn syrup in caramel as a needless complication, with no obvious benefit.

In many recipes, you'll be asked to use a damp pastry brush to wash down the sides of a pot. This is a vital step in any supersaturated candy so loaded with sugar that it teeters on the brink of crystallization. Think fudge, marshmallows, and fondant. But again: Caramel sauce is noncrystalline, so you don't have to go out of your way to keep it creamy. All you have to do is make sure the sugar is dissolved, so just give it a stir while the water comes to a boil.

It should be fairly obvious that stirring is a great way to help the sugar dissolve, but I've seen a freakish number of recipes online suggesting that stirring is a major no-no, and that the sugar and water should be "swirled together" instead. My only response is a massive "au contraire." Caramel may be a noncrystalline candy, but if the sugar isn't fully dissolved in the first place, well, you're going to have problems.

Compared with just stirring two ingredients together like a normal person, swirling is vastly less effective, and far more likely to splash sugar crystals onto the sides of the pot. What I will say is that swirling the pan is an A+ way to ensure even caramelization once the sugar syrup has begun to caramelize, simply because stirring will coat your spatula in a thick candy shell.

Not that there's any need for even caramelization, though! If the syrup turns pale in some places and dark in others (as in the video above), the flavor will still average out into something deliciously complex.

Okay, this is a controversial one, but here's the deal: Butter is a relatively delicate emulsion of fat and water. So delicate, it breaks as soon as you melt it, never to become creamy and smooth again.

While butter's still a champ in all sorts of pan sauces, caramel is well over a hundred degrees hotter than any roux or beurre blanc. The shock of hitting a 350°F (177°C) pool of caramel can turn butter into a greasy, broken mess. Not saying it can't be done; only that it's not a great choice for beginners.

Cream, on the other hand, is stable enough to splash into a batch of screaming-hot caramel without breaking a sweat. Even if it weren't 100% easier to work with, cream would still be my number one choice for caramel, because it contains far more lactose than butter.

As you may recall from previous posts on the Maillard reaction, lactose is the milk sugar that browns to form the toasty, malty toffee notes of dulce de leche and cajeta. When you make caramel with cream instead of butter, lactose helps the syrup develop more of those nutty, butterscotch-y flavors as it bubbles up to its final cooking temperature. The result is an exceptionally well-rounded caramel that's even more nuanced.

Of all the recipes I know, caramel is among the least mysterious and most predictable. Yet for a lot of people, the very idea is intimidating. A major factor seems to be this notion that you may wind up with a caramel volcano overflowing the pan, bubbling into every nook and cranny of your stove, then dripping down to leave you with third-degree burns on your toes.

The only reason for that kind of nightmare scenario is a recipe writer who neglects to tell you what he means by a "medium pot." Relying on subjective terms to describe the equipment required to contain a dangerously molten candy is, quite literally, a recipe for disaster. Which is why I go to the trouble of specifying a three-quart stainless steel saucier. Yes, the caramel will bubble and foam, but it won't get away.

You can feel free to use a pot that's even larger; just don't downsize, or you risk almost-certain overflow. And if you're not able to use stainless steel? Just be aware that different materials conduct heat at different rates, which will throw the estimated cook time off base, so you'll need to rely on your own judgment as you continue to cook the caramel down.

The final cooking temperature of caramel or candy is directly tied to the amount of moisture left in it, and thus its texture upon cooling. I like to take caramel sauce to about 225°F (107°C) so it's nice and saucy even at room temperature, but aim five degrees lower if you want a pourable consistency straight from the fridge, and about five degrees higher if you'd like it to turn chewy and thick over ice cream, or if you'd like to doctor the sauce with a splash of bourbon or rum.

Once you've reached your desired consistency, cool the sauce to room temperature before refrigerating it in an airtight container, where it'll keep for up to one month.

Consider this post the tip of the caramel-coated iceberg, as I delve into all sorts of caramelly treats in the months to come, from caramel apples to homemade Milk Duds. Until then, get a batch of classic caramel sauce under your belt, and discover how easy the real deal can be.

How to Make Caramel Sauce in 15 Minutes

When it comes time to add the cream, you won’t have a second to spare, so be sure to have it scaled out and ready to go! 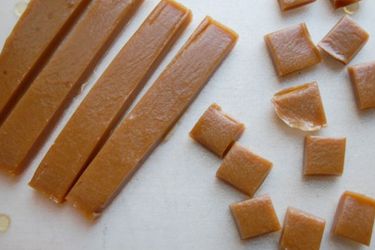 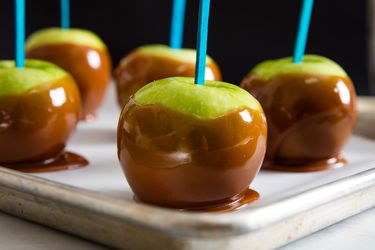 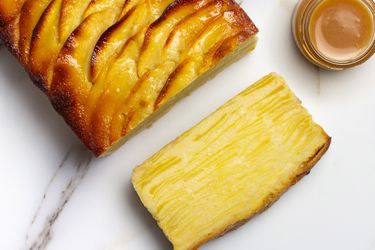