Because there are cake and yeasted and crullers and fritters, cider and potato and sour cream, malasadas and beignets and churros—wait, do we count churros? We'll get to that later.

Come meet all the different doughnuts in this great land. (And add your own favorites in the comments.)

How Do You Spell It?

A doughnut that uses yeast as a leavener, resulting in a light, airy doughnut. They often have stretchy (rather than crumbly) interiors and feel lighter in-hand. Many other types of doughnuts, including jelly doughnuts or cream-filled, tend to start from a yeast doughnut base. Also called "raised doughnuts."

Doughnuts made from a cake-like batter, leavened not with yeast but baking powder or soda. The resulting texture is denser than a yeasted doughnut, and often a bit crustier. Other subsections of doughnuts, including cider doughnuts and old-fashioneds, fall entirely within the cake doughnut territory.

A "glazed doughnut" commonly refers to a plain, yeasted doughnut in a sweet sugar glaze, though many other types of doughnuts have glazes, as well. (Like a "cheese slice" refers to pizza with just tomato sauce and cheese, though many pizzas have both tomato sauce and cheese in addition to other ingredients.) Just about every American doughnut shop will make some version of these.

Chocolate glazed is a common variant, a plain yeasted doughnut with a chocolate-flavored glaze, though in this case, the chocolate tends to glaze only the top, rather than over the entirety of the surface; sides and bottom are left unglazed, or treated with a plain sugar glaze.

A twisted fried doughnut, either in a ring shape, or in a long straight strip. In New England, they tend to be oblong and twisted (the Dunkin' Donuts cruller, now retired, was of this form). To those who understand "cruller" as only oblong, as below, French Cruller may suggest any ring-shaped cruller. However, it's got another definition...

Generally understood to be a ring-shaped cruller of choux pastry (the same dough used to make profiteroles; those pastries are baked, whereas French crullers are fried).

Elsewhere, this might be called a French doughnut or French Twist.

A long un-filled yeast doughnut twisted around itself, resulting in a long cylindrical doughnut. May be glazed or chocolate-glazed, maple-glazed or sugared.

A round doughnut rather than a ring shape, generally yeasted, with a center of jelly, jam, or preserves. Often glazed or coated in powdered sugar. Variations include Berliners, bomboloni, paczki, and sufganiyot (below).

Any doughnut, generally yeast and sometimes glazed, with a cream-based filling, often sweetened and/or otherwise flavored.

Made to resemble a Boston Creme pie; a filled doughnut with a vanilla custard filling and a chocolate glaze on top. (Remainder may or may not be coated in a sugar glaze.)

A long, bar-shaped raised doughnut, generally iced. Also called sticks or bar doughnuts; filled ones are, in some places, called "eclairs" (but differ from the common definition of that pastry, which is made from a choux dough and baked).

Made by incorporating chunks of apple into a doughnut batter, then dropping portions of that batter into oil, for an irregularly shaped, somewhat jagged pastry. Generally either glazed or topped with sugar.

Apple fritters in the Netherlands are called Appelflappen, which I just had to mention here because man, we should all start calling them that.

A wide, flat doughnut resembling, unsurprisingly, a beaver's tail; dough balls are rolled out and stretched before they're fried. Generally sugar-coated and covered in various sweet toppings. The Canadian pastry chain BeaverTails Canada has copyrighted the name and popularized the form, but "beavertail" is a generic term as well.

Cake doughnuts generally made around the apple harvest season, particularly in New England and the Northeast; they include apple cider in the batter along with cinnamon and nutmeg. Some are covered in sugar or cinnamon-sugar.

Not the sticky bun sort; many doughnut shops will have circular doughnuts with a spiral of cinnamon or cinnamon-sugar, made of doughnut dough and fried in the same manner.

Cake doughnuts that use mashed potatoes or potato starch, replacing some or all of the flour in the dough. They tend to be lighter than other cake doughnuts, with more contrast between interior and exterior.

A chain of potato doughnut shops called "Spudnuts" was established in the 1940s. That company has gone out of business, but a few dozen shops kept the name, and are now independently operated.

Cake doughnuts that incorporate sour cream into the batter; often glazed or topped with powdered sugar or cinnamon.

Small, spherical doughnuts meant to represent the hole "missing" from the doughnut (whether or not it is actually made of "leftover" dough punched from a larger ring-shaped doughnut). Can be yeasted or cake, glazed or sugared. Sometimes generically known as Munchkins or Timbits, the names given to them by large doughnut chains (Dunkin' Donuts and Tim Hortons, respectively).

Any small doughnut in a traditional ring shape, generally about 1.5"–2" in diameter. At many outlets that sell them, often fried to order and served straight from the oil. Due to their size, the "hole" of the doughnut often collapses into the rest, leaving little space in the middle.

It's traditional to eat doughnuts on Fat Tuesday before Lent, intended to use up all of a home's sugar, butter, and lard before the Lenten fast. (We'll see other examples of this below.) They're known as Fasnacht in Pennsylvania Dutch country, and Kinklings in parts of Maryland, where they might be made with a raised yeasted dough or a potato-based dough.

Portuguese-style doughnuts, raised and solid (no hole in the middle). Though developed in Madeira, they're now quite popular in areas of Portuguese settlement, particularly Hawaii; there, they're served either plain or with various cream- or fruit-based fillings: chocolate, haupia (coconut), mango, passionfruit...

A deep-fried yeasted doughnut, with no hole, of French origin. In the United States, they're most popular in Louisiana and New Orleans in particular, where they're generally served with powdered sugar. In France, beignets are often stuffed with a fruit filling. On restaurant menus, it's occasionally used to refer to many kinds of savory deep-fried fritters: cauliflower beignets, oyster beignets, cheese beignets...

A small filled yeasted doughnut of northern Italian origin, with anything from chocolate to cream to fruit fillings. Often dusted in sugar.

Of southern Italian origin. Similar in size to bomboloni; sometimes unfilled and topped with sugar, sometimes filled with a cream or jelly filling.

A jelly-filled doughnut of Polish origin: flat, round, and glazed. They tend to have a particularly rich dough, a little denser and heavier than that of other doughnuts, and sport fillings of fruit jelly. Popular in many American regions with large Polish communities, particularly just before Lent. We like what SE'r Zinnia1 said about paczki in her part of Michigan: "Around here, everyone is Polish on Fat Tuesday and eats paczki, just like everyone is Irish on St. Pat's Day."

Deep-fried dough balls popular in Greece, Cyprus, and Turkey, generally served in a sweet syrup, either honey-based or sugar-based.

Another round, sugar-dusted fried dough very similar to paczki, but of German origin, generally filled with jam, cream, or chocolate. Made famous in America when John F. Kennedy spoke the words "Ich bin ein Berliner" at the Berlin Wall in 1963; urban legend has it that this really translates to "I am a doughnut." However, a person in Berlin would in fact call himself a Berliner, and tend to use the word Pfannkuchen to describe the pastry, not Berliner (though elsewhere in Germany, Pfannkuchen refers to a pancake. Confused yet?).

In many other parts of the world, this style of doughnut is known as a Berliner, or similar: in Chile, Berlines; in Argentina, Berlinesas; Bola de Berlim in Portugal...

Another German term for doughnut; also the name used in Austria, where they're often filled with apricot jam, as above.

The Hebrew term for Berliner-like doughnuts, fried and filled with custard or jam. Often eaten around Hanukkah, particularly in Israel, as Hanukkah celebrates the miraculous burning of oil for eight days, and fried foods are often eaten during the holiday for that reason.

I don't necessarily think of churros when I think of doughnuts, but they sure fall under the "sweet fried dough" umbrella. Popular both in Spain and much of the Spanish-speaking world, churros are long, ridged sticks of dough fried until very crisp and sprinkled with sugar. Plain churros are often served with thick, rich chocolate for dipping. Others are (depending on the region and vendor) filled with various sweet fillings, such as dulce de leche or tropical fruit-based fillings.

Small fried dough balls that are made differently throughout Latin America; in Mexico, the dough often includes anise and the doughnuts are served with a sweet syrup poured over. (In Colombia, "buñuelos" refers to a savory fried cheese dough, which, for our purposes, isn't really a doughnut.)

Norwegian doughnuts, which tend to be un-iced and, like many of the region's sweets, accented with cardamom.

Small doughnut balls served in Brazil and Portugal; translates to "dreams" in Portuguese.

Also known as yau ja gwai, you char kway, or "Chinese cruller." Long, deep-fried doughnuts that're more salty than sweet, often eaten for breakfast in various parts of China and Southeast Asia (as shown above at a street market in Malaysia). Often served with soy milk or congee (rice porridge).

Doughnuts using mochi flour in the dough, making them a bit chewy.

A popular doughnut from the "Mister Donut" chain all over Asia, made (it's believed) with tapioca flour so that it's a bit chewy.

Any doughnut from a large chain (the largest being Dunkin' Donuts, Krispy Kreme, and Tim Horton's).

Anything sold in a package. Hostess and Entenmann's versions (Donettes and Donuts, respectively) are both rather squishy-crumbed cake doughnuts, in either powdered sugar or a thick coating that's closer to an icing than a traditional glaze.

Any doughnut-like treat made in a manner other than the traditional, such as this version made from Pillsbury packaged biscuit dough.

Doughnuts topped, rather than filled, like this rather extreme version at Gourdough's in Austin, TX.

A doughnut sliced open and used to sandwich a filling.

Any doughnut incorporating the flavors of pizza, such as this "pizza roll" with tomato sauce, ham, and cheese from Mister Donut in South Korea.

A burger with doughnuts (glazed Krispy Kremes seem to be the doughnut of choice) as its bun. Also known as a Luther Burger, FatKreme, or Grizzle Burger.

Ice cream sundae improved by a doughnut as its base.

Any doughnut combining both sweet and savory elements, including the Pizza Roll above; the Kai Young Donut from Dunkin' Donuts in Thailand is "a traditional glazed donut topped with dried, shredded chicken, and finished with a drizzle of Thai chili paste."

There's a whole world of fried dough out there; this guide is just a work in progress. What did we miss? What should be on here? And what's your favorite type of doughnut? Let us know in the comments. 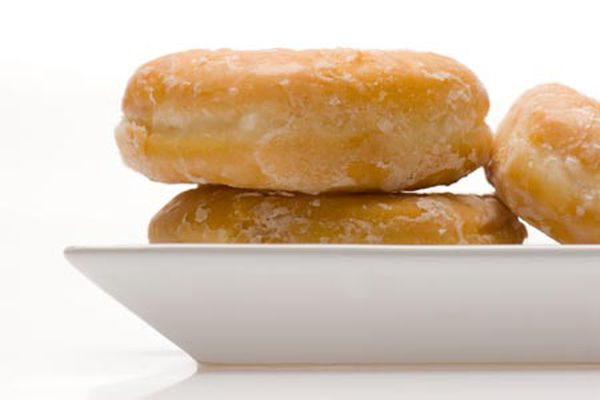 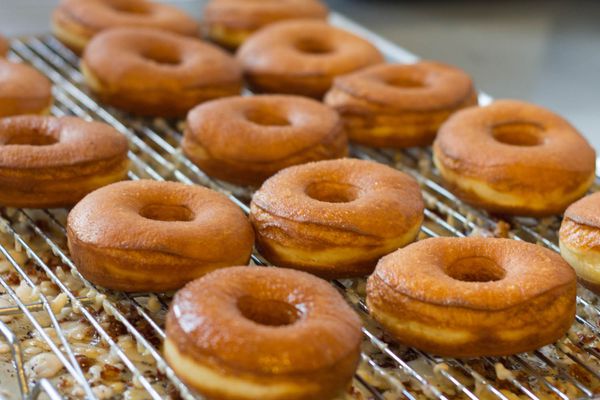